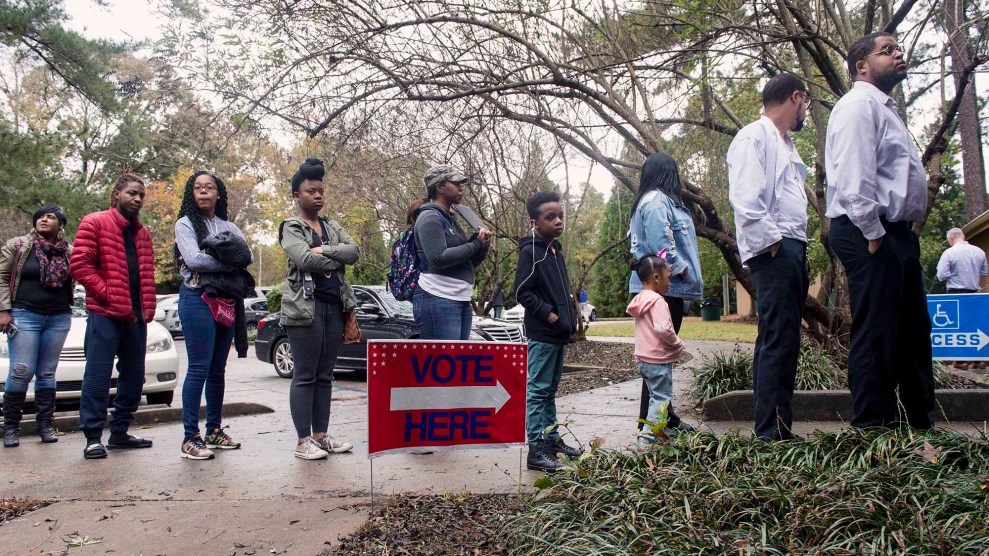 People line up to vote on Election Day in Fairburn, Georgia, near Atlanta.Brian Cahn/ZUMA

Long lines at polling locations in Georgia reveal a voting system that is not performing properly and may disenfranchise voters who cannot wait for hours to cast a ballot. Initial reporting on Election Day shows that precincts with particularly long lines are in African American neighborhoods.

Georgia’s elections have been in the national spotlight for more than a month now, as voter registrations and absentee ballots have been rejected due to policies overseen by Secretary of State Brian Kemp, the Republican candidate for governor. Kemp’s dual role as candidate and top election official has raised doubts that Kemp can impartially oversee the state’s election while also campaigning in a race where his election will depend on high Republican turnout and lower turnout from voters of color. Rep. Hank Johnson (D-Ga.) told Think Progress that the long lines in precincts in Snellville, Georgia, an Atlanta suburb, are Kemp’s “last grasp” to suppress the vote. Even if they don’t represent an intentional suppression effort, long lines and glitches don’t speak well of Kemp’s management of the election process.

Johnson made his comments outside Anniston Elementary School, a Snellville polling location in  Gwinnett County where voters waited in line Tuesday morning for 4.5 hours while election officials worked to replace malfunctioning electronic voting equipment. A line filled with African American voters snaked around the elementary school. Some voters couldn’t wait for hours and left the line.

The state Democratic Party held a press conference at the school around noon, urging voters who left to return and promising that all votes will be counted. The long lines of people who didn’t give up show that “folks have been committed to their right to vote,” Jason Carter, a former Democratic candidate for governor in Georgia, said at the press conference. Johnson, who also spoke at the press conference, noted the voting issues arising in minority-heavy precincts. “It’s ironic that in certain areas of town we see problems with the opportunity for people to vote insofar as the voting equipment is concerned,” he said.

Around noon, the local NBC News affiliate reported that issues at a different location in Snellsville were caused by election officials failing to plug the machines into a power source.

NBC News has confirmed that the issue at Anderson Livsey Elementary in Snellville, GA was indeed a lack of power cords. Gwinnett County Director of Communications Joe Sorenson tells @NBCNews “the machine was not supplied power and was running on battery & the battery ran out” 🤔 https://t.co/YFa45nihXs

Ready to wait? Hundreds of voters stand in line for hours this morning at this SW Atlanta polling place. Only three voting machines! What’s going on here? Live report at noon. pic.twitter.com/lewTPUZnf1

Fulton County Elections Director Rick Barron called the issue at that polling location an administrative “mix-up” and said five more machines were on the way.

While long lines are a sign of poor election administration, some Democrats are taking heart that they also suggest high turnout. “The long lines are indicative of how fed up GA-06 voters are with failed leadership,” says Jake Orvis, communications director for the congressional campaign of Democrat Lucy McBath, who is challenging an incumbent Republican in a district north of Atlanta.

Jamilah King contributed to this report.