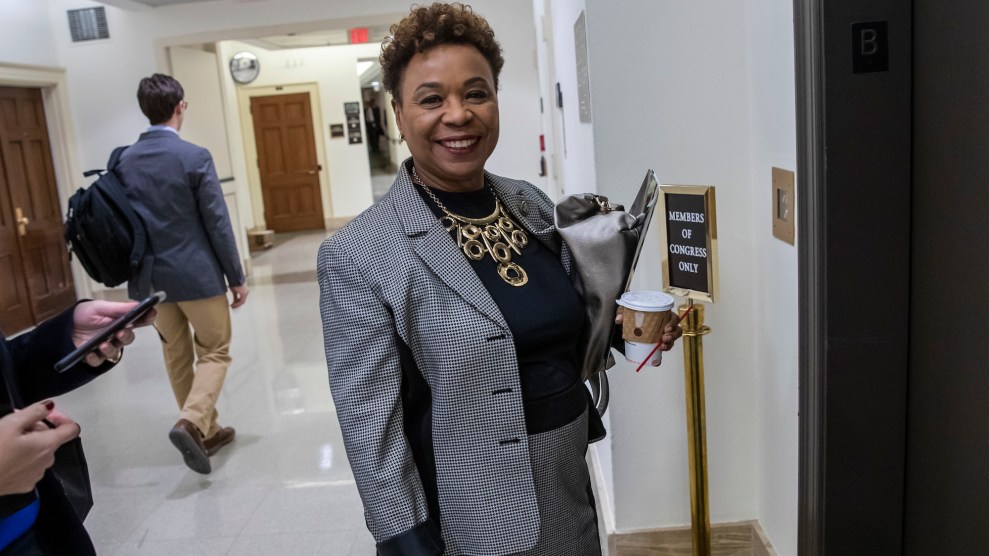 Rep. Barbara Lee heads to a forum for freshmen Democrats at the Capitol in Washington on Tuesday, Nov. 27, 2018.J. Scott Applewhite/AP

The Congressional Progressive Caucus lobbied hard for Rep. Barbara Lee (Calif.) to serve as Democratic Caucus Chair and become the first black woman to serve in House leadership. But in a vote late Wednesday morning, Rep. Hakeem Jefferies (N.Y.) defeated Lee with only ten votes. Her loss was a disappointment for progressives who had hoped the 10-term incumbent would make history with her ascent into a key leadership position.

Lee has been a reliably progressive fixture since she came to Congress nearly 20 years ago, and her commitment to those ideals has been cited by several younger House members as a model for what they hope to achieve as elected officials. The possibility she might become the Caucus chair mobilized a coalition of some of the most prominent progressive organizations, such as Indivisible and MoveOn and Congressional Progressive Caucus leaders Reps. Mark Pocan (Wisc.) and Pramila Jayapal (Wash.). They had been among those meeting with House members to garner support for Lee. Earlier today, Alexandria Ocasio-Cortez, the 29-year-old representative-elect from Queens, posted a passionate Instagram story that described casting a vote for Lee as “a rare and treasured opportunity” that “honors a lifetime of work.”

But 123 House Democrats cast their ballots for Jeffries, a black three-term congressman who represents New York’s 8th district, which covers Brooklyn and Queens. He’s often cited as a rising star in the Democratic Party and several have observed that he’s a strong contender to succeed Pelosi as the House’s Democratic leader when she eventually retires.

A victory for Lee, who also narrowly lost an election for Democratic caucus vice chair in 2016, was allegedly all but a done deal months ago. But a demand for fresh faces in the leadership team—especially faces younger than those of current leaders Nancy Pelosi (Calif.), Steny Hoyer (Md.), and Jim Clyburn (S.C.), who are all nearly 80—was a point of agreement between incoming House Democrats and the incumbent faction opposing Pelosi’s return to the speakership. Jeffries, who is 48, more obviously satisfied that desire than 72-year-old Lee.

“Honestly, the general conversation about new faces was a significant part of it. I did a lot of talking to members, and the feeling in general was that we want new people to have spots.”

“Honestly, the general conversation about new faces was a significant part of it,” Pocan told Mother Jones after the vote. “I did a lot of talking to members, and the feeling in general was that we want new people to have spots.” He mentioned Beto O’Rourke, the 46-year old Texas congressman who left the House to unsuccessfully challenge Sen. Ted Cruz (R-Texas) as an example of someone who sought higher office in the face of few opportunities for advancement in the House.

Speaking with a group of reporters after the vote on Wednesday morning, Jayapal disagreed with that line of reasoning. “I take some issue with generational change being just about age,” she said. “I think it should be about ideas that resonate with young people across the country, and I think Barbara Lee is that person.”

A win for Lee would also have been signal to the women, Jayapal noted, especially women of color who had been both successful Democratic candidates and key constituencies for Democrats this last cycle. “I think [Lee] faced a lot of what we women of color face, which is everybody’s about the idea of women of color, but then when it actually comes to electing one, then you find that there’s a big change,” she said. “I think that we changed that across the country, but I think we got some work to do to change it here.”

That is not to suggest that Jefferies, who is also a member of the Congressional Progressive Caucus, is a poor substitute, a point both Jayapal and Pocan emphasized in their conversations with me. “The good news is both are CPC members,” Pocan tells me. “The difference that a lot of us look at is that Barbara has been a stalwart in the progressive movement.” He adds that the CPC has other opportunities for its members to find its way into leadership. Katherine Clark (Mass.) is running to serve as Assistant Democratic Caucus Chair, and David Cicilline (R.I.) is running for Democratic Policy and Communications chair, a newly created leadership position that will shape the House Democrats messaging.

But Lee’s loss puts a bit more of the onus on the CPC to educate House leadership on the ambitious slate of initiatives they’re planning for the next Congress, and the means by which they’ll achieve them—which relies heavily on grassroots infrastructure progressive organizations built over the course of the 2018 cycle. “I think it would have been easier with Barbara because Barbara really gets inside-outside strategy,” Jayapal tells me. “I think we have to work to make sure that Hakeem also understands the power of inside-outside organizing and develops that kind of trust with the progressive groups across the country.”

The next challenge facing the CPC is to place new and incumbent members onto key committees like Ways and Means and Appropriations. The move had been a key commitment CPC leaders received from Pelosi before declaring their support of her speakership: CPC members, who now account for 40 percent of all House Democrats, were granted proportionate representation on influential committees.