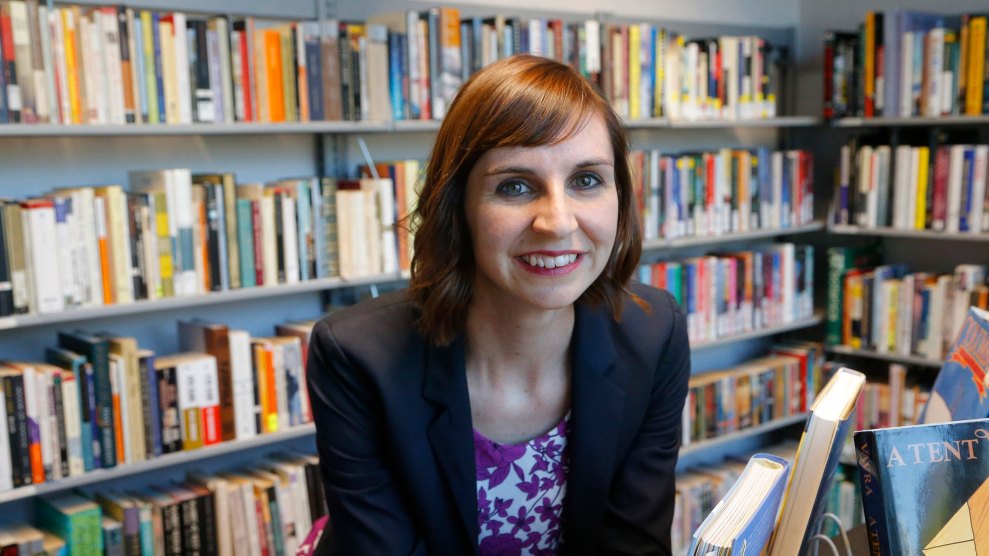 While eyes across the country were stuck on the battle between Reps. Kyrsten Sinema and Martha McSally to be Arizona’s next senator, which ended with Sinema’s win last night, another key race in the state was called Monday: Democrat and public school educator Kathy Hoffman will be the next superintendent for public instruction, proving the lasting power of the teacher movement that rocked the state earlier this year. A first-time candidate, Hoffman beat a charter school executive and former California congressman, Republican Frank Riggs, according to the Associated Press. She will be the first Democrat to serve as Arizona’s top superintendent in more than two decades.

Arizona was one of several states this year that was embroiled in protests from teachers and public education supporters demanding higher pay and more school funding. Following that unrest, teachers unions lauded an unprecedented number of current and former educators running for state office across the country. More than 1,000 current and former educators won state offices Tuesday and the group will now hold about 15 percent of the state legislative seats in the US, according to the National Education Association.

While the long shot candidate for Arizona governor, #RedforEd ally and Arizona State University professor David Garcia, fell short to incumbent Gov. Doug Ducey, Hoffman’s victory gives educators a friend in Phoenix. And the teacher’s movement notched another victory when Arizona voters resoundingly approved stopping the expansion of the state’s voucher-style education savings account program—a move Hoffman and Riggs actually agreed on. More victories for teacher candidates could also still come: As of Monday night, Democrat Jennifer Pawlik, who taught in elementary school for 17 years, narrowly led incumbent Republican state Rep. Jeff Weninger, while Christine Marsh, a Democrat who is a former Arizona teacher of the year and who I profiled for Mother Jones, is still close behind Republican incumbent Kate Brophy McGee, with more than 140,000 ballots left to be counted in Maricopa County.

Hoffman’s candidacy was a direct rebuke of the tenure of the current superintendent Diane Douglas. Douglas threatened to investigate teachers who walked out earlier this year, and she opposed an initiative (that was later pulled from the November ballot) that would have raised taxes on wealthy households to pay for school funding. She also tried to change the state’s academic standards to adopt a curriculum from the Hillsdale College, a private religious school with ties to Education Secretary Betsy DeVos. Doing so would have removed mention of evolution and climate change in the state’s science curriculum. After outcry from teachers, the state’s Board of Education ignored her attempt to overhaul the standards and moved forward with standards that did include mention of evolution. She ended up losing in the primary to Riggs.

Hoffman, who has been a school speech therapist for five years, told Mother Jones she first decided to run after DeVos’ confirmation hearing. She saw parallels between Douglas and DeVos in their lack of classroom experience. “When I watched that, that’s when it dawned on me: There needs to be more educators running for office,” she said in September, ahead of the election. “With no classroom experience, she was unable to answer the most basic questions about education policy.”

Hoffman filed to run for office in February 2017, a year before the #RedforEd movement erupted in Phoenix. Then, when the teacher walkouts happened, she rallied at the state capitol alongside her colleagues, including her former campaign manager and walkout leader Noah Karvelis. She noticed that most people understood that their schools were struggling, but not why. As Hoffman traveled the state over the past year and a half, she saw schools both in poor condition, with decaying roofs and exposed wires, outdated textbooks and a shortage of teachers, while others looked pristine—a sign, she says, that the “education funding system that we have here is inequitable.”

“There’s more of an understanding that it’s because of the legislature and governor’s inaction over the past decade that we had so many people saying it’s time to give teachers a raise and invest in our public schools rather than continuing to make cuts,” Hoffman said. “The Republican-controlled legislature was not willing to listen.”

The race against Riggs was tight and filled with personal jabs. Riggs held a four-point lead over Hoffman in one poll leading up to Election Day, with 17 percent of people undecided. The Republican, who has called himself “one of the fathers of the charter school movement,” served in Congress for three terms from California. Riggs moved to Arizona in 2002 and served as CEO of Charter Schools Development Corporation and then as board president of Arizona Connections Academy, an online charter school.

Much of the sparring centered around the candidates’ experience, or lack thereof. Riggs criticized Hoffman for not having leadership chops. Hoffman questioned in a debate whether Riggs could push for charter school reform when he was “part of the problem,” accusing him of profiting off charter schools. Riggs meanwhile questioned the #RedforEd demonstrations, as a “very, very partisan political effort.”

“The #RedforEd movement started in the same way my campaign started: It was people waking up and realizing that our elected officials were not fighting for improved funding or public schools,” Hoffman told Mother Jones. “It was not a priority for them. The only way to affect change was to speak up and do something about it.”

Now, with her win over Riggs, Hoffman plans to act as an advocate for public schools, lobbying lawmakers for more school funding and ways to address the state’s teachers shortage.

“People are recognizing that it’s time to have an educator in that role to have the classroom experience. For too long we have not had that,” Hoffman said. “I strongly believe that educators are the experts of education. We live it. We breathe it.”