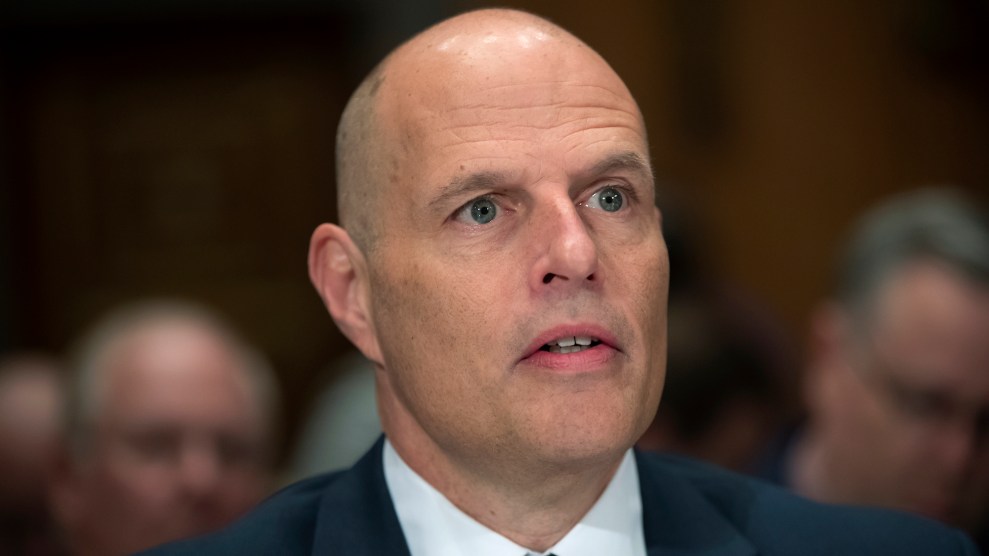 As a top official at US Customs and Border Protection, Ronald Vitiello helped oversee the separation of more than 2,500 immigrant families in the Trump administration’s greatest self-inflicted humanitarian crisis. Five months later, the Senate looks set to confirm Vitiello as the head of Immigration and Customs Enforcement, arguably the most controversial agency in the country. And hardly anyone is paying attention.

At Vitiello’s Senate confirmation hearing on Thursday, there was an unusual absence of protesters, and only seven of the Homeland Security Committee’s 15 members even attended—five Democrats and two Republicans. The previous ICE director, Thomas Homan, was widely vilified by immigrant advocates and Democrats, but Vitiello, who is already ICE’s acting director, has flown under the radar, despite his involvement in some of the administration’s most controversial actions.

Like Homan, Vitiello rose to the top of immigration enforcement after starting out as a Border Patrol agent in the 1980s. Both successfully served under the Obama administration, but their public personas quickly diverged under President Donald Trump. Homan set the tone for his tenure as acting ICE director by telling undocumented immigrants, “You should look over your shoulder, and you need to be worried.” Trump picked him to be ICE’s permanent leader, but he never received a confirmation hearing. Vitiello replaced him in June after serving as CBP’s acting deputy commissioner and the head of Border Patrol, a CBP agency.

Vitiello toes the Trump-Homan line on immigration enforcement without making the same kinds of inflammatory remarks. The strategy appears to be paying off. Gil Kerlikowske, the head of CBP under President Barack Obama, submitted a letter supporting Vitiello’s nomination. Kerlikowske called Vitiello “an extremely effective, honest, and dedicated public servant” and praised him for leading efforts to reduce use of force by Border Patrol agents.

At Thursday’s hearing, Vitiello said he was caught offguard by the outrage generated by the family separation policy. “Luckily,” he said, Trump stopped the separations. But Vitiello confirmed that the administration is now mulling another family separation policy, one that would force parents to choose between sending their kids to shelters and being detained together indefinitely. That “binary choice” would allow the government to get around a court agreement that generally blocks migrant children from being detained for more than about 20 days.

Immigrants advocates are urging senators to oppose Vitiello’s nomination. Michelle Brané, the director of migrant rights and justice at the Women’s Refugee Commission, tweeted, “This is the guy who managed CBP, the agents that separated kids from their parents, the agents who told parents they were taking their child to give them a bath, the agents who did not keep track of who they were separating.” She added, “Not qualified to run anything.”

The most pointed questions at the hearing focused on Vitiello’s 2015 response to a tweet suggesting that Democrats rename their party and asking for possible names. “The liberalcratic party or the NeoKlanist Party,” Vitiello wrote. Vitiello told Sen. Gary Peters (D-Mich.) that he “deeply” regretted the tweet and that he had intended to send it as a private message.

Vitiello was not asked about many of CBP’s well-documented failings during the family separation crisis. In September, the Department of Homeland Security’s inspector general found that CBP’s policy of making asylum-seekers wait at official ports of entry likely led families to cross the border illegally instead—potentially causing families to be separated after parents were prosecuted. CBP tried to keep track of the parents and kids it was separating, but it did not initially realize that the information wasn’t showing up in ICE’s database. That led ICE to unknowingly deport parents without their children. The report also found that nearly one-third of separated children were held at short-term CBP processing facilities for longer than US law usually allows.

Vitiello seemed surprised by how many families ended up being separated under the administration’s zero-tolerance initiative, which Trump abandoned in June. In some cases, CBP officers’ laziness may have prevented families from being reunited. In McAllen, Texas, “CBP officials later arranged to have adults transferred directly from court to ICE custody, rather than readmitting them where they might be reunited with their children,” the inspector general’s report found. “According to a senior official who was involved with this decision, CBP made this change in order to avoid doing the additional paperwork required to readmit the adults.”

Sen. Tom Carper (D-Del.) asked Vitiello at the end of the hearing what he would do to avoid repeating the mistakes of the family separation crisis. His response was vague. He said immigration officials should have “leaned forward more” to explain the process and been ready for the “public outcry.” He did not offer specifics or apologize.

The Homeland Security Committee has not yet voted on Vitiello’s confirmation. If he’s approved by the panel, his nomination will go to the full Senate for confirmation.