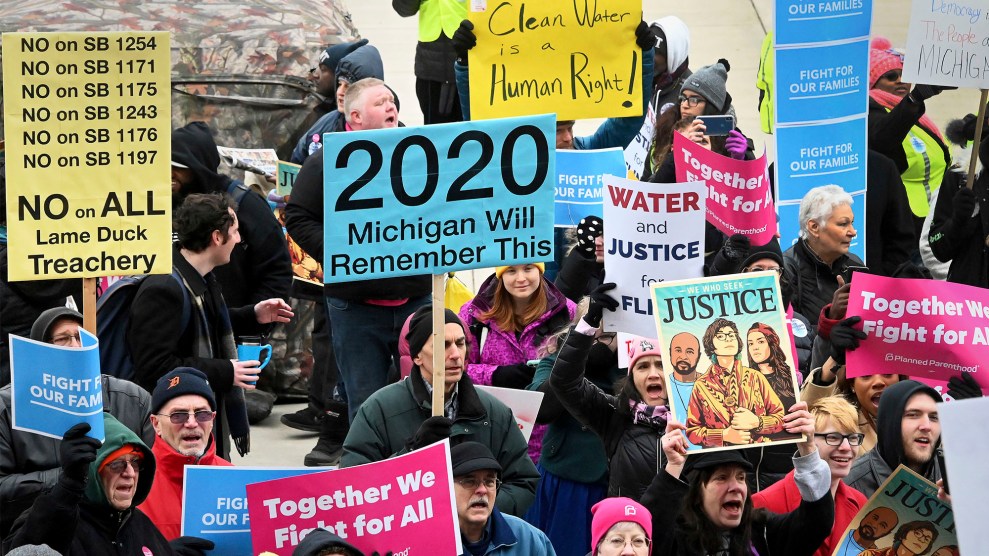 Last month, voters in Michigan overwhelmingly approved ballot initiatives to enact automatic and Election Day registration, create an independent redistricting commission to prevent gerrymandering, and legalize recreational marijuana. It was a huge victory for progressive policies in a key swing state that narrowly voted for Donald Trump in 2016.

One month later, the Republican-led state House of Representatives responded by passing a bill that would make it far more difficult for state residents to get initiatives onto the ballot in the future.

Michigan isn’t alone in this. Voters in 19 states—including red and purple ones—passed progressive ballot initiatives this year. Florida restored voting rights to as many as 1.4 million ex-felons; Maryland and Nevada joined Michigan in making it easier to register to vote; and Colorado, Missouri, Ohio, and Utah also voted to curb gerrymandering. Idaho, Nebraska, and Utah voted to expand Medicaid; Arkansas and Missouri raised the minimum wage; and Missouri and Utah legalized medical marijuana. The success of progressive ballot initiatives across the country, especially in red states, was one of the most consequential under-the-radar stories of the 2018 elections.

Despite rampant voter suppression, 2018 could be huge year for expanding voting rights. Ballot initiatives in 7 states would make it easier for millions to vote & crack down on gerrymandering. My new video for @motherjones pic.twitter.com/fwtdrhz9Wk

But this success has sparked a backlash from state legislatures controlled by Republicans, who have introduced bills in lame-duck sessions that would strike back at these initiatives by making them less likely in future elections.

The measure passed by Michigan’s House, which is now under consideration in the state Senate, would require that no more than 15 percent of the signatures for a ballot initiative come from any one congressional district. Currently, there is no stipulation about where signatures can be gathered in the state, but the new law would force initiative campaigns to collect a far lower share of signatures in high-population (and progressive-leaning) areas like Detroit, Ann Arbor, and Lansing. Instead, they would have to invest many more resources in sprawling, sparsely populated, rural congressional districts. The new legislation “would make it exceedingly more difficult to do constitutional ballot initiatives,” says Sharon Dolente, a voting rights attorney with the American Civil Liberties Union of Michigan, who calls it “a big middle finger to the citizens.”

Even some Republicans are speaking out against the proposal. “It saddens me that my own political party is advocating for it,” state Rep. Martin Howrylak, a Republican from suburban Detroit, told the Detroit News. “When we say reforms, we really mean obstacles to the general public.” Michigan Republicans are trying to pass the bill in a lame-duck session before Democratic Gov. Gretchen Whitmer takes office in January. Bill Rustem, who served as strategy director for Michigan’s Republican governor, Rick Snyder, from 2010 to 2014, has called on Snyder to veto the bill, saying it “would make it much more difficult for the citizens of Michigan to have a direct say in their own governance.” The Senate Elections Committee passed the bill on a party-line vote Wednesday, sending it to the full Senate.

Ohio Republicans brought up similar legislation during the lame-duck session. In May, Ohio voters overwhelmingly approved a constitutional amendment that will make it more difficult for legislators to gerrymander congressional districts during the next redistricting cycle. Ohio, like Michigan, is one of the most heavily gerrymandered Republican states in the country.

Sharon Dolente of the ACLU of Michigan calls the state’s anti-ballot-initiative measure a “a big middle finger to the citizens.”

In response, the Republican-controlled Legislature introduced a bill that would require 60 percent support from voters to change the state’s constitution, rather than a simple majority. It also states that signatures gathered for a citizen-led initiative are valid for only 180 days—previously, they didn’t expire—and must be submitted by the beginning of April before a November election, instead of July. That would force signature drives to take place during the frigid winter months in Ohio, when it’s toughest for groups to organize. The proposed changes “would make it nearly impossible for grassroots activists to amend the constitution at the ballot,” tweeted Mike Brickner, Ohio state director for All Voting Is Local, a voting rights group. The legislation failed to pass in the lame-duck session but is expected to be taken up by the Legislature again next year.

The bills in Michigan and Ohio follow a broader trend of state legislatures trying to nullify the will of the people. In 2017 and 2018, more than 100 bills were introduced in 24 states to reverse ballot initiatives, and 10 states adopted legislation to make it more difficult to put citizen-led measures on the ballot, according to the Ballot Initiative Strategy Center, which advocates progressive ballot measures. “We have been very successful in passing progressive ballot initiatives, and now there’s a trend of politicians trying to take power out of peoples’ hands,” says Chris Melody Fields Figueredo, the group’s director.

In addition to trying to prevent future ballot initiatives, Republican state legislatures are also working to undermine ones that have already passed or are likely to pass soon.

In Michigan, voters gathered enough signatures for ballot measures in 2018 to raise the minimum wage and require employers to provide paid sick leave. But instead of placing the measures on the ballot, the Michigan Legislature passed them into law before the election so they could later be amended with a simple majority in the Legislature instead of the three-fourths majority needed to amend a ballot initiative. Then, after the election, the Legislature gutted the laws in the lame-duck session, and Snyder signed the bills a month before leaving office. (This is a bipartisan problem: Under pressure from the restaurant industry, the liberal city council in Washington, DC, voted in October to repeal an initiative raising the minimum wage for tipped workers.)

A similar power play is underway in Florida, where 64 percent of voters approved a constitutional amendment to restore voting rights to ex-felons. It goes into effect in early January, but the state’s incoming Republican governor, Ron DeSantis, says ex-felons should not be able to register to vote until the Legislature passes a bill implementing the law. Voting rights groups say it’s unnecessary and unconstitutional for the Legislature to intervene. The Florida Legislature has a long history of thwarting ballot initiatives it disagrees with.

“There is no doubt that these attacks are part of a coordinated effort,” the Ballot Initiative Strategy Center wrote in a post-election memo. The conservative American Legislative Exchange Council, which is funded by large corporations and writes model legislation for state legislatures, has circulated a bill to overturn “living wage” initiatives. And the Republican State Leadership Committee, which works to elect GOP state legislators, has raised huge sums from tobacco companies, the Chamber of Commerce, and the National Rifle Association to defeat progressive ballot initiatives. “Ballot initiatives will not be the left’s mechanism for gaining power and advancing their agenda,” the group wrote in a fundraising memo in 2015.

Ballot initiatives are often described as the purest form of democracy, but some Republicans have been unable to hide their disgust with the process. In 2016, 59 percent of Mainers voted to expand Medicaid, but Republican Gov. Paul LePage said he’d rather go to jail than implement the law. “Referendums is pure democracy, and it has not worked for 15,000 years,” he said in his final State of the State speech.