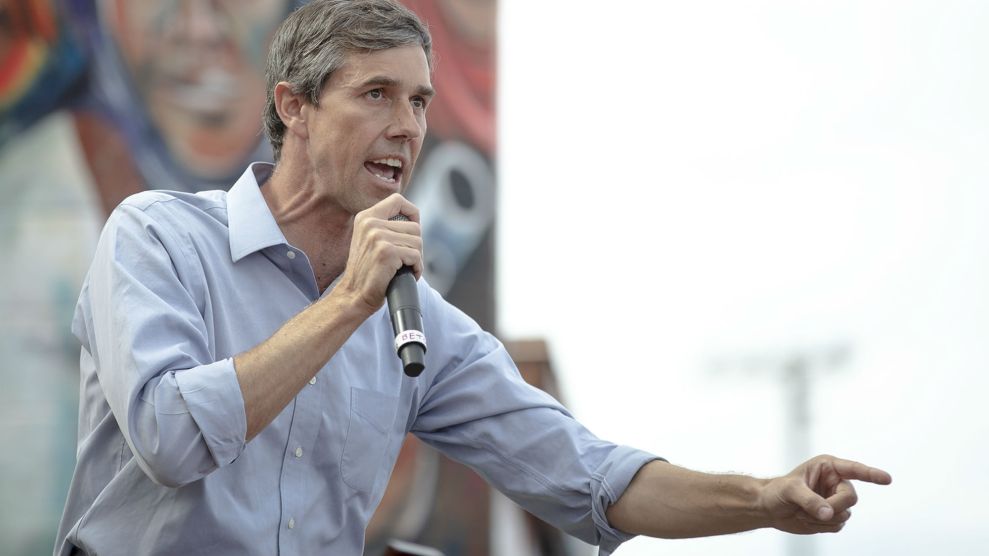 Rep. Beto O’Rourke (D-Texas) on Saturday urged Americans to pressure the Trump administration to close a child migrant camp run by the Department of Health and Human Services in Tornillo, Texas. More than 2,500 children, most of whom arrived unaccompanied at the border, are currently being kept there—due largely to a controversial Trump administration policy change that has made it more difficult to release the minors to adult sponsors.

There are 1,300 kids ready to leave to live with sponsors who have already been identified. But these children remain at Tornillo each day because this administration has deliberately prolonged the process of releasing them.

O’Rourke called for the type of widespread activism that earlier this year helped force the administration to end its policy of separating migrant families who enter the country illegally. “The public pressure that you brought to bear after Father’s Day that ended the practice of family separation—we need that same pressure again, brought to bear on this administration, to close Tornillo,” O’Rourke said.

An update on Tornillo after this morning's tour: 2,700 kids are now being kept inside the camp that was originally opened for 360. Some have been there since summer. pic.twitter.com/B9AH7HeuMv

The Tornillo camp opened in June amid the Trump administration’s family separation crisis. It was originally supposed to hold only a few hundred minors, but it later expanded. Last month, an HHS inspector general report found that BCFS Health and Human Services, a nonprofit that runs Tornillo, wasn’t conducting required background checks on employees and called the level of mental health care for the children at the camp “especially worrisome.”

Merkley also criticized the facility on Twitter, calling it a “child prison camp.” He claimed officials refused to let the members of Congress speak to the children. (O’Rourke, however, said he was able to speak to some children at the facility. HHS did not immediately respond to a request for comment about Merkley’s tweet.) “The vast majority of these children have parents or other family members who are ready to sponsor them in the US,” Merkley continued, “but the Trump Administration has deliberately created a bottleneck so that it’s difficult for the children to be released.”

I just left the tent city at Tornillo. It is a child prison camp. They refused our request to speak with the children who are held there.