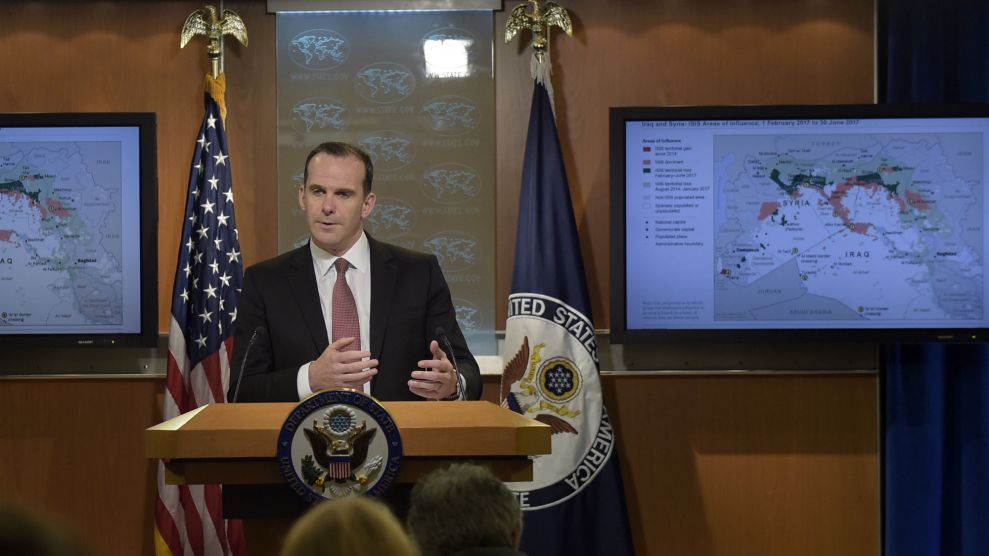 The lead US envoy in the fight against ISIS resigned abruptly Friday due to his disagreement with President Donald Trump’s decision to withdraw 2,000 troops from Syria.

Brett McGurk, special presidential envoy for the State Department’s Global Coalition to Defeat ISIS, was in the region last week meeting with US allies on Wednesday when Trump announced, in a video on Twitter, that he had decided to end the US mission against the Islamic State in Syria because “We have won against ISIS. We’ve beaten them, and we’ve beaten them badly.”

Trump made the surprise announcement without consulting US allies and against the advice of his national security advisers. It shocked the international community, and heightened worries that the American withdrawal would leave US allies abandoned and weakened, heighten instability in the region, and embolden ISIS, which, while diminished, still has power.

McGurk wrote an email to his colleagues explaining his decision to step down. “The recent decision by the president came as a shock and was a complete reversal of policy that was articulated to us,” he said. “It left our coalition partners confused and our fighting partners bewildered.”

“I worked this week to help manage some of the fallout but—as many of you heard in my meetings and phone calls—I ultimately concluded that I could not carry out these new instructions and maintain my integrity.”

I want troops home too, but leaving Syria abruptly is betrayal to Kurds who have sacrificed and shed blood for Americans and it leaves Syrian Christians as sitting ducks. Please @realDonaldTrump re-think this! Your friends and supporters hope you reconsider.

McGurk has led the effort to curb ISIS’s influence in the Middle East since 2015, when he was appointed to his current post by former President Barack Obama. Before that, he held a series of high-level State Department jobs during both the Obama and Bush administrations. He had already planned to leave his post in February 2019. But on Friday, he submitted his resignation to Secretary of State Mike Pompeo, effective December 31, citing his disagreement with Trump’s Syria withdrawal.

Earlier this month, McGurk assured reporters at a State Department briefing that ISIS’s presence in Syria had been significantly diminished, and that the United States and its allies had succeeded in driving ISIS out of its main strongholds. But their work in the region, he said, had to continue to ensure longevity.

“I think it’s fair to say Americans will remain on the ground after the physical defeat of the caliphate, until we have the pieces in place to ensure that that defeat is enduring,” McGurk said on December 11. “Nobody is declaring a mission accomplished. Defeating a physical caliphate is one phase of a much longer-term campaign.”

He added: “It would be reckless if we were just to say, well, the physical caliphate is defeated, so we can just leave now. I think anyone who’s looked at a conflict like this would agree with that.”

But Saturday morning, as the government began its first full day of a partial shutdown, Trump took to Twitter to continue defending his Syria withdrawal.

I am in the White House, working hard. News reports concerning the Shutdown and Syria are mostly FAKE. We are negotiating with the Democrats on desperately needed Border Security (Gangs, Drugs, Human Trafficking & more) but it could be a long stay. On Syria, we were originally…

….going to be there for three months, and that was seven years ago – we never left. When I became President, ISIS was going wild. Now ISIS is largely defeated and other local countries, including Turkey, should be able to easily take care of whatever remains. We’re coming home!