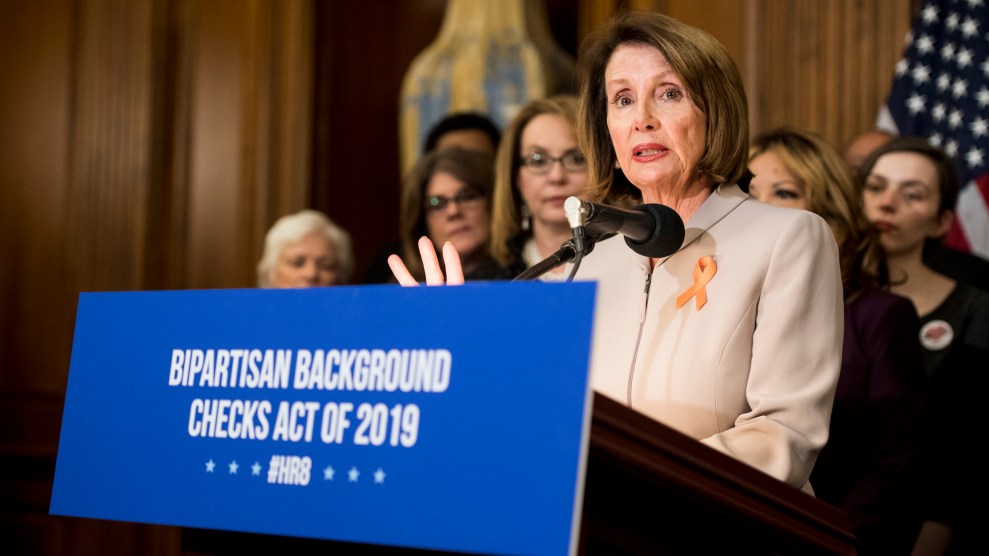 House Speaker Nancy Pelosi delivers remarks during the event to introduce the Bipartisan Background Checks Act of 2019 in the Capitol on January 8.Bill Clark/CQ Roll Call/AP

Gun reform advocates took a victory lap in the House of Representatives on Tuesday afternoon when Rep. Mike Thompson (D-Calif.), the chairman of the House Democrats’ Gun Violence Prevention Task Force, introduced legislation that would require background checks for every gun sale in the country. This wasn’t the first time a Democrat has put forward this type of bill, but it is the first time the measure has been welcomed as a chief legislative priority in a Democrat-held chamber of Congress. After a midterm election in which candidates across the country campaigned and won on strengthening gun control, Democrats are confident they can push more aggressive gun legislation than they have in the past. Tuesday’s rollout marked a distinct shift, with House Speaker Nancy Pelosi joined by former Rep. Gabby Giffords at the bill’s announcement to signal that gun reform will be a key priority Democrats push for this year.

And, for the first time, Republican lawmakers endorsed a measure for universal background checks. Democrats were so eager to highlight the fact that five Republican members co-sponsored the bill, they decided to nickname it the “Bipartisan Background Checks Act of 2019”—and Thompson says it’s a key achievement. “The important thing about this bill is that it’s bipartisan, and that it recognizes and respects the constitutional rights that gun owners have,” Thompson tells Mother Jones. “I think that’s important to the credibility of our effort.”

But while the midterms may have given Democrats newfound confidence to pursue their ideal gun control legislation, the elections actually left them with fewer allies across the aisle. The majority of Republicans who had previously backed gun safety measures either retired or lost their 2018 reelections. Of the 14 GOP lawmakers who had previously co-sponsored expanded—but not universal—background check bills, nine retired, resigned, or lost their seats to Democrats last year. Since the bill’s introduction on Tuesday, it has attracted 145 additional Democratic co-sponsors, but no more GOP lawmakers have added their names.

Democrats have repeatedly introduced universal background check bills in both chambers of Congress since the 2012 Sandy Hook Elementary School massacre first reignited calls for stricter federal gun laws, but they’ve never garnered Republican support. Thompson had introduced a more limited measure in the past, only expanding background checks in some circumstances, which had won over those 14 Republicans. But his new bill would close all loopholes that currently allow private firearms transfers, such as those that occur at gun shows, to transpire without a background check.

Gun violence prevention activists lauded that shift. “This bill is further proof that gun safety is no longer the third rail of American politics,” John Feinblatt, the president of Everytown for Gun Safety, said in a statement.

There are signs that is indeed the case. Demands for universal background checks gained renewed urgency in the wake of February’s school shooting in Parkland, Florida; a Quinnipiac poll conducted a week after the Parkland massacre found that a record 97 percent of Americans supported the policy. During the midterm elections, it became a key plank of the Democratic platform, and some polling has suggested that position helped return the House to Democratic control.

But these political shifts don’t seem to have measurably changed Republican minds, even though language in the legislation—such as assurances that background checks won’t lead to the creation of a national firearm registry—had been included specifically to assuage the concerns gun rights proponents raise. The five co-sponsors who signed onto the bill—Reps. Peter King (N.Y.), Brian Fitzpatrick (Penn.), Fred Upton (Mich.), Brian Mast (Fla.), and Chris Smith (N.J.)—have been some of the few reliable GOP allies of the gun reform movement. Each of them had voiced support for universal background checks and received the few endorsements that national gun reform organizations gave to Republican candidates during the 2018 midterms. They all had also been co-sponsors on Thompson’s last background check bill. And according to Thompson, they were the only ones who were willing to raise their hands as original co-sponsors for his legislation.

If anything, the midterms left gun reform advocates with fewer Republican allies in Congress, as Democrats swept out the Republicans in swing districts who were favorable to gun safety. “Some of those people chose not to run, some lost their races,” Thompson explains. “Some of those [were] people who lost because their party didn’t put forward gun violence protection that constituents were looking for.”

But advocates don’t equate a hesitancy to co-sponsor with an unwillingness to eventually vote for the measure. Charlie Mirsky, one of the March for Our Lives student activists who spent the summer drumming up bipartisan support for the measure, says conversations he’s had with GOP lawmakers suggest they’re still feeling out the new political dynamics as many of them face a vote on background checks for the first time.

“I think a lot of Republicans are scared,” Mirsky says. “This is the first time that this kind of legislation will come to the floor. They’re just not used to gun violence prevention being a winning issue, but I think they’re going to realize that it is.”

Democrats are aiming to get the bill through the House in the first 100 days of the new Congress, and can do so without Republican support. Senate Majority Leader Mitch McConnell is unlikely to bring the measure up for a vote in the Senate.