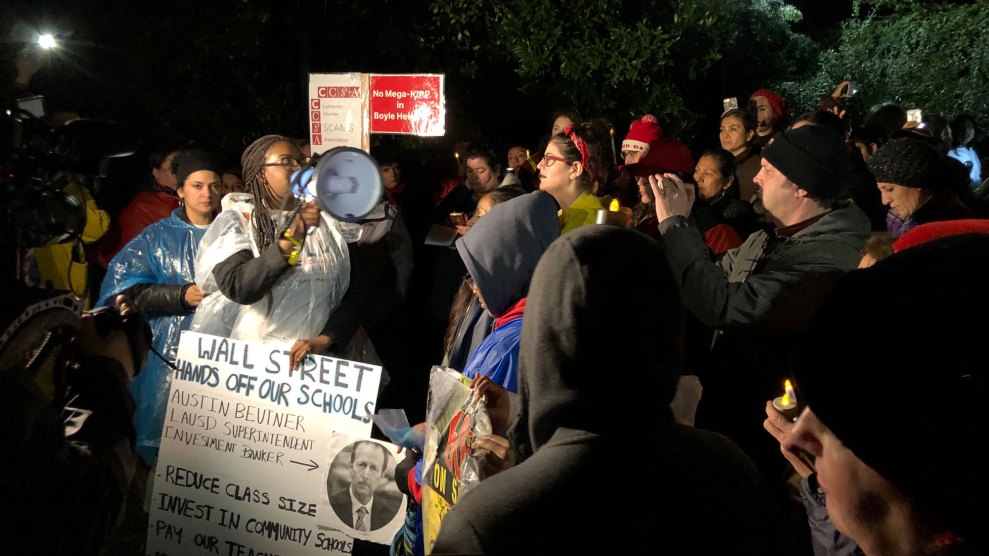 On a quiet, tree-lined street in the hills in Pacific Palisades, California, 18 miles from downtown Los Angeles, a coalition of frustrated students, parents, and teachers chanted and jeered Thursday night outside the front gate of the man who, for the last four days, has been the focus of ire for teachers on strike across Los Angeles: District Superintendent Austin Beutner.

“Billionaires can’t teach our kids,” the crowd shouted. They had just returned from the large, white-paneled house of William Siart, a former banking executive who founded Excellent Education Development, an organization that helps manage charter schools. A day earlier, the protesters dropped by school board president Monica Garcia’s house to demand much of the same.

Now, this rambunctious crowd of parents and students, organized under the umbrella group Reclaim Our Schools LA, rattled off a list of demands at Beutner’s house: Reduce class sizes, pay teachers more, cap and regulate charter schools, hire more librarians and counselors for schools, and invest in community schools. “Open the door,” they bellowed, ringing on the bell to his front gate.

“We are tired of the privatization of our public schools. Black and brown students are tired of being disrespected and profited off of.”

For the last four days, teachers have picketed outside schools, as the teachers union on Thursday restarted negotiations with the district. So why all the focus on a former investment banker and former first deputy mayor who now oversees the nation’s second-largest school district? Early in his career, Beutner worked for the private equity firm Blackstone and eventually co-founded the investment bank Evercore Partners.

Without much of a background as an educator, last year Beutner became the city’s sixth superintendent in the past decade, and has reportedly considered a controversial “portfolio” plan to divide the sprawling school district into 32 networks, according to the Los Angeles Times, leaving more autonomy to neighborhoods. United Teachers Los Angeles President Alex Caputo-Pearl pointed out in an LA Times op-ed that the so-called “portfolio” model had been criticized for its “negative effect on student equity and parent inclusion.”

Outside Beutner’s house Thursday night, it was students who mostly aired their frustration with the state of their schools. “We are tired of the privatization of our public schools,” one teenager named Cheyenne, from the grassroots group Students Deserve, told the crowd. “Black and brown students are tired of being disrespected and profited off of.”

“We want Austin Beutner to keep his hands off our schools,” said Marshe Doss, a senior at Susan Miller Dorsey Senior High School in south Los Angeles. “My education is not a business.” Doss was losing her voice, but the crowd yelped as she spoke. She demanded that the district prevent charter schools from moving into vacant spaces at traditional district schools, a widespread practice known as co-locating. Throughout Los Angeles, 102 charter schools share space with traditional public school sites.

“Do not use our money to fund charter schools and then tell us that you don’t have money for us,” Doss said, rousing the crowd. Before the crowd dispersed, they raised plastic candles up in the air and had a moment of silence outside the Beutner house, ending another day without a resolution for their schools.

For the last few days, Neelima Hossain, 14, who attends the New Open World Academy at the Robert F. Kennedy Community Schools, has opted to picket alongside her teachers instead of going to school. She found it important to stay out of school for the sake of her community. “I hope that every single support system that I could meet at my school is available to me and I have access to it,” she says. “That’s what I deserve to make sure that I get what I want in my future. And all of my peers get that, too.”

Hossain, a leader at Students Deserve, says her geometry class has around 40 students while her English class has 39. Hossain adds that her school lacks a full-time nurse. “When there are so many children in the class, the teachers don’t have enough time to make sure everyone understands the material and make sure that everyone is on the same page,” Hossain says.

She hoped that the district would find a way to end random searches at schools and that her community’s schools were fully funded like those in affluent neighborhoods.

“At the end of the day, I’m thinking of this fight in the long term,” she says. “Do I want to miss out on school for one day and have, for years going forward, my education be disadvantaging to me? Or do I want to improve my education and improve my community?”