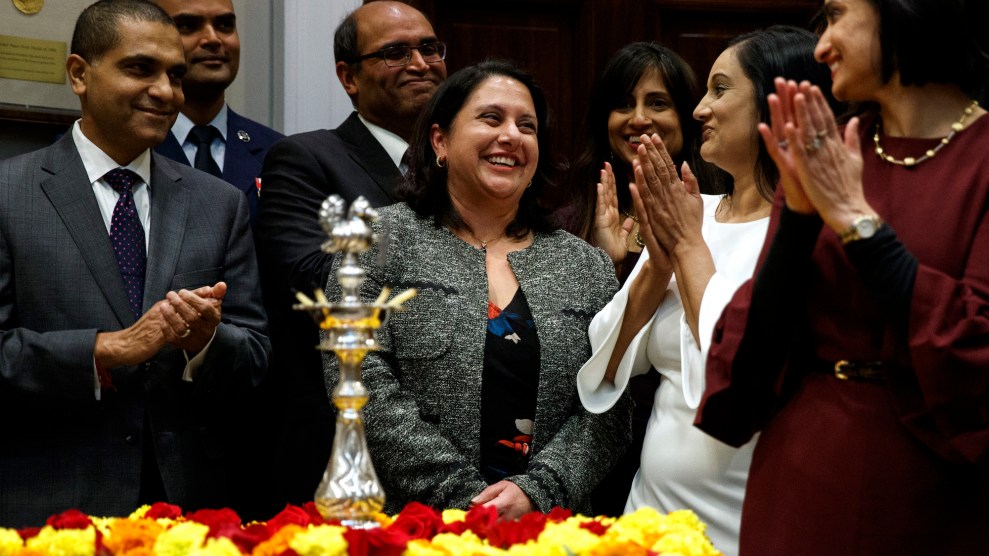 Neomi Rao, administrator of the Office of Information and Regulatory Affairs, smiles as President Donald Trump announces his intention to nominate her to fill Brett Kavanaugh's seat on the DC Circuit Court of Appeals.Evan Vucci/AP

Neomi Rao, whom President Donald Trump nominated to replace Brett Kavanaugh on the federal bench and who’s reportedly on the president’s Supreme Court short list, wrote in the 1990s that victims of date rape were partly responsible if they’d been drinking. In a series of controversial articles for Yale University campus papers, she also suggested that climate change wasn’t real and argued that sexual and racial oppression were “myths.”

The 45-year-old Rao, who currently serves as Trump’s deregulatory czar as administrator of the White House’s Office of Information and Regulatory Affairs (OIRA), started her campus journalism career at the Yale Free Press, a publication that describes itself as “somewhere to the right of Attila the Hun.” It was founded by the son of the late Robert Bork, the judge whose radically conservative views tanked his 1987 Supreme Court nomination. After graduation, she went to work as a reporter for the now-defunct conservative Weekly Standard before heading off to law school.

That body of work shows a young Rao steeped in themes that have continued to characterize her legal work later in life, especially an Ayn Rand-like focus on the individual versus the group. Even as a freshman, Rao railed against feminism, affirmative action, political correctness, multiculturalism, LGBT rights, and environmentalism.

It’s fitting that Trump nominated Rao to fill Kavanaugh’s seat on the powerful DC Circuit Court of Appeals, given that Kavanaugh was just embroiled in historically contentious Supreme Court confirmation hearings for his own behavior at Yale and at other points in his youth.

Rao’s early writings haven’t aged well and are likely to become an issue at her confirmation hearing. The White House was forced to withdraw another one of Trump’s nominees to a federal circuit court, Ryan Bounds, after the emergence of his controversial undergraduate writings at Stanford University, in which he disparaged multiculturalism and race-focused organizations. Bounds’ youthful college work is not so different from Rao’s.

She denounced multiculturalism as a divisive force and wrote a number of articles complaining about the existence of ethnic cultural houses on the Yale campus. In one piece she wrote, headlined “Separate, But More Than Equal,” Rao and a co-author suggested that minority students were getting an unfair advantage by having special deans devoted to helping them. The notion that racism and sexism are no longer big social problems permeated Rao’s writing. In one piece in the Free Press headlined “Submission, Silence, Mediocracy,” she wrote, “Myths of sexual and racial oppression propogate [sic] themselves, create hysteria and finally lead to the formation of some whining new group. One can only hope to scream, ‘Perspective, just a little perspective, dahling!'”

“Myths of sexual and racial oppression propogate [sic] themselves, create hysteria and finally lead to the formation of some whining new group,” Rao wrote.

Rao’s views on affirmative action and multiculturalism don’t seem to have changed much since she was in college. After graduating from the University of Chicago Law School, she clerked for Justice Clarence Thomas, who also has a dim view of affirmative action. In 2009, Rao testified at the confirmation hearing of Supreme Court Justice Sonia Sotomayor and questioned the nominee’s ability to be objective as a judge because of Sotomayor’s suggestion that a “wise Latina” may come to better decisions from the bench than a white man.

As an undergrad, Rao was a champion of individual rights and elitist meritocracy. In a review of William Henry’s In Defense of Elitism, she wrote, “In this age of affirmative action, women’s rights, special rights for the handicapped and welfare for the indigent and lazy, elitism is a forgotten and embarrassing concept. Elitist ideals and social hierarchies are something from an un­enlightened past. In our new feel­-good era, everybody is okay, and political and academic standards can adjust to accommodate anyone.”

In her work at the Free Press and other campus publications, Rao was particularly scornful of feminists, who she often said failed to recognize the biological differences between men and women. In one Free Press article, Rao described feminism as having “contemporary associations with radicalism and lesbianism.”

In 1995, on the 25th anniversary of the first class of women admitted to Yale, Rao wrote a long story suggesting that women had achieved equality with men and therefore didn’t need any special consideration. Differences in things like pay, she wrote, occurred simply because of women’s choices to start families. In another editor’s note, she described Catharine MacKinnon, the famous feminist scholar who helped lay the legal groundwork for courts to treat sexual harassment as a form of discrimination, as a leader “filled with hatred.” Rao compared MacKinnon to Louis Farrakhan, the Nation of Islam leader known for his anti-Semitism, claiming that both were identity group leaders fighting battles that had been won long ago.

These musings on women’s rights were a good predictor of what Rao would go on to do in the Trump administration. One of her first moves as head of OIRA was to suspend the implementation of a regulation created during the Obama administration requiring companies to report pay by race and gender. The regulation, issued by the Equal Employment Opportunity Commission in 2016, was designed to compile data that would allow researchers to get a better handle on the gender pay gap and to combat it more effectively.

For instance, in an April 1993 article, Rao wrote that feminists had torn down traditional structures in the pursuit of gender equality and in the process had “unleashed other forces.” The patriarchal rules the feminists were destroying, Rao wrote, “also provided greater protection from horrors such as rape.”

“A good way to avoid a potential date rape is to stay reasonably sober,” Rao wrote.

A year later, in the Yale Herald, another campus publication, she wrote, “I’ve been to a lot of fraternity parties on this campus. It has always seemed self evident to me that even if I drank a lot, I would still be responsible for my actions. A man who rapes a drunk girl should be prosecuted. At the same time, a good way to avoid a potential date rape is to stay reasonably sober. And if she drinks to the point where she can no longer choose, well, getting to that point was part of her choice.” She concluded, “Implying that a drunk woman has no control of her actions, but that a drunk man does strips women of all moral responsibility.”

Jess Davidson, executive director of End Rape on Campus, called Rao’s writings “disqualifying for a judicial nominee.” She said in a statement, “Her comments condone victim blaming and perpetuate the rape culture in our schools and society that are dangerous to all individuals.”

Environmentalists were also a favorite target of Rao’s writing. In April 1992, when she was a freshman, she wrote that campus environmentalists were not presenting issues in a fact-based manner and frequently left out “free market” solutions to pollution and other environmental problems. “The three major environmental bogeymen, the greenhouse effect, the depleting ozone layer, and the dangers of acid rain,” she wrote, are all theories that “have come under serious scientific attack.” She complained that environmental publications on campus “accept issues such as global warming as truth with no reference to the prevailing scientific doubts.” Such groups, she wrote, “have promoted a dangerous orthodoxy that includes the unquestioning acceptance of controversial theories like the greenhouse effect.”

While her college work may be the musings of a young person, Rao has been remarkably consistent in her political views since her Yale days. Her writings hinted at the lawyer she would become, especially in her current post at OIRA, an office known under Trump as the place where health, safety, and environmental regulations go to die. Rao’s views on the environment and regulation are particularly relevant to the job she’s been nominated for. The DC Circuit Court of Appeals is considered the second-most powerful court in the country, in large part because virtually every environmental, health, and safety regulation that comes out of Washington gets litigated there.

And Rao’s trajectory may not be limited to the DC Circuit. Last week, Politico reported that her name is now being circulated as a possible Trump replacement for Justice Ruth Bader Ginsburg, whose poor health has led the White House to start making plans for another Supreme Court vacancy.

Nan Aron, president of the Alliance for Justice, a liberal advocacy group that has been reviewing Rao’s record, said in an interview that Rao’s college writing remains relevant because Rao has never walked back from any of it, and in fact has highlighted it in public statements. “She is proud of these statements and her role in articulating them at Yale,” she says. “Her views are as relevant today as they were when she was in her 20s.”