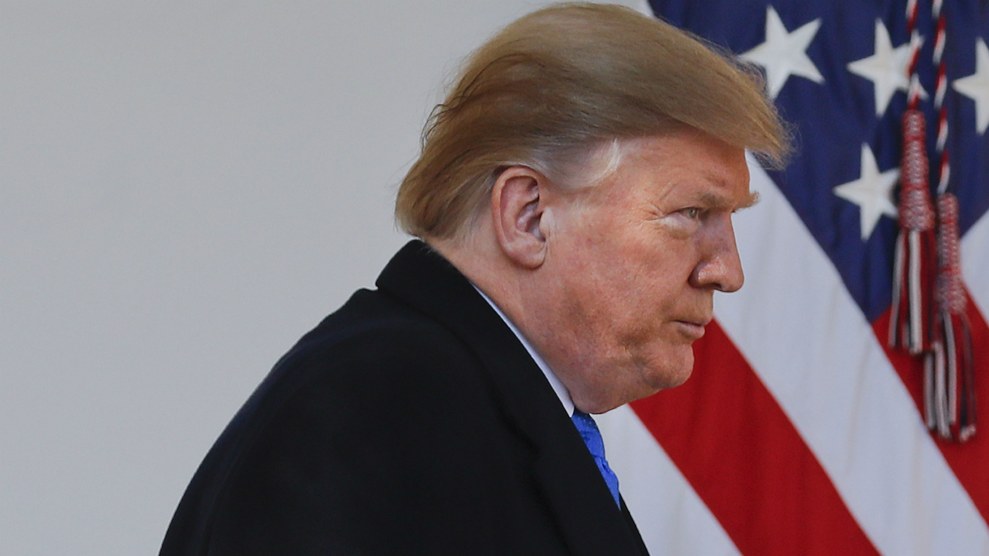 President Donald Trump’s sons announced Thursday that they were shelving plans to open two chains of lower-end hotels and motels, blaming Democrats and journalists on their failure to get the new brands off the ground. But there’s a likelier explanation for their struggles, and it has to do with their dad.

It’s been two and a half years since the Trump sons trademarked the names Scion and American Ideal for the new hotel chains. With Thursday’s announcement, they have nothing to show for the once-ballyhooed expansion of the Trump empire. “We live in a climate where everything will be used against us, whether by the fake news or by Democrats who are only interested in presidential harassment and wasting everyone’s time, barraging us with nonsense letters” Eric Trump said in a bitter statement to the New York Times.

The Trumps had announced only one franchisee, to operate four locations of the new hotels. According to the New York Times, they had perhaps a dozen additional deals that had not been publicized.

Despite Eric Trump’s protests, it seems unlikely that the planned chains were ever going to thrive. One hotel industry expert told Mother Jones that for chains like Scion and American Ideal—which were probably going to rent rooms in the $100 to $150 range, as opposed to $450 and up in Trump’s swankier locations—to be successful, they have to operate at scale. Chains like these create business through dozens or hundreds of locations that use a loyalty points system and central booking. While Trump’s high-end hotels bank on their uniqueness, excellent service, or lavish luxury, the market for the lower-end chains is dominated by brand loyalty.

Rather than “presidential harassment” or “fake news,” there are plenty of business reasons for franchisees to avoid the Trump brands—mainly the association with President Trump. When it comes to brand loyalty, the Trump name was probably a killer for anyone who wanted to open a new hotel.

“He’s the president and he’s very polarizing,” says Jan A. deRoos, a professor of hotel finance and real estate at Cornell University’s School of Hotel Administration. “So if you have a chance to put a brand on your hotel and a good half of the population won’t stay there because they don’t like him, or you could put something benign on it like a Best Western, it’s an incredibly easy decision.”

The new chains were a risky move to begin with. Trump-branded hotels operate under different models—some are owned and run by Trump, while others are licensed by independent owners who pay Trump to use his name—but they all have the Trump brand in common. They also are all defined by the gold-plated faucets and impeccable service that Trump has tried to cultivate as synonymous with his name. Franchising lower-end hotels—more in line with a Comfort Inn than the kind of place that has a sommelier saber champagne bottles in the lobby—under other names would be a radically different approach, and one that might not capitalize on the strengths that the Trump Organization does have.

So what will the Trumps do now? In his statement to the Times, Eric Trump said he doesn’t mind if the Trumps have to “slow down our growth for the time being.” But really what the Trump Organization needs is cash.

Fresh evidence of the Trump Organization’s financial conundrum came last week with news that in the midst of his 2016 presidential campaign, Trump sought out Deutsche Bank for a loan. Trump poured tens of millions of dollars of his own money into his campaign, but at the same time he secretly approached one of the last lenders in the world willing to deal with him, asking for cash to help refurbish his Scottish golf courses. (The Trump Organization has denied it needed a loan to run the course.) He didn’t get the loan, and the courses have continued to bleed money.

According to the New York Times, Deutsche Bank’s CEO in Germany put his foot down about lending any more money to Trump. Trump’s annual personal financial disclosures show that ongoing hotel and golf resort management fees have been steady income for him, but the fireworks on his balance sheets have always been from new hotel deals and the sale of high-end condos or real estate near his golf courses. The last big condo sale was in 2017, when, shortly after the inauguration, Trump sold a $16 million condo to a Chinese American businesswoman with apparent links to Chinese military intelligence. Since then, only a string of smaller properties have sold. Some of his most lavish pieces of real estate have lingered unsold. Cash is not flowing into the company’s coffers as it did before Trump ran for president.

It’s not known if Trump will attempt to self-finance his reelection—self-financing was a key plank of his 2016 campaign—but with a brutally expensive 2020 race looming and with no major real estate sales, no new Deutsche Bank cash, no new big franchise fees from overseas hotels, and now no new smaller franchise fees for downmarket chains, Trump may be beginning to worry about his finances more. As he groused to the New York Times last week, “I lost massive amounts of money doing this job. This is not the money. This is one of the great losers of all time.”