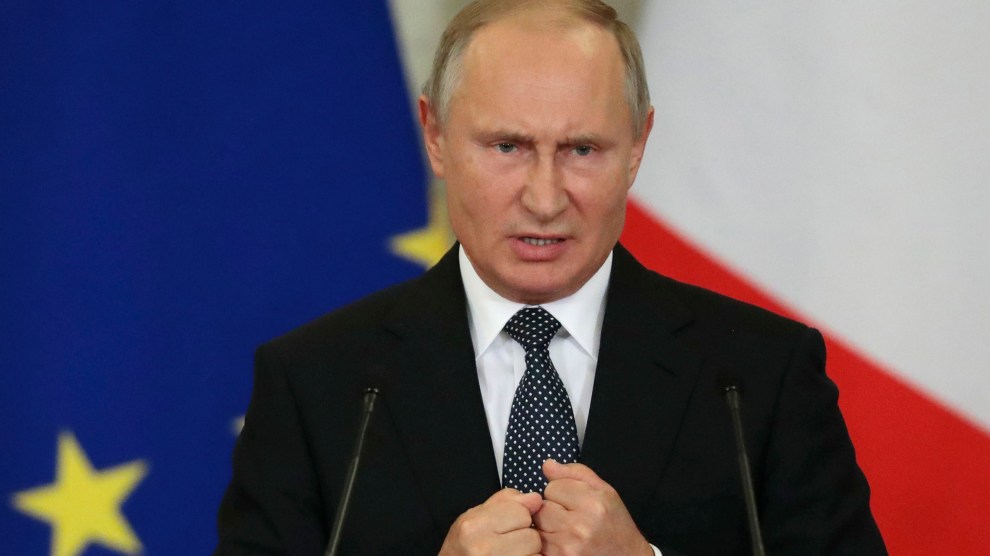 The tale is yet another example of organizations linked to the Kremlin working to advance right-wing politics in the West.

There is no clear indication of whether this money ever actually made its way to Salvini and his party, L’Espresso notes. But the tale is yet another example of people or organizations linked to the Kremlin working to advance right-wing politics in a Western nation. In this particular case, the deal, regardless of whether it ever came to fruition, shares elements with President Donald Trump’s Moscow tower initiative—another business negotiation during an election that was carried out by a right-leaning politician’s trusted aide who had or was seeking discussions with Russian officials.

L’Espresso reports that the deal came to be in October 2018 when Salvini, a self-proclaimed fan of Trump and an admirer of Russian President Vladimir Putin, made an official trip to Moscow, disappearing after a press conference and mysteriously ditching his Italian press pool only to reappear the next morning. During that time, Salvini and Savoini reportedly met with Deputy Premier Dmitry Kozak, Putin associate and delegate for energy affairs. The next day, reporters overheard Savoini take part in a hotel meeting with Russian oil executives working out the details of a deal that would for a year send 250,000 euros monthly to the Lega Nord, disguised as diesel sales from the Kremlin-owned oil company Rosneft to Italian state-owned oil company Eni. Salvini didn’t respond to L’Espresso‘s requests for comment; on Friday, opposition politicians in Italy called on the Lega Nord and Salvini to respond to the magazine’s allegations.

This fall, Trump’s longtime attorney Michael Cohen pled guilty in federal court to lying to Congress about his involvement in the Trump Tower Moscow deal. Cohen revealed over the course of these proceedings that Trump and other aides continued to negotiate the tower deal deep into the 2016 campaign. Cohen admitted to lying about this timeline in 2017, when he told both the House and Senate intelligence committees that negotiations had ended in January 2016. Cohen also admitted to lying about his Kremlin contacts about the project—he had said that his attempt to contact top Putin aide and spokesman Dmitri Peskov about the deal went unanswered. In fact, Cohen did hear back from him after sending an email asking for Peskov’s help securing Kremlin approval for the project. Cohen maintains that the outreach had nothing to do with politics—only business.