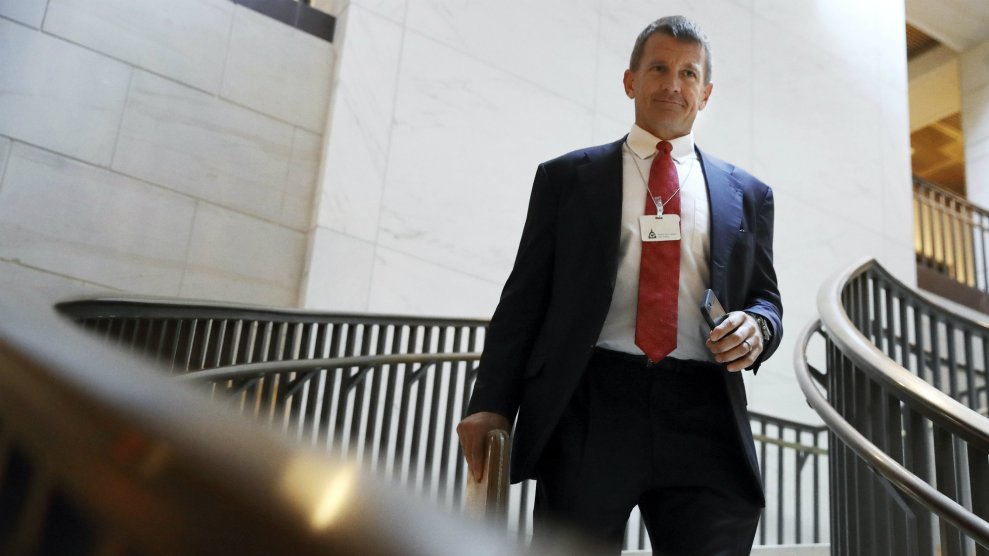 Erik Prince, the former CEO of the controversial security firm Blackwater, has admitted in an Al Jazeera interview to attending an August 2016 campaign meeting at Trump Tower with Donald Trump Jr.

The New York Times had reported last year that Prince arranged and attended a meeting with an adviser to the de facto ruler of the United Arab Emirates, who then told Trump Jr. that the UAE and Saudi Arabia wanted to help Trump win the election. But this is the first time Prince has admitted that he was at the meeting and the discussion was about Iran policy. This revelation is more proof that Prince may have lied to Congress during his testimony to the House Intelligence Committee.

Prince, who is the younger brother of Secretary of Education Betsy Devos, told Congress in November 2017 that he had no formal communication with the Trump campaign beyond “sending papers” on foreign policy to Steve Bannon, who was the campaign chairman. As Mother Jones reported in 2018, Prince had no qualms about releasing the transcript of his testimony to Congress:

Prince, unlike most witnesses who appeared before the House Intelligence Committee, agreed to allow the panel to release his entire testimony. As a result, Mueller’s team can use the transcript as evidence to potentially charge Prince for lying to Congress. Rep. Adam Schiff (D-Calif.), the top Democrat on the panel, told Mother Jones in March that Democrats are also considering sending Mueller criminal referrals urging him to prosecute witnesses who lied to the committee.

In the Al Jazeera interview with Mehdi Hasan, Prince fumbled his answer about why the meeting wasn’t in the official transcript:

When asked by Al Jazeera’s Hasan about why he didn’t then disclose the August 2016 Trump Tower meeting, Prince initially said he “disclosed any meetings, the very, very few” he had.

When pressed further by Hasan, Prince said, “I don’t believe I was asked that question.”

Prince later contradicted himself, saying he did tell the panel about the meeting. When asked to explain why it was not in the transcript, Prince said, “I don’t know if they got the transcript wrong.”

He later also said that “not all of the discussion that day was transcribed”.

He added that he “certainly” remembers discussing the meeting with “investigators”.

A House Intelligence staff member told Al Jazeera that Prince was not asked about the meeting during his testimony.