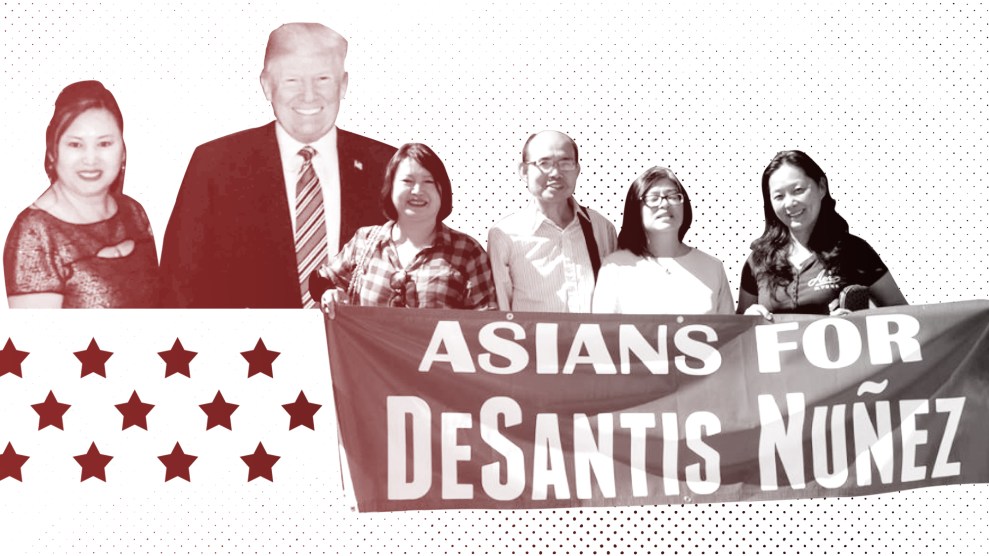 The Florida chapter of the Council for the Promotion of the Peaceful Reunification of China (CPPRC), part of a network of groups linked to China’s Communist Party and seen as vehicles for projecting Chinese influence in the West, abruptly dissolved last week after Mother Jones reported on Cindy Yang’s ties to the organization.

Yang, the Florida message parlor owner who marketed access to President Donald Trump and other top political figures through a company she started called GY US Investments, served as the vice president of the Hialeah, Florida-based reunification association. The group, founded in 2016, filed articles of dissolution on March 11, the day after Mother Jones revealed Yang’s role with the organization, one of around 70 international CPPRC chapters overseen by the United Front Work Department, a Beijing-based agency of China’s Communist Party. The Jamestown Foundation, a right-leaning think tank that advocates a confrontational US stance toward China, described the CPPRC as “one of the [People’s Republic of China’s] primary institutions for organizing and mobilizing the international Chinese diaspora in support of PRC policies.”

Yang, the former owner of the Jupiter, Florida, massage parlor where New England Patriots owner Robert Kraft allegedly solicited prostitution, became a significant GOP donor in 2016 and began posting pictures of herself with an array of Republican notables, including a selfie with Trump taken during a February Super Bowl party at Trump’s West Palm Beach golf club. In 2017, Yang launched GY US investments, which offered to arrange for its Chinese clients pictures with the president and the ability to “interact” with Trump and “other political figures” at the president’s private club, Mar-a-Lago, and in Washington. Top congressional Democrats on Monday asked the FBI to investigate Yang’s activity.

Yang spoke out publicly in interviews with NBC News and ABC News this week. “I love Americans. I love our president. I don’t do anything wrong,” Yang said in the NBC interview, asserting she is facing scrutiny because she is a Chinese Republican.

Yang, who said she arrived in the United States in 1999 and later gained citizenship, told NBC she has never had any contact with members of the Chinese government. She also said she posted pictures of herself with Trump and other Republican politicians to promote her business. “Nothing to do with politics, just like business networking,” she said.

Yang and her lawyers have declined to respond to repeated queries by Mother Jones and other media outlets that have been investigating her activities.

Former federal national security officials maintain that Chinese agents likely knew of Yang’s activities and could have exploited her connections and actions without her knowledge. “In itself that would have been the target of the Chinese intelligence services, who could have fed people without her even knowing it into that pipeline of her business,” Frank Figliuzzi, a former FBI assistant director for counterintelligence, told NBC.

In June 2016, Yang participated in the founding of the Florida China Peaceful Reunification Promotion Association, and she was photographed at its inaugural meeting, which was attended by China’s Houston-based consul general and deputy consul general. China News, which covered the event, reported that the Overseas Chinese Affairs Office of the State Council of China sent a message congratulating the group on its founding.

On December 2, 2017, Yang arranged for a group of Chinese Americans and Chinese citizens to attend a fundraiser for Trump at Manhattan’s Cipriani restaurant. The Miami Herald reported that Yang’s guests included Xianqin Qu, who was then serving as director of the CPPRC’s Florida chapter. At the event, Qu, met Trump administration officials, including senior White House aide Kellyanne Conway.

Qu maintained an active profile as head of the organization. When Chinese President Xi Jinping and first lady Peng Liyuan visited Trump at Mar-a-Lago in April 2017, she helped arrange for a crowd of Chinese Americans, many displaying Chinese flags and posters, to line a road near the hotel, where Xi and his wife stayed, according to a report in China Daily. “This is our way to express our love of China, which is becoming stronger,” Qu told the paper. Qu and other people listed as officers with the Florida reunification group did not respond to requests for comment.

Yang’s association with the reunification group—and another Communist Party-linked organization she has been affiliated with—has heightened concerns about her efforts to seek access to Trump, his family, and other top Republicans on behalf of herself and Chinese business executives.

“Although Ms. Yang’s activities may only be those of an unscrupulous actor allegedly selling access to politicians for profit, her activities could permit adversary governments or their agents access to these same politicians to acquire potential material for blackmail or other even more nefarious purposes,” top Democrats on four congressional committees wrote in a letter Friday to the FBI, the Secret Service, and the director of national intelligence. The Democrats asked the FBI to open “criminal and counterintelligence investigations into credible allegations of potential human trafficking, as well as unlawful foreign lobbying, campaign finance and other activities by Ms. Yang.”

Fallout from the Yang scandal has also affected another group of which she was part: the National Committee of Asian American Republicans. For this GOP outfit, she worked as a fundraiser and an organizer. Cliff Zhonggang Li, executive director of the group, announced Yang’s dismissal after she made headlines.

But Li attacked Democrats’ call to investigate Yang’s actions in a statement Tuesday. “We are appalled and dismayed to see the recent development of the Yang incident getting so far stretched to a level of biblical proportions,” Li said. He accused Democrats of wasting federal resources by “chasing fake and minor security threat[s].” Li previously told Mother Jones that he decided to boot Yang as a fundraiser for his group last year due to a disagreement over tactics. He said he was concerned that Yang and others were not complying with a law barring donations from foreign citizens, though he said he had no proof of any misconduct. “I wouldn’t rule out the possibility of wrongdoing,” he said.