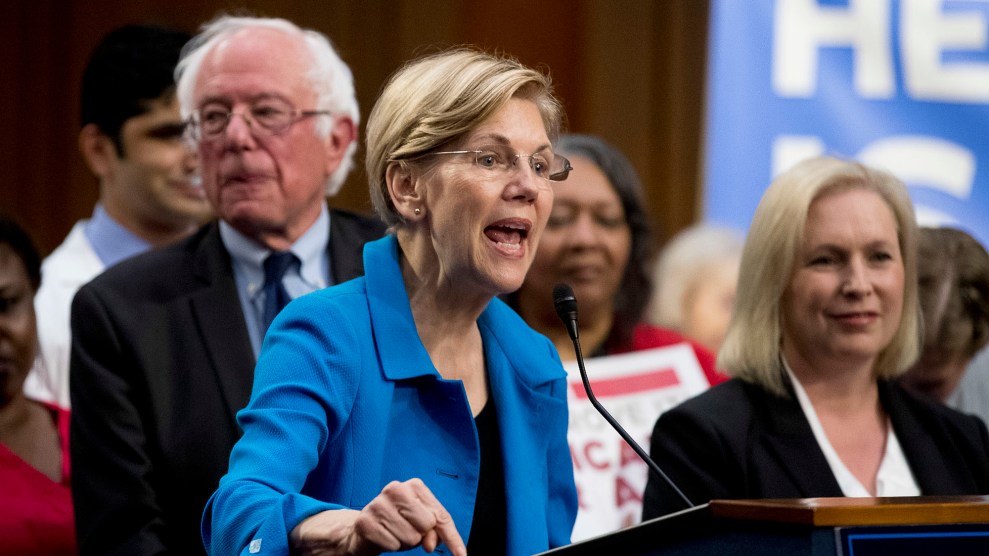 Democratic presidential candidates are blasting President Donald Trump’s latest effort to dismantle Obamacare, promising to fight back against the administration’s efforts to kick millions of people off their insurance plans and end protections for patients with preexisting conditions.

In a filing late Monday evening, the Justice Department announced that it now supports a widely criticized 2018 ruling by a federal judge in Texas declaring the entire Affordable Care Act unconstitutional. Democrats, who campaigned heavily on healthcare in 2018 and plan to do so again in 2020, wasted no time in responding—often in remarkably similar language. Bernie Sanders, Kamala Harris, Amy Klobuchar, and Kirsten Gillibrand all vowed to “fight” back against Trump’s move:

Over 30,000 Americans could die every single year if Trump gets his way and destroys the Affordable Care Act.

Our job is to fight back against his efforts to take health care away from millions of people. We must make health care a right through Medicare for All. https://t.co/rvCqBhQnkF

Trump and his administration are trying to take health care away from tens of millions of Americans — again.

We must fight back again with everything we've got. And in 2020, we need to elect a president who will make health care a right.https://t.co/O3gLYa7Yzy

The Affordable Care Act means that people can’t get kicked off their insurance for pre-existing conditions. With the stroke of a pen, this court filing by the administration would take that away. I will fight this. https://t.co/rlTcKRLSJD

If it’s a fight for healthcare this administration wants, it’s a fight they’ll get—and we will win. https://t.co/mO2hojmB4X

Elizabeth Warren took to Twitter to vow that Democrats would “not let the Trump administration rip health care away from millions of Americans. Not now. Not ever.”

I’ll say it for the zillionth time: We will not let the Trump administration rip health care away from millions of Americans. Not now. Not ever. https://t.co/QXzTFgkcv0

We fought and won the battle to keep health care coverage for millions, and we will do it again. Bring it. https://t.co/8dD2dPxZ9I

We will defend the ACA. We will protect the care of those whose lives depend on it. And we will get to universal, guaranteed, high-quality health care for every woman, every man, every child in this country. https://t.co/PT3QH9Gapc

Instead of continuing to attack the ACA, the American people deserve a White House that is actually committed to improving the ACA and establishing coverage for all. This White House has never laid out a plan to improve people’s health care. https://t.co/gL4KhbPBC7

One candidate conspicuously absent from the Twitter debate? President Trump.