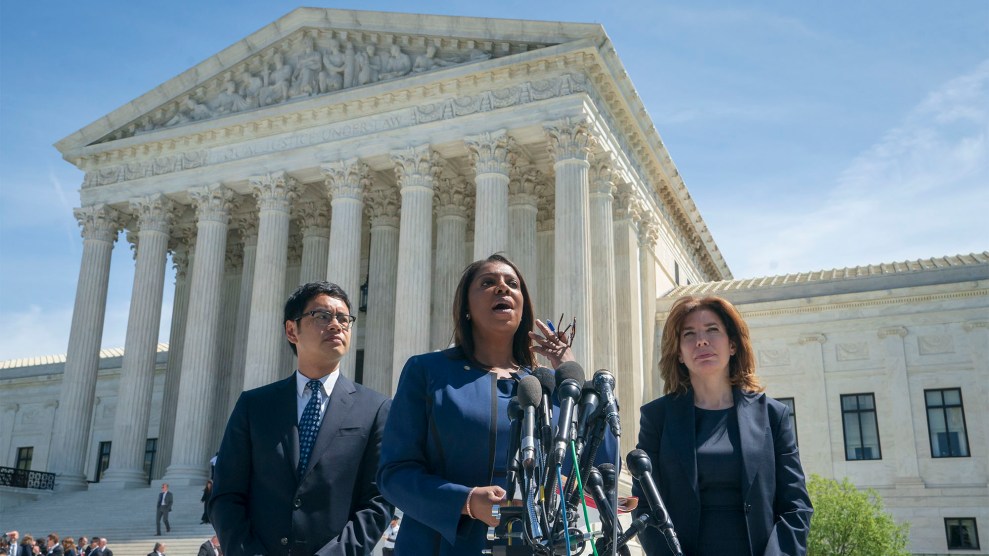 Six years after gutting the Voting Rights Act, the conservative justices on the Supreme Court seem likely to uphold the Trump administration’s addition of a citizenship question to the 2020 census by claiming it’s needed for better enforcement of the Voting Rights Act.

Commerce Secretary Wilbur Ross, who oversees the Census Bureau, wrote in March 2018 that the citizenship question was needed for “more effective enforcement” of the VRA. The conservative justices seemed sympathetic to this claim, even though their 2013 ruling in Shelby County v. Holder significantly weakened the law by neutering the requirement that states with a history of discrimination clear any voting changes with the federal government.

“Do you think it wouldn’t help voting rights enforcement?” Chief Justice John Roberts asked Barbara Underwood, the former New York attorney general, on Tuesday during oral arguments over a lawsuit brought by New York and 17 other states challenging the citizenship question. Roberts called the collection of citizenship data “the critical element” for the enforcement of voting rights cases. His question was echoed by Justice Brett Kavanaugh.

“The evidence before [Ross] was that it would not give better citizenship information,” Underwood responded.

If the census case follows the same pattern as other contested voting rights cases, the Supreme Court’s conservative majority is likely to uphold the question. Approving the citizenship question by invoking the Voting Rights Act would be a bitter irony for the communities of color that stand to lose the most from an unfair and inaccurate census.

The census determines how $880 billion in federal funding is allocated, how much representation states receive, and how political districts are drawn. If large numbers of immigrants don’t respond to the census, which has not asked about citizenship since 1950, the areas where they live could lose representatives in Congress and federal funding, and economic and political power could shift to whiter and more Republicans areas. Three federal courts have struck down the citizenship question so far.

Voting rights lawyers have dismissed the argument that the citizenship question is needed for better enforcement of the Voting Rights Act. “Adding a citizenship question to the census is not helpful for for Voting Rights Act purposes,” said Dale Ho, the head of the ACLU’s Voting Rights Project, argued before the court on Tuesday. The lawyers note that the Trump administration hasn’t filed a single lawsuit to enforce the law and has supported efforts to make it harder for people of color to vote, such as strict voter ID laws and aggressive voter purging. John Gore, the former assistant attorney general for civil rights in the Justice Department under Donald Trump, said the question was “not necessary” to enforce the Voting Rights Act, and six former heads of the Justice Department’s Civil Rights Division filed a brief with the court saying the question will “deter Latino and other voters from responding to the census” and “undermine enforcement of the Act.”

Kavanaugh said that a citizenship question had been recommended by the United Nations and was used by many other countries, and that it had been asked in the United States “in one form or another” since the 1800s. “Does that international practice, that UN recommendation, that historical practice in the United States, affect how we should look at the inclusion of a citizenship question in this case?” he asked Underwood.

The other major issue in the case was the credibility of Ross. Ross initially claimed that the Justice Department had “initiated” the request for the citizenship question, but evidence in the case showed that he aggressively lobbied for the Justice Department to formally request the question. Ross also claimed he had not discussed the question with White House officials but later admitted he had had conversations with “senior administration officials,” including anti-immigration hard-liners like Steve Bannon.

The liberal justices noted that the Census Bureau had opposed the addition of the citizenship question, with the bureau’s chief scientist writing that it was “very costly, harms the quality of the census count, and would use substantially less accurate citizenship status data than are available from administrative sources.”

“It did really seem like the secretary was shopping for a need,” said Justice Elana Kagan. “You can’t read the record without sensing that this need was a contrived one.”

“There’s no question the Bureau staff preferred not to have this question on the census,” Solicitor General Noel Francisco, who argued the case for the Trump administration, admitted. But he said that Ross’ decision was “well within his discretion.”

A decision is expected in late June and will have a major impact on the next decade of democracy in America.