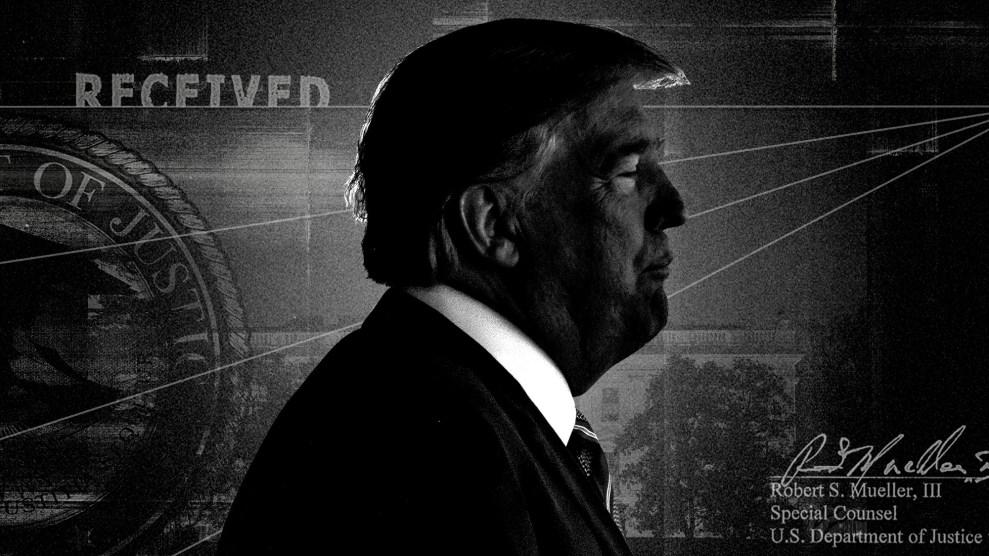 No collusion, no collusion, no collusion. Donald Trump has manically embraced that mantra as if it were a life jacket for his entire presidency. But as with so many of his proclamations—My inauguration was the biggest; I’ve done more than any other president; I have the best memory; I know more than the generals—there may well be a tell in his favorite chorus. That is, a sign that what he has been worried most about is…collusion. And the just-released Mueller report provides a big clue—sitting within some of the most-redacted pages—as to what might have unnerved Trump about the investigation into interactions between his camp and Russia: Roger Stone.

The report shows the many ways Trump has lied about his team’s contacts with Russia and about Vladimir Putin’s attack on the 2016 election—an attacked aimed at helping Trump win the presidency. Trump lied to the public when he said as a candidate that he had nothing to do with Russia, though he had been privately negotiating to develop a major tower project in Moscow.

It’s all but impossible to read this passage and not get the impression that when it came to WikiLeaks, Trump’s stance was, “Get me Roger Stone.”

He lied repeatedly during the campaign, the report notes, when he denied Russia was waging information warfare against the United States. He lied months after the election when the news broke of the Trump Tower meeting—where Jared Kushner, Paul Manafort, and Donald Trump Jr. met with a Russian emissary in order to get dirt on Hillary Clinton supposedly generated by a secret Kremlin operation to help Trump. He cooked up a phony cover story claiming this meeting was simply about adoption policy. Yet Trump has never seemed worried about getting caught in any of these lies. He doesn’t ceaselessly shout, “No lies.”

The report does depict certain actions that could fall under the collusion rubric: notably, that Trump Tower meeting and Manafort’s furtive discussions with a business partner allegedly tied to Russian intelligence that involved advancing a policy that would give Russia control of eastern Ukraine. But, as expected, Mueller’s investigation did not yield instances of Trump huddling with Russian hackers or trolls and telling them how to penetrate the Democratic National Committee servers or how to best use Facebook and Twitter for their clandestine social media assault. Putin did not need assistance from Trump or the campaign to wage his secret war against American democracy.

So is that the reason why Trump has constantly shrieked, “No collusion”? He knew he did not directly conspire with the Russians and realized that if he made direct collusion the issue—rather than the Trump-Russia contacts that might have encouraged the Kremlin or his steady stream of denials that supported and amplified Putin’s we-didn’t-do-it disinformation—he could skate by?

Or might there be another reason he so loudly protested “no collusion”? Maybe because he thought he himself might have been involved in collusion.

Which brings us to Roger Stone.

Many of the Mueller report’s passages regarding the veteran dirty trickster who has long been an adviser to Trump were redacted because Stone’s case remains open, as he faces a trial in November on charges of lying, witness tampering, and obstruction of justice. But the report refers to incidents during the 2016 race—while WikiLeaks was dumping Democratic emails hacked by Russian operators as part of Moscow’s attack—suggesting that Trump, Manafort, and deputy campaign chief Rick Gates were in contact with Stone about WikiLeaks and its anti-Clinton actions.

In the summer of 2016, Stone was publicly claiming he was in direct communication with WikiLeaks’ Julian Assange—he now says that was untrue. It’s not clear what Trump knew or believed about any interactions Stone may have had with WikiLeaks. But the report states, “Some witnesses said that Trump himself discussed the possibility of upcoming [WikiLeaks] releases [redacted].” The hidden portion of the sentence in all likelihood refers to Stone. (All direct references to Stone have been excised under the justification that revealing information about his case could harm this “ongoing matter.”) And when Michael Cohen testified to Congress in February, he asserted that Stone had informed Trump before WikiLeaks’ dump of Democratic emails at the Democratic convention that such a strike was coming.

Now look at the below passage from the Mueller report which obviously refers to the Stone case:

It’s all but impossible to read that and not get the impression that when it came to WikiLeaks, Trump’s stance was, “Get me Roger Stone.” And as the Mueller report notes, the Trump campaign “expected it would benefit electorally from information stolen and released through Russian efforts”—meaning the WikiLeaks dumps.

Stone’s relationship to WikiLeaks remains something of an open question. But it appears that Trump and his chief lieutenants believed Stone’s connection to Assange was real. Consequently, after the election, Trump would have had true cause to be concerned about Stone.

Trump presumably had not conspired with the Kremlin, but the Mueller report (and Cohen’s testimony) suggests Trump was in communication (directly or through aides) with his old pal Stone, who seemed at the time to have hooked up with WikiLeaks, a crucial player in Putin’s plot. Did Trump, Manafort, and Gates know exactly what Stone was doing with WikiLeaks (assuming his interactions with it were real)? Was he just kibbitzing? Was he providing advice to Assange? For all they knew then, Stone could have been fully collaborating with WikiLeaks, as it disseminated the material cyber-swiped by the Russians.

And if Stone was in cahoots with WikiLeaks, that meant there would be a straight line from Trump to a player in the conspiracy. In other words, collusion!

Whether or not Trump has feared that a focus on Stone would tie Trump to Putin’s clandestine operation, the Mueller report’s redacted passages about Stone do raise important questions. Did this political operative with a reputation for the underhanded activities actually provide the Trump campaign with inside information about WikiLeaks’ plans? What happened with Stone’s efforts to reach out to Assange and WikiLeaks during the campaign? Why was Stone publicly (and falsely) declaring during this stretch that the Russians were not behind the hacks? What did he and Trump discuss related to the WikiLeaks part in the of Moscow operation?

Mueller’s case against Stone has centered on allegations that Stone lied to investigators and Congress about his efforts in the summer of 2016 to communicate with WikiLeaks. Yet Mueller’s report casts Stone in an even more intriguing role. Was he really feeding Trump and his campaign useful information? Or was he bullshitting them about his access to WikiLeaks? For Trump, Stone could be the source of much worry. And Stone’s case is a reminder that even though Mueller has submitted his final report, there remain Russiagate mysteries yet to be explained. His trial might yield crucial information that is now withheld from the public.