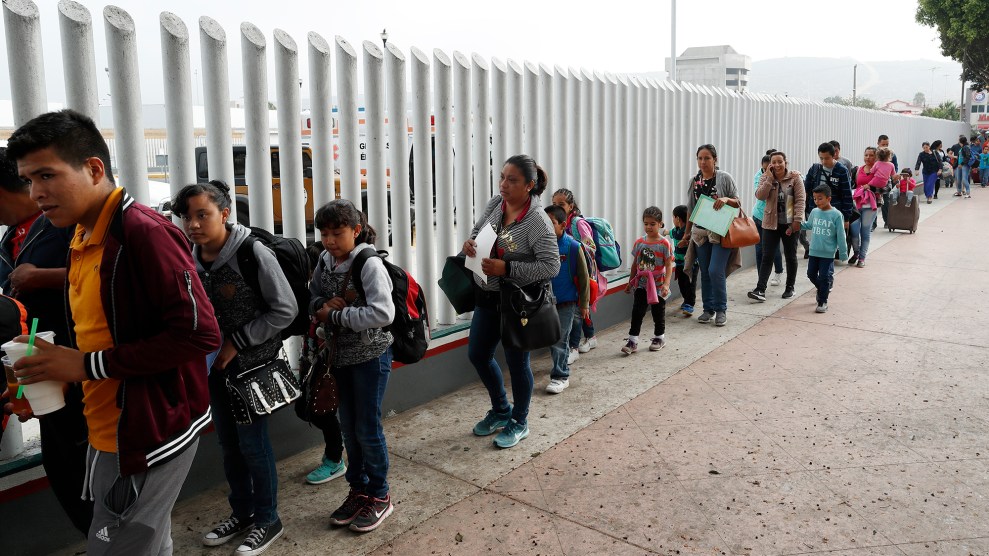 Two months ago, while reporting in Tijuana, I met a Salvadoran family hoping to apply for asylum in the United States. Juan Carlos Perla, his wife, and three young children had fled threats of violence in their hometown last fall, and like hundreds of thousands who have made the trek north in the last year, they were seeking safety and better opportunities for the boys here. “We’re going to tell [US officials] what happened to us, and I have faith in God that we’ll make it in together as a family,” Perla told me then.

They’d set out from El Salvador in late October and arrived at the US-Mexico border in January. Thanks to a Trump administration policy known as “metering” that limited the number of people who could apply every day for asylum, they’d been stuck for almost two months in Tijuana, sleeping in shelters while awaiting their turn. The last time I saw them, they were only a few numbers away from being called to present themselves to US immigration officials and seemed cautiously optimistic.

When their names were finally called,  they were detained for three days in extremely cold cells and then released back into Tijuana as part of the Trump policy known as Remain in Mexico.

I stayed in touch with Perla after my trip, and he periodically sent me updates over WhatsApp. He told me about how, when their names were finally called, they were detained for three days in extremely cold cells and then released back into Tijuana as part of Remain in Mexico, another Trump policy that forces asylum seekers to wait on their immigration court dates on the Mexican side of the border. So they returned to the shelter with a document that said they had to come back to the port of entry in a month to be taken to the court in San Diego, and they started to think over their options.

Perla noticed that a lot of the folks in Tijuana who’d had their court dates before him were being sent back across the line with a second court date but no results, and others came back with less hope. By the time I called him before his family’s case in April, they’d decided they wouldn’t go to San Diego. “I didn’t want to put my kids through the back and forth,” he told me, alluding to the fact that in many cases asylum seekers had been handcuffed and transported to court by a security firm that Immigration and Customs Enforcement hired. “I didn’t want them to see that and also didn’t want them to get sick.” And more importantly, he feared that if the judge denied their asylum claim, they’d be deported back to El Salvador—“and that would be a death sentence.”

Perla, who is in his mid-30s, delivered bread back home and said he was a victim of extortion. He feared he and his family would’ve faced violence if they didn’t leave their town, a place where parents were afraid to let their kids play on the street. He doesn’t like to talk specifics about who was making these threats, and he doesn’t want to mention gangs or the police in El Salvador because he believes their reach expands all the way north to Tijuana, a place whose track record of crime and violence against migrants had him on edge.

But with the United States and El Salvador no longer options, Perla and his wife decided to leave the temporary shelters and look for help so they could start a new life in Mexico. “We’ve gotten the idea of going to the United States out of our minds for now,” Perla said. “The laws are all messed up in the United States, and who knows when they’ll change, so I’d rather fight for my kids here.”

“The laws are all messed up in the United States, and who knows when they’ll change, so I’d rather fight for my kids here.”

In a way, this is precisely what President Donald Trump and Stephen Miller, the president’s senior policy adviser, are hoping for: that people seeking asylum get so frustrated and exhausted by obstruction, confusion, and threats of detention that they end up giving up. The goal seems to be to wear people down until they abandon their asylum cases.

Mexico’s response to all of this has been mixed. Mexico’s new president, Andrés Manuel López Obrador, said publicly last year that he would welcome Central American migrants and make it easier for them to stay and work in Mexico by giving out temporary visas. But some locals, including in Tijuana, haven’t exactly received migrant caravans with open arms, arguing Mexicans also flee to the United States because of poverty and violence and should be helped first. Trump has helped fan these flames by criticizing Mexican authorities for allowing hundreds of thousands of Central Americans to enter Mexico in the first place, and for not putting a stop to them before they reach the US border. Recently Trump even threatened to close the border with Mexico if Mexico didn’t toughen up on Central Americans. Meanwhile, when the Remain in Mexico policy was first implemented, Mexican government officials called it a “unilateral move” by the United States.

It’s unclear how many Central American families have chosen to make Mexico their new home, but the Tijuana office of the nonprofit Families Belong Together says the Perlas are one of several dozen families the organization has helped get settled in Mexico this year. Gustavo Magallanes Cortés, from the Baja California State Office for Migrants, said the local government doesn’t have concrete data on how many families are choosing to stay, but he knows there are more and more doing that now. “But the problem,” he told me, “is that the federal government isn’t even providing the most basic humanitarian aid for the people that, as a government, it is allowing into Mexico.”

Mexico has issued more than 130,000 humanitarian visas for Central Americans, most of them around the time of the larger caravans in late 2018.

It’s been reported that Mexico has issued more than 130,000 humanitarian visas for Central Americans, most of them to members of the larger caravans that arrived in late 2018. Perla and his wife have these visas, which allow them to live and work in Mexico for a year. But in recent months, the Mexican government hasn’t been issuing as many visas and has cut financial assistance to migrant services in cities that need it the most, like Tijuana, according to Baja California state officials—leaving overcrowded shelters to scramble to provide basic needs for thousands of new arrivals.

“The visa allows them to have formal employment, but like any other migrant they’re starting from zero here,” Magallanes Cortés said.

When I talked to Perla last week, he said that when he discussed the decision with his wife, he knew it wouldn’t be easy and that they’d be building a life in Mexico from scratch. But with the help of Families Belong Together and a friend Perla met in the shelter in Tijuana, the family was able to relocate to a small town about an hour southeast of Tijuana. Perla says the little town is calmer than Tijuana and significantly safer than their hometown in El Salvador. “We have faith that God always puts people with good hearts in our path,” said Perla, who recently started working at a nearby meat shop.

It’s been six months since the little boys, who range in age from one to six, slept in their own beds at home, and now they are finally starting to feel more settled.

He said his boss at the meat shop has donated food to the family, and a neighbor gave clothes to his sons. The landlord left a TV in the house, and a friend gave them a DVD player so the kids can watch movies. It’s been six months since the little boys, who range in age from one to six, slept in their own beds at home, and now, even though they didn’t make it to the United States, they are finally starting to feel more settled. “Honestly, they just want to be with their parents,” Perla said.

Perla said he knew getting asylum in the United States wouldn’t be easy, but he didn’t imagine the hurdles along the way and he certainly didn’t imagine they’d be sent back to Mexico after finally being able to ask US immigration officials for asylum.

A few days after the family moved into their new home, on April 8, a federal judge temporarily blocked the Remain in Mexico policy. The ruling did not apply to all asylum seekers, but even so, immigration officials did not return people over the weekend—a fact that wasn’t lost on Perla, who told me a few days later that he’d called the number on the paperwork he got at the San Ysidro port of entry and was given a date in July for another court appearance in San Diego. If US immigration officials were to stop sending asylum seekers back to Mexico and instead release them in US cities as their court cases progressed, Perla said he would rethink his decision.

But that window of opportunity didn’t last long. Tuesday afternoon, US officials resumed Remain in Mexico after a judge’s stay of the preliminary injunction, returning non-Mexican asylum seekers to Mexican border towns. When I relayed the news to Perla, he seemed confused with the back and forth—likely a common confusion for thousands of families like his across northern Mexico.

“There’s still a long time until July, so we’ll see if the laws change, which they seem to do a lot,” Perla said. “If they change, yeah, we’ll all go again, and if not, we’ll keep fighting here. God has our destiny in his hands.”

This article has been updated to note that many of the humanitarian visas Mexico issued were to members of the large caravans that arrived in late 2018.