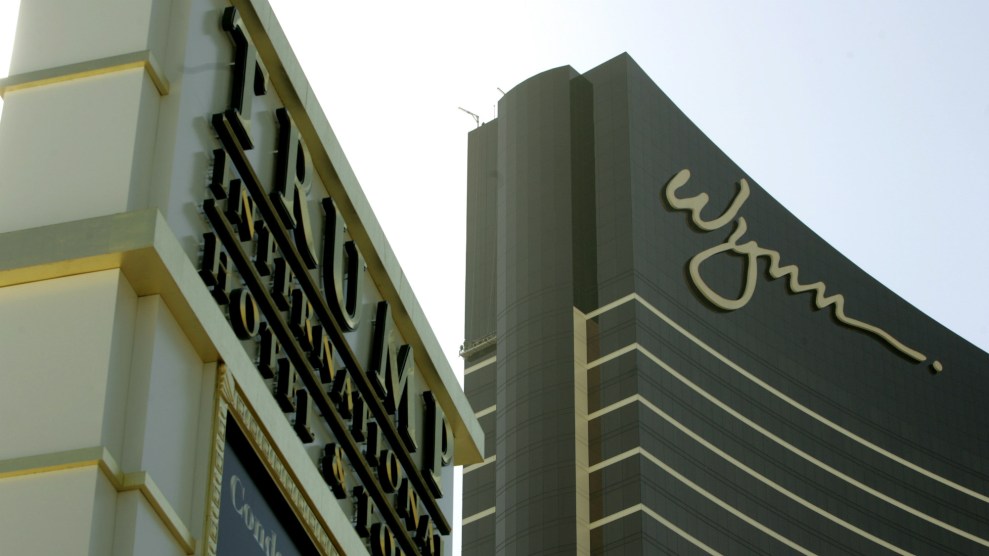 When President Donald Trump exited Air Force One at the start of his Saturday trip to Las Vegas, he was greeted on the tarmac by former casino executive Steve Wynn, a longtime business rival and friend who was a major fundraiser for the president during the 2016 campaign. Wynn has kept a low profile since resigning his post as CEO of Wynn Resorts in February 2018, after multiple accusations alleging sexual misconduct by Wynn with subordinates at the casino company.

“There were many victims.”

Wynn, who denies the allegations, also resigned from his post as the Republican National Committee’s finance chair last year. Despite Wynn’s denials, this past week, Massachusetts state gaming regulators released a scathing report finding that Wynn’s company had worked to cover up the allegations against Wynn. Speaking to Massachusetts regulators, the company’s new CEO testified that after taking over from Wynn, he “began to realize that there were many victims—and those victims felt powerless. For that, I am deeply remorseful. They felt that they didn’t have a voice. That if they were to speak up they could be retaliated against.”

Some of the allegations cataloged in the report included a $7.5 million settlement the company made with a manicurist who told her supervisor that Wynn had forced her to have sex and that she was pregnant with his child, that he exposed himself to employees, and made unwanted sexual advances. The company was fined $20 million by the Nevada Gaming Commission in February for its handling of the allegations against Wynn.

Since the allegations were made public, Wynn’s relationship with the Republican Party has been highlighted by Democrats, who note that despite his resignation from his fundraising post, the Republican National Committee has steadfastly refused to return any of the millions he’s given. Democrats have pointed out that RNC officials were quick to insist that Democrats return disgraced Hollywood mogul Harvey Weinstein’s donations—and many did—but have yet to fully separate themselves from Wynn.

Trump’s Las Vegas hotel is directly across the strip from Wynn’s casino, and while the two have sparred in the past in recent years their relationship has been friendly, with Wynn taking a high-profile role in fundraising for Trump, and comparing the president to Abraham Lincoln.