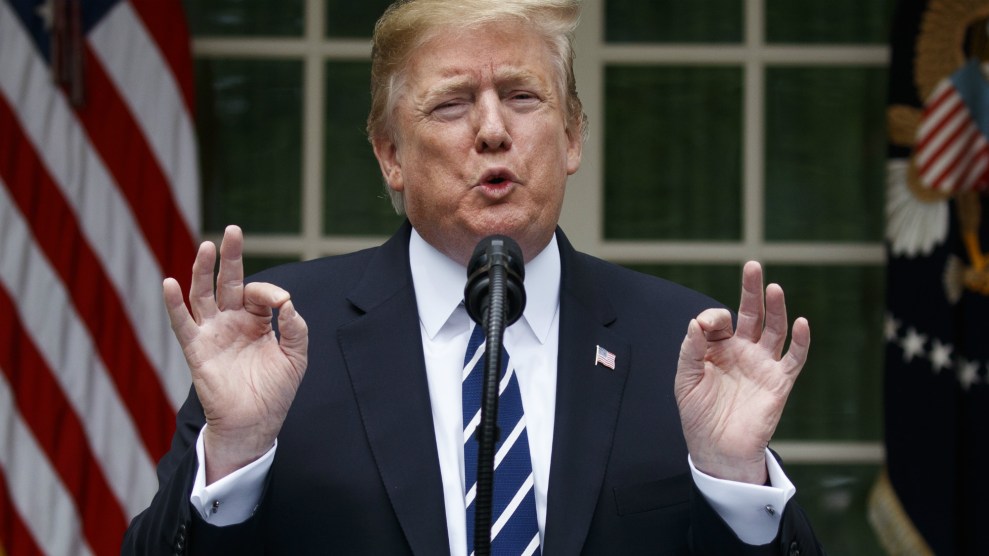 With his relationship with Deutsche Bank under increasing scrutiny, President Donald Trump, in a move not previously reported, has recently shifted some of his banking business from this global institution to a small and relatively new bank in South Florida. As Democrats in Congress have requested information from Deutsche Bank about its dealings with Trump—the firm has loaned him billions over the years—he appears to have closed his brokerage accounts with the German company and has deposited millions of dollars in the Coral Gables–based Professional Bank, which last year gave Trump an eight-figure loan to buy a property adjacent to his private club Mar-a-Lago.

Trump’s burgeoning business ties to Professional Bank comes amid escalating tensions between Trump and Deutsche Bank. Democrats have subpoenaed the German banking giant for financial records relating to Trump and his family. The bank has said it will abide by a court order to do so, but Trump, his children, and his company have filed a lawsuit trying to block Deutsche from turning over documents. On Wednesday, a federal judge in New York declined to block the subpoenas, but the Trumps are likely to appeal.

Deutsche Bank remains Trump’s largest lender. He owes the firm at least $300 million, much of it personally guaranteed, and it holds the mortgages on several of Trump’s most prized properties, including his Washington, DC, hotel. These loans have set off alarm bells with ethics experts who say the debts pose an unprecedented conflict of interest, especially since the bank has clashed with regulators around the globe, including the US Justice Department, and paid record fines for its role in the 2008 financial crisis and a scheme to help move billions of dollars out of Russia in defiance of Western sanctions.

Trump first turned to Deutsche Bank in the early 1990s, following a string of high-profile business failures that rendered him untouchable by most lenders. The German bank took a gamble on the brash real estate developer, helping to finance a string of big projects, several of which were successful for both parties. But, in 2006, Trump borrowed $640 million to finance the construction of a Chicago skyscraper, a project that soon went bad when the global financial crisis hit. Trump was unable to make payments on the massive loan. Before the bank could act, he filed a multibillion-dollar lawsuit claiming the bank had helped perpetuate the financial crisis that was now making it difficult to sell condominiums and repay his loan. Trump eventually settled the dispute with the bank but was reportedly declared “persona non grata” by Deutsche Bank’s commercial lending arm. Subsequently, he turned to Deutsche’s private bank—a special division that caters to ultra-wealthy clients, offering them loans that the bank otherwise might not grant in order to draw them into using the bank’s other services, such as its financial advisory consulting. Trump currently has four outstanding Deutsche Bank loans, all of them through its private bank. And when he came into office, he had at least two brokerage accounts with Deutsche Bank.

But personal financial disclosures filed by Trump covering 2017 and 2018 show that Trump no longer holds these accounts. The White House did not respond to a request for comment concerning when and why Trump shuttered them. A Deutsche Bank spokesperson declined to comment.

Why did Trump move away from his bank of choice? One reason may be that, according to the New York Times, Deutsche Bank cut off Trump’s ability to borrow money in 2016. The newspaper reported that during the presidential campaign the Trump Organization sought to increase an existing loan by $10 million but the request was turned down by a committee of bank executives tasked with evaluating financial risk. The committee’s chair, Christian Sewing, who has since been elevated to CEO, reportedly said Deutsche Bank would not lend more money to Trump until he was no longer pursuing elected office.

The Times recently reported that, around the time it was cutting off new loans to Trump, Deutsche Bank employees noted suspicious transactions in accounts belonging to Trump, the Trump Foundation, and the company owned by Jared Kushner’s family. The story alleged that senior executives at the bank ordered the employees not to share these reports with US banking regulators. Deutsche Bank has denied that they refused to let employees pursue any investigations of suspicious transactions.

In response to the Times article, Trump unleashed a torrent of tweets, declaring that he didn’t need to borrow money and, if he did, he would have his pick of lenders:

…..was very good and highly professional to deal with – and if for any reason I didn’t like them, I would have gone elsewhere….there was always plenty of money around and banks to choose from. They would be very happy to take my money. Fake News!

These claims are undercut by his latest banking partnership with Professional Bank, which in May 2018 loaned Trump $11.2 million to finance the purchase of a waterfront mansion adjoining Mar-a-Lago that was owned by his sister Maryanne Trump Barry.

Professional Bank, founded in 2008, is an odd choice for a mogul who has previously done business with some of the world’s largest and most well-established financial institutions. Deutsche Bank, which has been in business for more than a century, is the 15th largest bank in the world, with $1.3 trillion in assets. According to a Federal Reserve listing, of all American banks with assets of $300 million or more, Professional Bank is the 842nd largest bank in the US, with roughly $730 million in assets. By contrast, Deutsche Bank’s American subsidiary alone has $39.1 billion in assets.

According to Trump’s most recent financial disclosure, Trump not only borrowed from Professional Bank but opened a large money-market account with the firm, depositing between $5 million and $25 million. Trump disclosed earning between $50,000 and $100,000 in interest from the account. A spokesperson for Professional Bank declined to answer questions about the company’s most powerful client—including how a relatively sleepy financial institution came to the attention of the American president.

In recent years, Professional Bank has hired a handful of new executives who specialize in private banking, indicating an increased effort to cater to a high-net-worth clientele. In January, in what may be a sign of the bank’s rising profile, the firm’s president and CEO, Abel Iglesias, was appointed to the board of directors for the Miami branch of the Federal Reserve Bank of Atlanta. Iglesias was put in the post by the regional Fed’s board and not by the Federal Reserve’s Board of Governors, who are selected by the president. A spokesperson for the Federal Reserve Bank of Atlanta said there had been “no directives or contact” from the administration in regards to Iglesias’ appointment.

Given Trump’s often antagonistic relationship with the Fed, which he has blasted for raising interest rates, Iglesias’ appointment to a regional Fed position presents another conflict of interest posed by Trump’s business interests.

Strict conflict-of-interest rules govern the conduct of top federal officials, but none apply to the president. In theory, he can borrow money from and sell assets to whomever he chooses. However, presidents have traditionally taken steps to minimize any appearance of conflict. For this reason, Barack Obama declined to refinance his home mortgage when rates dropped midway through his presidency. “When you’re president, you have to be a little careful about these transactions, so we haven’t refinanced,” he said in a 2013 speech.

Kathleen Clark, an ethics expert and law professor at Washington University in St. Louis, told Mother Jones that banks cutting special deals for presidents is not an abstract worry. “The concern is that the president would be treated differently by the bank,” Clark says. “There’s actually a record of banks having a VIP program and treating politically powerful people differently than everyone else. So this is a concern that is well grounded in past practice.”