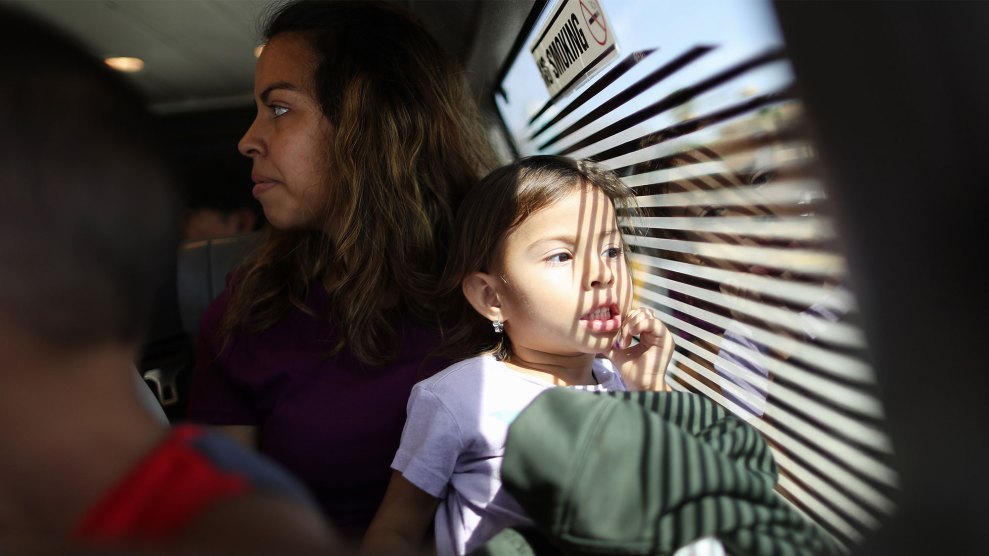 Near the Greyhound bus station in downtown San Antonio, a former Quiznos sandwich shop has its windows partially covered with pages from children’s coloring books. Near the door is a handwritten sign reading “Migrant Resource Center,” and alongside that is a small notice warning the media that there are no photos or video allowed. Inside, dozens of Central American migrant families, all of them recently released by US immigration officials, are trying to figure out what’s next.

When I stopped by on a recent weeknight, about 50 people were just starting to line up for dinner. On the menu that night: spaghetti with meat sauce and steamed vegetables.

“I need two—one for my dad, please,” said a kindergarten-age boy in Spanish, as he struggled to carry even one paper plate with his tiny hands.

“He can come and get it so you don’t drop it,” responded the woman behind the counter.

The boy nodded and smiled before making his way back to his parents, who were chatting with another family. His father, Hector Gabarrete, told me they had arrived in San Antonio the previous day and felt “blessed to be here” after a long journey from Honduras. When I asked him where they were going next, the boy said “Kentucky” with the same big smile he’d given the woman at the counter. Gabarrete said his sister-in-law was waiting for them there, on the other end of a 24-hour bus ride that left later that night.

The Gabarretes are one of the 248,000 families the Department of Homeland Security has encountered at the border in the last eight months, a 400 percent increase from the same time last year. DHS officials have said the agency is overwhelmed and its facilities are at capacity, and over the past three months, Border Patrol and Immigration and Customs Enforcement have released thousands of families in major southwestern cities after processing and detaining them at the border—a move that calls to mind President Donald Trump’s suggestion that he’d release migrant families in sanctuary cities in a seeming retaliation against municipalities that limit their cooperation with federal immigration authorities. All this despite reports of detention centers with large vacancies.

In March alone, 11,000 “non-criminal families” were released in US cities after being in DHS custody.

Most of these families are Central American asylum seekers who have been given a court date months from now. They’re scheduled to appear in front of a judge in the city they listed as their final destination, often located in a place where a friend or relative will take them in. Many are confused about where they are and how to get where they’re going. They often have no money or cellphone. With the federal government essentially wiping its hands of these immigrants, local governments have had to pick up the slack: In March alone, 11,000 “non-criminal families” were released in US cities after being in DHS custody.

In San Antonio, it started in late March, when hundreds of people started showing up at the Greyhound station late one night. Within hours of local news reports on TV and online, the bus station was overwhelmed with San Antonians donating pizza, baby clothes, diapers, snacks, and more in a spontaneous outpouring of support. “That’s just who San Antonio is,” said Colleen Bridger, the interim assistant city manager. “People recognize that these families have walked thousands of miles to get here.”

Until then, there had been dozens of families showing up every day at the bus station in need of food and money to buy their next ticket, but never this many, Bridger said. Catholic Charities USA and Interfaith Welcome Coalition had been assisting migrants at an average of about 50 a day. This was different.

“We had surges of 150, then 250 and 300 people coming in one day,” Bridger said, “and (the nonprofits) came to the city and said, ‘We can’t keep doing this—this is beyond our capacity. Will you please help us?'”

The nonprofits “came to the city and said, ‘We can’t keep doing this—this is beyond our capacity. Will you please help us?'”

That’s when the city quickly turned the vacant storefront across from the Greyhound station into a pit stop for families to rest, eat, call family members, and plan out their next steps. One city official described it to me as a “compassionate layover.” But the resource center wasn’t equipped to keep families overnight, so Catholic Charities helped create a shelter at the nearby Travis Park Church.

When families have to spend the night in San Antonio, volunteers at the resource center walk with them to the church, where they can sleep. “Last night we actually had 75 people sleeping here,” said Antonio Fernandez, CEO of Catholic Charities in San Antonio. “We know that there are more people coming than there was in the past, so we are preparing bigger coalitions to provide services for the families because we don’t know how long this is going to happen.”

The Gabarrete family slept in the church the night before I met them. By morning, families go back to the resource center for the day where the kids can draw and watch cartoons to stay occupied. Hector Gabarrete said he didn’t expect such a warm welcome in a US city, and that he felt “taken care of and safe.”

Fernandez said they’ve been spending about $14,000 each week for bus tickets for the hundreds of families that need help getting to their final destination.

They’ve planned to keep the center open until September. But, Bridger added, “I don’t think it’s going to be sustainable in the long haul.”

As far as the city’s contributions go, Bridger said it has provided in-kind donations to the NGOs, such as the storefront, but hasn’t directly provided financial assistance. She said they thought the emergency resource center would be open for about two weeks, but it’s been two months now. They’ve planned to continue with this setup until the end of the fiscal year in September. But, Bridger said, “I don’t think it’s going to be sustainable in the long haul.”

The city employees helping right now are either doing this as part of their already assigned duties or as volunteers. “Some of them are working a full day for the city and then volunteering for an eight-hour shift at the volunteer center, so we have people that are really tired and that are working really hard to make it a success, but we can’t do that indefinitely,” she said.

Because of that, she would like the federal government to help cover some of the cost moving forward. Bridger told me that the city of San Antonio has had many conversations with Border Patrol that “started out as, ‘What is going on?’ and have evolved into ‘Will you please not put them on a bus at midnight because they get here at 3 a.m. and it’s really hard to process them?'” (DHS officials did not respond to requests for comment.)

At around 7 p.m. the day I visited the resource center, I watched as a small group, including the Gabarretes, left the center carrying their to-go snack bags prepared by volunteers, and walked across the street to catch their buses. Just as the group left, about 20 more people showed up. They had just gotten off another bus that was coming from the border and needed help at the migrant center.

“It’s easy for things to go political when you don’t have a name and a face to go with the problem,” Bridger said. “We have names and faces of families who are here, so I think when it’s up close and personal, people do a better job separating the politics from the people.”