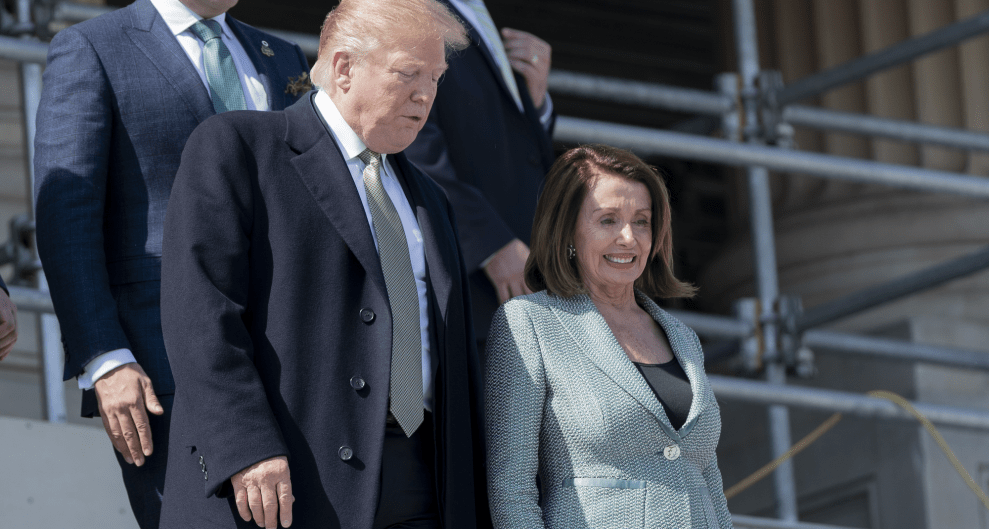 She stopped short, however, of endorsing the growing calls to impeach the president.

The accusation has clearly rattled the president. “I don’t do cover-ups,” Trump later said on Wednesday from the Rose Garden, in what appeared to be off-the-script comments. “You people know that probably better than anybody.”

According to Pelosi and Senate Minority Leader Chuck Schumer, the president had just walked out of a planned meeting on infrastructure at the White House out of anger over the “cover-up” line. “To watch what happened in the White House would make your jaw drop,” Schumer said after the meeting was canceled.

Trump hit back at the characterization—twice—claiming instead that he had been “extremely calm” while abruptly canceling the meeting.

"To watch what happened in the White House would make your jaw drop," Sen. Chuck Schumer says after clash at meeting with Pres. Trump on infrastructure. https://t.co/Ul9OUxLrzx pic.twitter.com/HEiEdQjrkv

I was extremely calm yesterday with my meeting with Pelosi and Schumer, knowing that they would say I was raging, which they always do, along with their partner, the Fake News Media. Well, so many stories about the meeting use the Rage narrative anyway – Fake & Corrupt Press!

The intense back-and-forth comes one day after former White House counsel Don McGahn, at the direction of the president, defied a House Judiciary Committee subpoena to testify before lawmakers as a part of the investigation into Trump’s potential attempts to obstruct justice. For some Democrats, McGahn’s no-show signaled the final straw in what they were willing to accept from the president’s disregard for congressional processes, and that impeachment proceedings were the only path left to hold him accountable.

"We believe that the President of the United States is engaged in a cover-up," Speaker Nancy Pelosi says after closed-door meeting with House Democrats. https://t.co/uvt1SkhnJF pic.twitter.com/EUzQFFfsti

But Pelosi’s remarks on Wednesday made clear that she intended to keep holding the line in her effort to avoid impeachment, as she believes it would appear overtly political and potentially cost Democrats in future elections. “Impeachment is so divisive to the country that unless there’s something so compelling and overwhelming and bipartisan, I don’ t think we should go down that path because it divides the country,” she told the Washington Post in March. “And he’s just not worth it.”

While the ongoing resistance from Pelosi to start impeachment proceedings may frustrate some Democrats, those who have vocally supported impeachment, including Rep. Alexandria Ocasio-Cortez, emerged from Wednesday’s meeting appearing united with the caucus.

“I was satisfied with the openness of the conversation and the discourse that we’re having as a caucus,” Ocasio-Cortez said after the meeting.

“I think we’re having thoughtful conversations about it and that’s the most important part,” she continued when pressed on impeachment.