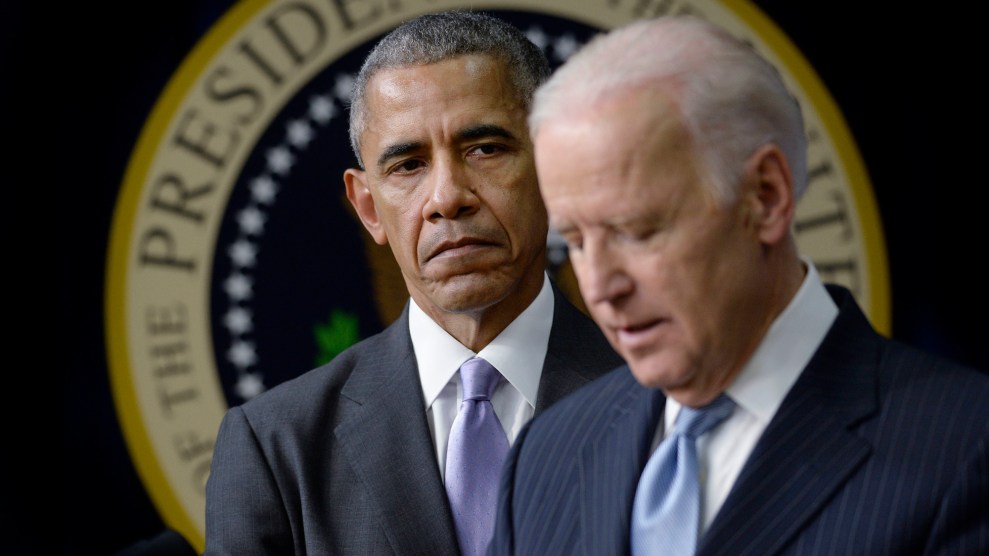 Thursday’s presidential primary debate was full of attacks on Donald Trump. But the Obama administration also found itself on the defensive, as Democratic White House hopefuls took aim at some of the policies promoted by the 44th president and his second-in-command, Joe Biden. The former vice president has staked much of his campaign on the successes of the Obama-Biden years. But early in the debate, NBC’s José Diaz-Balart asked Biden about the 3 million immigrants deported during Obama’s tenure. “President Obama, I think, did a heck of a job,” Biden said. “To compare him to what [Trump] is doing is…close to immoral.”

California Sen. Kamala Harris—one of Biden’s top rivals for the nomination—took issue with that. “On this issue, I disagreed with my president, because the policy was to allow the deportation of people who, by ICE’s own definition, were non-criminals,” she said. Harris noted that as California’s attorney general, she’d told the state’s sheriffs that they didn’t necessarily have to cooperated with federal immigration officials.

Later, Biden touted his efforts as vice president to negotiate a 2012 deal with Senate Majority Leader Mitch McConnell to avert the so-called “fiscal cliff.” This time, it was Colorado Sen. Michael Bennett who objected. “The deal that he talked about with Mitch McConnell was a complete victory for the Tea Party,” Bennett said. “It extended the Bush tax cuts permanently. The Democratic Party had been running against that for 10 years.”

The criticism is striking given Obama’s tremendous popularity among Democrats. During the 2016 primary, Hillary Clinton premised her debate strategy on wrapping herself in Obama’s legacy. The Democratic nominee should be the person who “can build on the progressive accomplishments of President Obama,” she told voters during a debate in February 2016. “The coalition that President Obama put together to win twice is a coalition that I can put together and add to.”

But among the 20 Democratic contenders who polled and fundraised their way to the first round of primary debates this year, mention of Obama was scant. On Wednesday night, candidates invoked Obama’s name only twice: Minnesota Sen. Amy Klobuchar praised Obama’s support of a public insurance option as a “bold approach” to health care, and former Maryland Rep. John Delaney noted that the Obama administration had given the wealthy businessman an award for “lending to disadvantaged communities.”

Biden bucked the trend on Thursday, mentioning his ex-boss’ name at least half a dozen times, on topics ranging from gun control to Iraq. When NBC’s Chuck Todd pointed out Obama’s failure to win passage of legislation putting a price on carbon emissions, Biden drew loud applause by praising the former president’s leadership in bringing about the landmark Paris climate agreement.

In some respects, the reluctance of Biden’s competitors to link themselves to Obama this week has been puzzling. As the Atlantic’s Edward-Isaac Dovere recently noted, many of the 2020 hopefuls have sought Obama’s counsel as they navigate the crowded primary field. And while Biden’s been the most effusive with his praise of the last Democratic president, he hasn’t been alone in offering it. During Cory Booker’s campaign kickoff in February, the New Jersey senator told reporters, “I miss Obama—and I miss her husband, too.” Former Texas Rep. Beto O’Rourke called Obama the “greatest president of my lifetime” during a CNN town hall in May.

But with Obama’s vice president dominating the early polling and touting the past administration’s achievements at every turn, the strategy makes sense—especially after Trump’s surprise victory opened space to critique Obama from the left. When Hillary Clinton went negative during the 2016 cycle, she often tore into Sen. Bernie Sanders (I-Vt.) for being critical of Obama. Clinton won that battle but lost the war; Obama’s economic policies have been under particular scrutiny from the party’s progressive wing, and many of Sanders’ ideas have made their way into the Democratic mainstream.

Obama spokesperson Katie Hill seemed to underscore this idea in a statement to Dovere. “The policy debate has shifted since 2007 and 2008, and that’s good—it’s evidence of the progress made since then by activists and elected officials at all levels,” she said. “Big, bold ideas are a sign of the Democratic Party’s strength, and President Obama urges everyone running to be transparent with voters about how these ideas will work in the nitty-gritty, how they’re paid for, and how they’ll affect the lives of all Americans.”