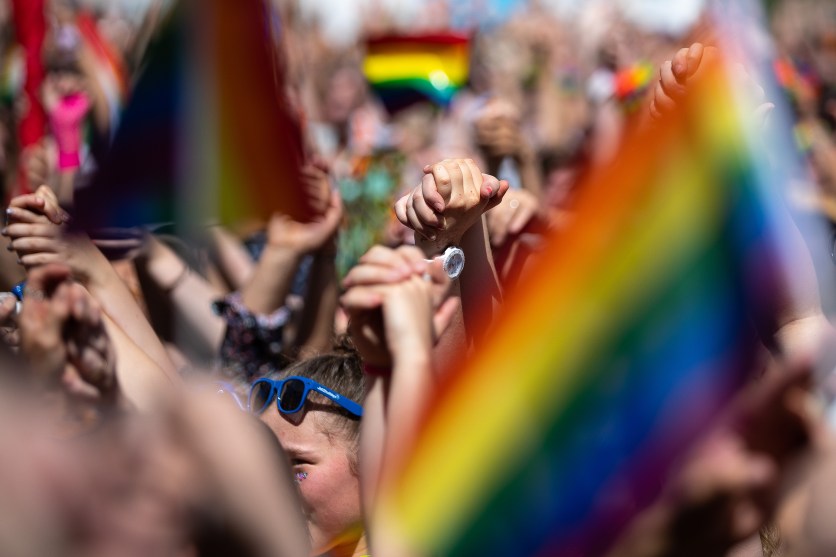 It’s June! And for many of us, that can only mean one thing: Pride month.

June marks the official start of LGBTQ pride celebrations and commemorations in cities around the world. But this year is especially meaningful; 2019 marks the 50th anniversary of the uprising-turned-riot named after Stonewall, the small New York City bar where the modern LGBTQ rights movement all began. From gay marriage to the House Equality Act, Stonewall holds steady as the foundation upon which LGBTQ rights protections continue to be built.

To celebrate, the NYC Mother Jones podcast team pranced around the city to talk to some of the people who played a major role in queer history, visit a landmark beach, and hear from the next generation of LGBTQ activists. Our first stop was Jacob Riis Beach, one of the most important queer spaces in New York City, where we talked about just that, queer spaces, with people who understand their importance.

Then, we headed into the heart of Manhattan and caught up with two Stonewall veterans who were there that night when things got wild. Meeting up with trans activist Miss Vicky and Martin Boyce, we get a rare and vivid picture of what happened when the police raided the bar, and how it sparked a movement. “Faggots are always interesting to people,” says Boyce.

Queer people and their stories existed long before Stonewall, and few films have told those stories better than Before Stonewall, which was first released in 1984 and is being re-released this month by First Run Features. Director Greta Schiller shared some of the fascinating back stories of the film that chronicles the rich history of queer existence with vibrant archive footage. Contextualizing the social and political life of queer people culminating in that explosion of frustration and liberation on that fateful night in 1969, Schiller dives into how the film holds up 25 years later.

Spoiler: it holds up really well!

Check all of this out and more on the newest episode of the Mother Jones Podcast—and happy Pride!