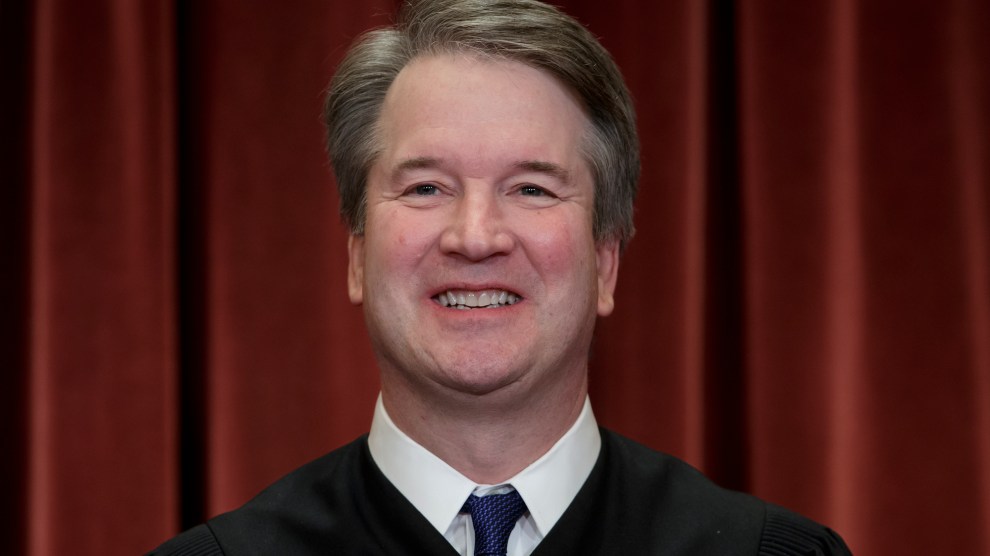 Supreme Court Justice Brett Kavanaugh squeaked through his confirmation hearing last year after being accused by Christine Blasey Ford of sexual assault during a high school party. Women’s groups vigorously fought his confirmation and warned that his presence on the court would pose a significant threat to hard-fought legal rights for women.

So it’s no small irony that this year, thanks solely to Kavanaugh, for the first time ever, the majority of Supreme Court law clerks are female. And perhaps it’s also no small irony that on Friday, feminist icon Justice Ruth Bader Ginsburg publicly gave Kavanaugh kudos for his hiring. In an otherwise deadly dull speech she gave to the 2nd Circuit Judicial Conference in New York, Ginsburg said, “Kavanaugh made history by bringing on board an all-female law clerk crew. Thanks to his selections, the Court has this Term, for the first time ever, more women than men serving as law clerks.”

The Supreme Court was an entirely male bastion until 1944, when Lucile Loman broke through and clerked for Justice William O. Douglas. Since then, women have remained in the minority well into the 21st Century. A National Law Journal study found that between 2005 and 2017, twice as many men became clerks as women. The man Kavanaugh replaced, Justice Anthony Kennedy, had a particularly egregious record on this front: Between 2005 and 2017 he hired six times as many men as clerks as women.

Ginsburg’s speech was otherwise news-free, despite her tantalizing dips into some of the most contentious cases on the docket this term that have yet to be decided. For instance, she mentioned Department of Commerce v. New York involving a citizenship question on the US Census, in which new evidence has recently surfaced indicating that the Justice Department lied to the Supreme Court when it claimed such a question needed to be included on the census to help enforce the Voting Rights Act.

In fact, the evidence showed, the Trump administration wanted to add the question to help bolster the power of white Republicans. The evidence reached the court in May after the hard drives of a Republican redistricting strategist surfaced in an unrelated lawsuit, more than a month after the case had been argued. Ginsburg didn’t provide a glimpse into what the justices might be doing with the new information.

The court still has 27 undecided cases on the docket for this term, and the last day scheduled for the release of opinions is June 24. But the only indication Ginsburg gave of how the term might end were cryptic comments suggesting that the court was sharply divided on the most controversial cases. She noted that so far this term, the court has issued few contentious 5-4 opinions where the justices were sharply divided between conservatives and liberals. But she warned that those numbers may not be indicative of much, since the most high-profile cases often don’t get decided until the very last days of the term. “Given the number of most-watched cases still unannounced,” Ginsburg said. “I cannot predict that the relatively low sharp divisions ratio will hold.”