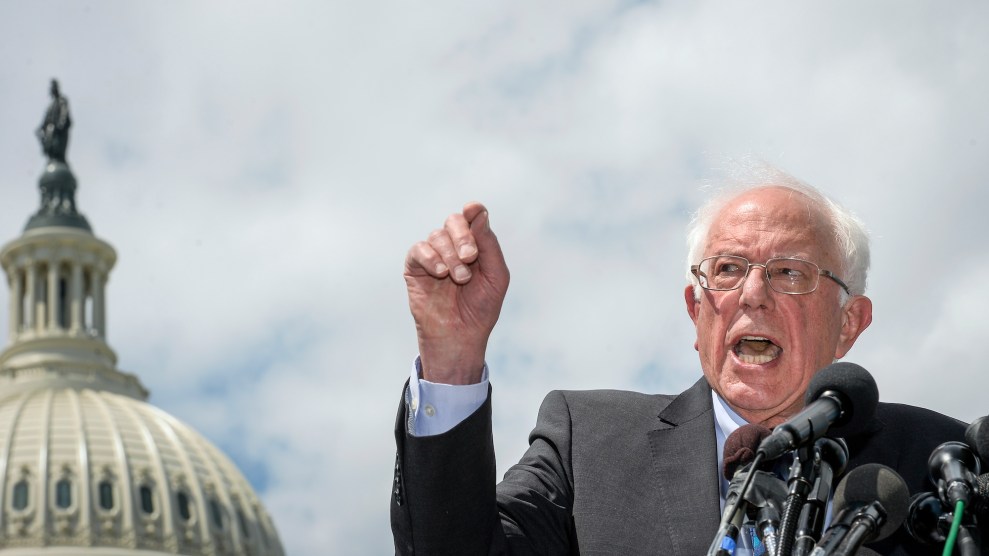 On Monday, the Vermont senator unveiled a revamped version of his College for All Act. The legislation also calls for eliminating tuition and fees at two-year and public four-year colleges and universities. Rep. Ilhan Omar (D-Minn.)—who is still paying off more than $15,000 in student loans after graduating college in 2011—introduced a House companion bill to eliminate all student debt, and Rep. Pramila Jayapal (D-Wash.) introduced a House bill to make public college free.

In recent years, researchers and policymakers have begun to view student borrowing and its side effects as an economic crisis. The Federal Reserve blames student loan debt for young adults’ declining rate of homeownership, and its current chairman, Jerome Powell, has worried publicly that it could stymie long-term economic growth.

Sanders’ debt relief plan goes far beyond anything the democratic socialist touted during his dark horse run for president in 2016. For all the praise and criticism he drew at the time for his “free college” proposal, he had much more modest ideas about how to help those who’d already graduated. He called for cutting interest rates and allowing student loan refinancing—something Hillary Clinton had also suggested.

Sanders and Omar say they’d pay for their debt relief plan with a tax on Wall Street speculation. Sanders’ office points to research from progressive economist Robert Pollin that indicates the tax could raise $2.4 trillion over 10 years. But the lawmakers also argue that their proposed relief package would provide at least $1 trillion in economic stimulus that would justify the expense. Economist Stephanie Kelton, who advised Sanders’ 2016 campaign, worked closely with Sanders and Omar on their new proposal.

Until Sanders’ announcement Monday, Sen. Elizabeth Warren (Mass.) had been the standard bearer for bold student loan reform in the Democratic primary fight. Warren’s plan proposes a sliding scale that would cancel up to $50,000 for borrowers with household incomes below $250,000, a threshold that would provide relief for 95 percent of borrowers and cancel debt entirely for 75 percent of them. Her targeted system would particularly benefit black and Latinx borrowers, who default at a much higher rate than white borrowers and face discrimination in the job market.

Omar offers a simple explanation for her and Sanders’ blanket approach. “People who take out student loans aren’t wealthy,” her office said in a statement. A “complicated means-tested plan to keep out a doctor or lawyer who might be earning a good living,” it continues, may dissuade students who pursue those expensive degrees from accepting lower-paying careers in public service.

There’s merit to that argument, says Julie Margetta Morgan, who researches student debt at the Roosevelt Institute, a left-leaning think tank. A study she co-authored last year found that debt burdens for costly degrees hadn’t necessarily translated into higher earnings over time, and those who do have higher earnings might be holding off on other trappings of adulthood to cover their loan payments. “Nonpayment isn’t necessarily the best way to measure whether people are struggling with their student loans,” Morgan says.

Morgan adds that Warren and Sanders are tackling the crisis from different perspectives. “The Warren plan looks more closely at targeting the burden of student debt as it relates to racial disparities, and the Sanders plan leans into the strength of universality,” she explains. “There are merits to both.”

But what’s critical is that both Warren and Sanders have paired their student debt visions with a plan to lower the cost of college, says Ben Miller, who works on higher education issues at the Center for American Progress Action Fund. (Warren, like Sanders, proposes free tuition for two- and four-year public colleges.) Still, Miller says, it won’t solve the problem entirely. “Even if you could snap your fingers and cancel student debt, people will still be taking out student loans, particularly for private colleges and graduate school” Miller says. “They really do go hand-in-hand—you can’t do loan cancellation without doing something about affordability going forward.”