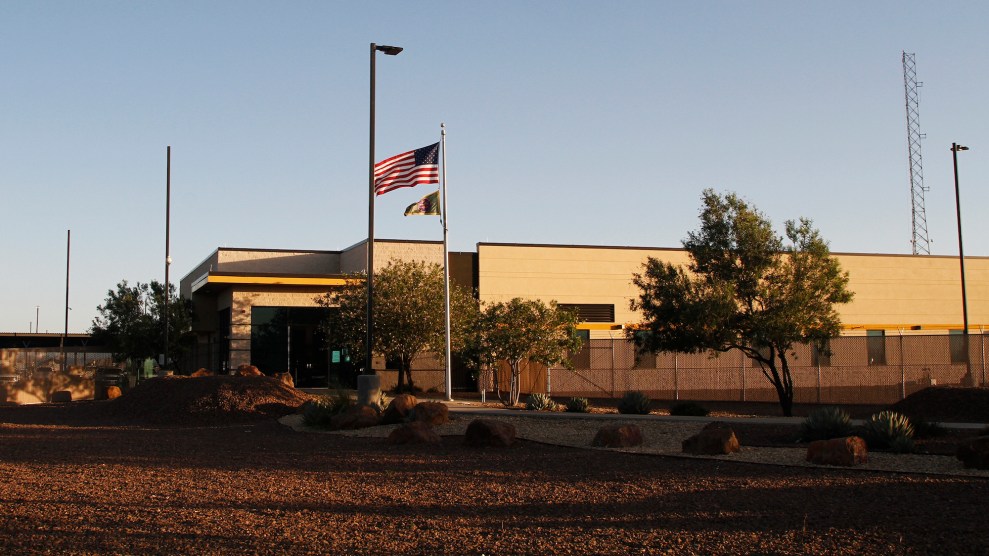 The entrance of the Border Patrol station in Clint, Texas. Cedar Attanasio/AP

Last week, migrant children being held at a Border Patrol station in Clint, Texas, told attorneys about horrifying conditions the Trump administration was forcing them to endure. After crossing the border on their own or being separated from relatives, the children were being held without enough food, water, clean clothes, and access to showers.

As the Associated Press reported on Thursday, three girls were trying to care for a two-year-old boy who had wet his pants without a diaper. Some of the children had been kept at the facility for more than three weeks, despite a legal requirement that unaccompanied children be transferred from Border Patrol holding centers to longer-term facilities run by the Department of Health and Human Services’ Office of Refugee Resettlement after three days.

Late Monday, officials confirmed that hundreds of the children at Clint were being transferred to other facilities, most of them to ORR shelters. Shortly before that announcement, I spoke with Clara Long, an attorney and senior researcher at Human Rights Watch, about what she saw at Clint and two other Border Patrol stations in Texas. The interview has been edited for length and clarity.

Mother Jones: Where were you in Texas last week, and what were you doing there?

Clara Long: I went to the El Paso area to meet with children who were detained by Border Patrol. I witnessed three different facilities: Clint, the Santa Teresa Border Patrol Station, and something called El Paso Border Patrol Station 1. I was part of a team of doctors and lawyers working as part of the Flores case. That’s a really old settlement between the government and lawyers that seeks to put some standards on the way that children can be treated when they’re in US custody.

We did not have access to inspect the facilities directly. What it was was having the Border Patrol bring us a roster of names and ages and us being able to choose who we wanted to speak with. We started with the youngest kids, and then we also tried to ask for the kids who it appeared had been there the longest. That’s how we chose the kids among the 350 who were there at Clint. I think, ultimately, we spoke with over 30 groups of kids.

MJ: Is there an interaction that has stuck with you from your time at Clint?

CL: I spoke with this pair of brothers. One was 11; the other one was a toddler. They came into the conference room obviously dirty. The 11-year-old had a lot to say. What he was saying was that he had been keeping it together because he was the only person who was taking responsibility to care for his younger brother. And as we’re sitting there talking to him, the younger brother started to fall asleep. We pulled up two office chairs. He just fell asleep between the chairs and took an hour-long nap.

I have a kid about that age. So you know, feeling like I was sending this little toddler back into a cell with only his fairly young brother was a terrible moment. We gave him some food. The older brother said he was really hungry. Some of the most difficult times were saying goodbye to these kids and feeling like we were just sending them back to these mass cells.

MJ: You also met with children taking care of kids they weren’t related to, right?

CL: Yeah, there were a lot of kids who were pre-verbal who we couldn’t get a story out of. The only thing we knew about them we knew from older children who were informally taking care of them. We called some two-year-olds who were there without any siblings at all. And when they came to the conference room, they would come with another 14-year-old or 15-year-old kid. This happened multiple times. And the agents would say, “Oh, well this person is taking care of the kid.”

At one point, I had in front of me a seven-year-old who had crossed the border with an aunt who had been raising her. She was separated from that aunt. That was basically all I was able to get out of her because she decompensated. She just couldn’t speak. She had this sort of keening cry where she was making this constant whimpering noise. The only thing that ended up helping her calm down was that she happened to be in a conference room [with] the teenager who had been taking care of her. So we took her over and sat her on the lap of the teenager.

MJ: Were you able to get in touch with any of the kids’ relatives?

CL: One little girl had the words “US parent” written on her wristband. I called the number and talked to the parents, who had no idea where she was being held.

Another set of young brothers, who had been separated from an older sister at the border, were distraught because their older sister had their parents’ telephone number. They had been there for about two weeks with no contact with their family at all. What I did with them was just started looking in Facebook. I found a cousin, aunt, and father. We were able to connect with their father. We sent them back to the cell with two copies of all of their parents’ information written out on a piece of paper.

MJ: What does an average day look like for kids in these facilities?

CL: So what they said basically is, “What we do all day is sit in the cell.” Two times a day, it sounds like there’s some cleaning happening, so they get out into the hallway. Some kids said this is the best time of the day because they get out into the hallway for 10 to 20 minutes. Some kids said they’ve had very short periods of time where they’ve been let into an outdoor space, where some of the boys said they’ve been playing soccer. They said 10, 20, 30 minutes outside every once in a while, not necessarily an everyday thing. They said that there was three times that they were given food a day. A lot of kids said it wasn’t enough food and that they were hungry. Then a lot of kids complained that it was really unpalatable. And it was, of course, the same [food] every single day, for some kids close to a month.

MJ: Immigrant advocates have been warning about abysmal conditions in Border Patrol facilities for years. What was different about what you saw last week?

CL: Human Rights Watch did a report about these dangerous conditions in holding cells just last year. The Obama administration did not do enough to address these conditions. What’s different now: I’ve never seen kids being held for these long periods of time.

CL: Well, there’s some great models that communities along the border have developed. Humanitarian respite centers where people can access medical care, food, a change of clothing—you know, really treating people with a sense of concern for their welfare and for their dignity. Places like Annunciation House in El Paso or the Sacred Heart Church in McAllen are actually doing this. And the US government should take a page out of their book.

There are common-sense custody determinations that could be made to not separate children from their non-parent family members. You’re ripping a child who has been in many cases raised by a family member away from that parent figure.

MJ: It was just reported that some of the children at Clint were moved to another Border Patrol facility in Texas. Is there any reason to believe they’ll receive better treatment there?

CL: Sadly, no. I understand them mostly to be transferred to El Paso Station 1, which is the third station I went to. Most of the kids who I called on the roster they gave me had just been there with their families for a few hours. I did speak with one family who had been there for six days. Based on what they told me, the conditions there were worse, rather than better.

MJ: What did they say that made you think the conditions were worse?

CL: The two things that were different and worse were that they were actually keeping the lights on all night, which is a common practice at Border Patrol stations. And also the temperatures in the cell—in line with what has been documented across the border—were frigid.

After this interview, HHS said that it identified space for 249 children at Clint last week, and that those children should be in ORR custody by Tuesday.