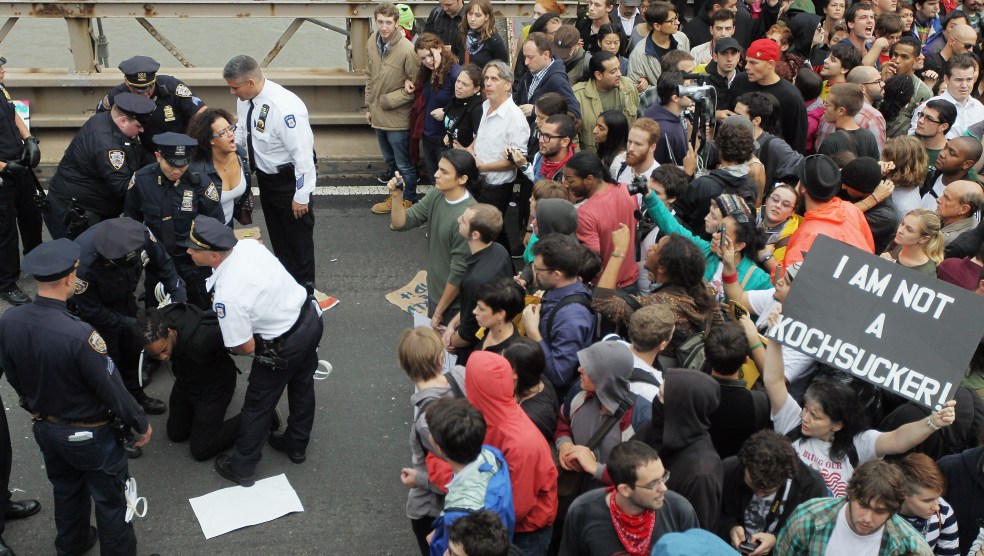 Police arrest demonstrators affiliated with the Occupy Wall Street movement after they attempted to cross the Brooklyn Bridge on the motorway on Oct. 1, 2011.Mario Tama/Getty Images

“Millennial” was a marketing term before it was a category of political analysis, but after the global financial crisis in 2008 we heard the first whispers of Western youth rising up in decades. In 2011 Occupy Wall Street and the “movement of the squares” kicked off, inaugurating some real intergenerational conflict, even if we didn’t generally understand it that way at the time. But when voters went to the polls in America and the UK, the tensions were clear: Age cohort was an unexpectedly valid predictive instrument, and young voters were supporting marginal old socialist candidates.

A few years out from the first Millennial roar, Bernie Sanders and Jeremy Corbyn are serious contenders for state power thanks to young voters. Scholars and political commentators are getting used to talking in terms of generational cohorts, even if they’re not always happy about it. Once a popular cluster of jokes about interns and avocados, the generational label has become a political football, with Democratic presidential candidates vying for the votes of angry, indebted young Americans.

While some researchers were caught flat-footed by the Millennial political turn, Keir Milburn, lecturer in political economy and organization at the University of Leicester in the UK, was ready to interpret. In his new book, Generation Left, he writes:

During a period of declining wages, welfare rights and living standards, stories that chip away at young people’s expectations are useful to the Right. But the Generation Snowflake stories are not really aimed at the young. They are best seen as self-justifying and comforting morality tales for the wealthier sections of older generations.

In the book, Milburn tracks the development of this political cohort from its birth in the streets in the wake of the 2007–2008 financial crisis to its run at political office and perhaps back again. As someone who writes on generational politics, I was relieved to read a book from a theorist who is taking age cohorts seriously. There has been a serious rupture in the political evolution of young people, however well-heeled commenters might try to obscure it with safe-space cracks and fake trend stories.

After we spoke when I was going through the transcript I realized that in our whole conversation neither of us mentioned the “M” word.

How did you come to the topic of this new generation and the left?

I’ve been an activist on the UK radical left for around 30 years. As such I’ve lived through several different waves of protest and politics and have long been interested in those moments when politics and the commonsense understanding of what’s possible seem to change very quickly, and 2011 seemed to be one of the moments.

The spur to writing this book was, in part, to do with my own biography. I wanted to understand the emergence of a new young left from 2011 onwards and think about how veterans of past left generations should relate to the new one. This interest became heightened following the electoral turn of the movements and in particular the 2015-6 battle for the Democratic presidential nomination between [Bernie] Sanders and [Hillary] Clinton and then the 2017 UK general election, in which the opening up of a substantial international political generation gap became inescapable.

What do you say to people who write off generational analysis, particularly comrades on the left?

The media center doesn’t want to talk about generational analysis because that’s not their politics. There are now a few young, left commentators who get themselves on the BBC regularly, but it’s small. On the right you see a lot of fear-mongering, especially about Alexandria Ocasio-Cortez. We have this new Brexit Party and the vast majority of their voters are older people.

On the left you do sometimes hear criticism from “class-first” Marxists who don’t like talking about any divisions in the working class, whether race or gender or age cohort. I do think about age cohorts as a division of the working class—that’s how I want to do generational analysis. In the book I quote Stuart Hall, who says “race is the modality through which class is lived,” and I think about it that way.

One of the problems with doing generational analysis is that people are wont to confuse cohort effects and life-cycle effects. Can you explain the difference between the two and how it shows up in your study?

Cohort effects are about the particular historical circumstances that a generation encounters, how they’re shaped by common events, etc. Life-cycle effects are things that happen to everyone as they age. But people do get them confused, and it’s important to get it right.

So there’s a broad assumption that everyone will get more conservative as they age. The right is counting on it. But it might not happen. If people get more conservative over time because they accumulate assets that they own—whether that’s houses or pensions or stocks, etc.—if that’s why they’re getting more conservative, and this generational cohort is locked out of that asset ownership, then maybe they break that correlation between age and politics.

I liked the way you frame the 2008 bailouts as one of the greatest non-wartime mobilizations of resources that was devoted to keeping a financial event from becoming a political event. What role did this have on the generational formation?

The bailouts of the banks were ultimately bailouts of asset holders, which also made them bailouts of people who are dependent on assets, as compared to people who are dependent on labor. Older people, retired people, pensioners are disproportionately dependent on assets. The pensions themselves have been financialized and tied up in that system. Elderly people in the UK also rely on their homes as assets to trade for elder care in retirement. You can’t rely on social provision or savings, so what a lot of people do is sell their home and move into something smaller or assisted living and use the money from the sale to provide for themselves.

Young people, however, are overwhelmingly dependent on wages, not assets. And workers in the UK have seen the worst decade of wage growth since the Napoleonic era. And the bailouts were financed on austerity basically, which is the withdrawal of social provision, so that protection is undermined, too. We can see how the bailouts then pitted these groups against each other.

So the younger cohort comes to stand for the non-asset-holding class as a whole? There’s a concern with generational analysis that we’re going to end up declaring war on poor old people on Social Security.

Yeah, no, pensioners are not the enemy. We should be careful about that. In the UK, for example, 25 percent of the elderly don’t own their homes, so they’re locked out of that whole plan. I think the way forward has to be an alliance between the young people I’m writing about and members of the older cohort who have been excluded or who have ties to older left-wing positions. We can see that with Bernie Sanders in the US and Jeremy Corbyn in the UK and young people aligning behind them.

Speaking of Corbyn and Sanders, you write about a phenomenon you call “the electoral turn”—can you describe it? And what’s the relation between the electoral turn and the 2011 Occupy protest sequence?

You had these extra-parliamentary movements coalescing in the streets around the world. The left was exercising power in the streets. And these are young people, movements of young people. And when you see these movements hitting the limits of their tactics, like occupation, you see them pivoting to the ballot box. In the US and the UK that means you have young leftists voting for parties they wouldn’t have considered before, Democrats and Labour, behind these candidates, Sanders and Corbyn, who have been on the margins for decades. In a lot of cases these are the same people who were in the streets a few years before. In countries with different electoral systems it’s been a little different. In Spain the M15 movement turned into its own political party directly.

One of the obstacles to this electoral turn that you write about is the threat of a “capital strike.” Tell readers what that looks like, and on a spectrum between not-gonna-happen and inevitable, how big a concern is it for you?

A capital strike is an attack by capital that’s an attempt to force a political change. So the “strike” is a refusal by capitalists to invest in the economy. They sit on their money to try and cause a crisis, or they move it out of the country. You might see an attack on the currency in an attempt to cause bank runs. They use the media as well. The media hates Corbyn, it’s sort of unbelievable. John McDonnell [the Labour “shadow chancellor”] has been very sensitive to this risk and he’s been on a sort of tea-and-biscuits tour [of] the capitalists, trying to reassure them that they can work together, that if Labour fixes the trains then everything runs smoother for them too, etc.

The real concern is that you see something like what happened to Syriza in Greece. They come in as a leftist party and they’re hit with this tremendous pressure from the European Central Bank and it just destroys their agenda. They had the backing of the people in the referendum, they voted “oxi” [no] to austerity, but Syriza was forced to capitulate, and as a result they’ll probably be out of power soon.

The UK is not in the Eurozone, which is a big deal in terms of avoiding outside pressure on monetary policy. America obviously has a lot more autonomy than Greece when it comes to determining its own economic policies. It is less of a threat in that way. And, in a way, we’re already seeing a capital strike, aren’t we? Rates of investment are extremely low. So perhaps they don’t have as much room to maneuver.

If the electoral turn does pay off, do you think these movements might have to return to the streets to protect their wins?

Yeah, there has to be an alliance between the electoral part and the social movements. But those movements also have to remain autonomous.

Malcolm Harris is the author of Kids These Days and the forthcoming Shit Is Fucked Up and Bullshit.