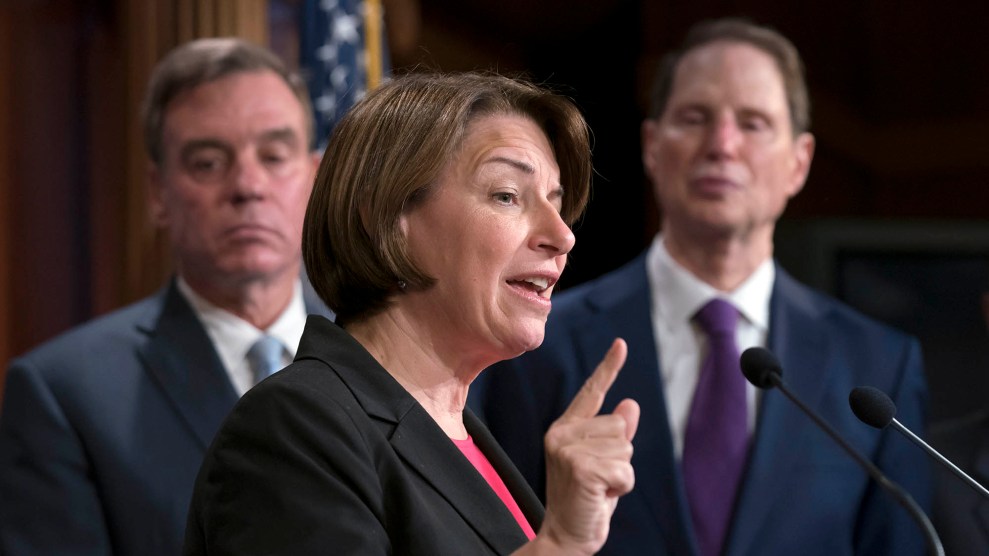 A group of Congressional Democrats blasted Mitch McConnell, the Republican senate majority leader, for blocking election security legislation on Tuesday, accusing him of leaving the nation vulnerable to even worse election meddling.

“As of this morning, hostile foreign actors are going to interfere in the 2020 election in a way that makes what happened in 2016 look like very small potatoes,” said Sen. Ron Wyden (D-Ore.). “And it’s not just going to be the Russians,” he added, noting that he was saying this as a member of the Senate Intelligence Committee, which regularly receives classified briefings.

“Hostile foreign actors are going to interfere in the 2020 election in a way that makes what happened in 2016 look like very small potatoes.”

Democratic presidential candidate Sen. Amy Klobuchar (D-Minn.), a leading proponent of election security legislation and ranking member on the Senate Rules Committee, which has jurisdiction over federal election regulation, said the White House and McConnell have teamed up to thwart needed action.

“I know with our bill that was bipartisan we were stopped in our tracks by those two forces,” said Klobuchar, who complained that former White House Counsel Don McGahn had personally called Republican senators to lobby against such steps.

The Democrats’ press conference came the day before former special counsel Robert Mueller’s highly anticipated public testimony before the House Intelligence and Judiciary committees, hoping to use his findings detailing Russia’s targeting of voting administrators and equipment vendors to shame congressional Republicans into action. Some Republicans have co-sponsored election security bills—including Sen. James Lankford of Oklahoma and Sen. Marco Rubio of Florida—but their support hasn’t made much difference in the face of McConnell’s opposition.

McConnell maintains that Washington has already done enough to secure elections, pointing to $380 million in election security grants appropriated in March 2018 and to better information sharing between the federal officials and local election administrators. McConnell has argued that additional proposals that may expand federal spending and responsibility in elections are part of a broader Democratic push for “socialism,” and an attempt to help Democrats at the polls. “I’m open to considering legislation, but it has to be directed in a way that doesn’t undermine state and local control of elections,” McConnell recently told Fox News‘ Laura Ingraham. “The Democrats, Laura, would like to nationalize everything. They want the federal government to take over broad swaths of the election process, because they think that would somehow benefit them.”

Wyden, who has developed a reputation for sounding early public warnings based on classified concerns, said that alongside already well-known election security vulnerabilities, he was focused on a new worry come 2020.

“What we saw in 2016 with John Podesta was just the beginning,” he said. “If you ask me about one huge new vulnerability… I think personal devices and the risk that that presents to both personal and national security will be a major target in 2020.”

Sen. Dick Durbin (D-Ill.), who is number two in the Senate’s Democratic leadership. said that McConnell doesn’t want his GOP colleagues to have a chance to support election security bills if they made it to the senate floor. “McConnell is not afraid of the Russians, he’s afraid of the United States Senate,” Durbin said. “He’s afraid to bring any measure to the floor on election security for what might happen on the floor of the United States Senate.”