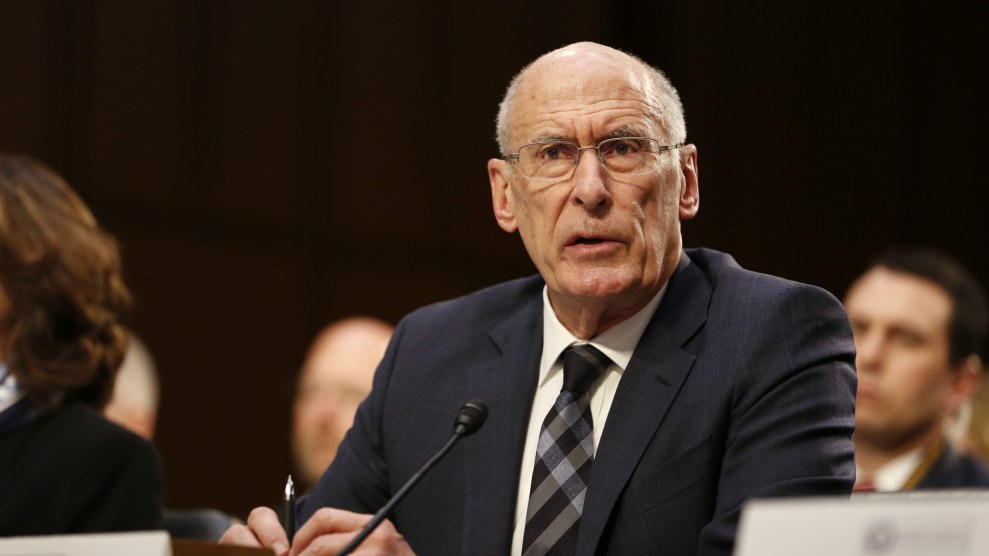 In the coming days, Dan Coats is expected to announce his resignation from his post as the director of national intelligence—a job that involves pulling together information from all of the nation’s spy agencies and presenting it to the president. And his reported replacement is a Texas congressman best known for his over-the-top cheerleading in Donald Trump’s war against Robert Mueller.

Coats, a former senator from Indiana, will step down soon, but there is not an exact date, the New York Times reported Sunday. Coats clashed with Trump numerous times during his tenure as one of the nation’s top spymasters. Shortly after Trump declared he believed Russian president Vladimir Putin’s insistence that Russia didn’t interfere with the 2016 election—over the assessment of American intelligence agencies—Coats publicly disagreed. When Trump unexpectedly announced that Putin would be welcome at the White House, Coats didn’t hide his uneasiness.

Coats also issued a report this spring showing that despite Trump’s claims otherwise, North Korean dictator Kim Jong-un is not likely to give up his nuclear weapons through negotiations.

Coats’ differences with Trump were apparently biggest over how the United States should perceive Russia, with Coats arguing that it should be viewed as an adversary.

The New York Times and Axios both reported that Coats’ replacement is likely to be Rep. John Ratcliffe, a Republican and third-term Congressman who represents suburbs of Dallas. Unlike Coats, Ratcliffe seems to go out of his way to agree with Trump. Ratcliffe, who serves on the House intelligence and homeland security committees, has done his best to use his post to cheer on Trump in his battle with special counsel Robert Mueller.

During Mueller’s testimony to Congress last week, Ratcliffe accused Mueller of breaking the rules by investigating whether the president obstructed justice (Mueller did not). Ratcliffe also claimed that Mueller could not testify on Russian interference because the Department of Justice is investigating Democratic involvement.

On Sunday, just as his name was being bandied about as a replacement for Coats, Ratcliffe was appearing on CNBC to suggest that attorney general William Barr would “deliver justice” to any Obama officials who committed crimes during the investigation into the Trump campaign’s involvement with Russia.

“They accused Donald Trump of a crime and then they try and reverse engineer a process to justify that accusation,” Ratcliffe said. “So I’m not going to accuse any specific person of any specific crime, I just want there to be a fair process to get there. What I do know as a former federal prosecutor is that it does appear that there were crimes committed during the Obama administration.”