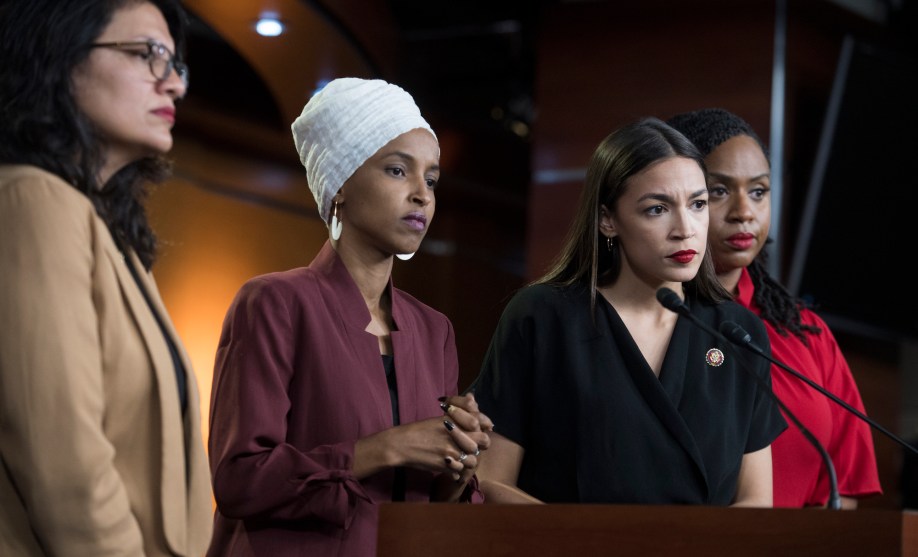 The four progressive women of color targeted in President Donald Trump’s racist Twitter diatribe fought back on Monday afternoon by urging their supporters to stay focused on more important issues.

“Do not take the bait,” said Rep. Ayanna Pressley (D-Mass.) in a packed Capitol press conference. Pressley went on to call the president’s “xenophobic, bigoted remarks” a “disruptive distraction” from “the callous, chaotic, corrupt culture of this administration.”

On Sunday, President Trump tweeted that “‘Progressive’ Democrat Congresswomen'”—referring to Pressley, Reps. Alexandria Ocasio-Cortez (D-N.Y.), Ilhan Omar (D-Minn.), and Rashida Tlaib (D-Mich.)—”originally came from countries whose government are a complete and total catastrophe” and told them to “go back and help fix the totally broke and crime infested places from which they came.” Three of the four women were born in the United States with the exception of Omar, who is a naturalized American citizen.

In her remarks, Pressley did not address the president by name, simply calling him the “occupant of the White House” because “he does not embody the grace, empathy, integrity that office requires.” But she quickly switched gears from the tweets, asking Americans to instead retrain their focus on the issues before Congress: high prescription drug costs, the affordable housing crisis, and the unsanitary and unsafe conditions at migrant detention centers.

Omar, for her part, took the opportunity to highlight the president’s past bigoted remarks. “This is a president who has said ‘Grab women by the pussy,'” Omar said, referring to the infamous 2005 Access Hollywood recording. “This is a president who calls black athletes ‘sons of bitches.'” To Omar, his behavior amounts to “the agenda of white nationalists—whether it’s happening in chat rooms or happening in national TV,” Omar said. “Now it’s reached the White House garden.”

Omar concluded her comments with a call to impeach the president, who she said has made a “mockery of our constitution.” Reps. Ocasio-Cortez and Tlaib echoed her.

Trump has repeatedly criticized members of the “squad” since they took office earlier this year, taking the lead from members of his party who have replaced House Speaker Nancy Pelosi with AOC as their favored boogeyman. The four congresswomen were back in the headlines this week when long-simmering tensions with Pelosi boiled over into public view when Pelosi minimized their influence during an interview with the New York Times. “I’m sure Nancy Pelosi would be very happy to quickly work out free travel arrangements!” Trump concluded in his Twitter thread, referring to the feud.

When Ocasio-Cortez took the microphone, she said she was “not surprised” by Trump’s racist comments, particularly in the wake of “authorized raids across this country,” referring to the 2,000 undocumented immigrants targeted in Immigration and Customs Enforcement raids conducted in nine cities on Monday.

“We’ll stay focused on our agenda, and we won’t get caught slippin’,” Ocasio-Cortez said. “Weak minds and leaders challenge loyalty to our country in order to avoid debating the policy.”