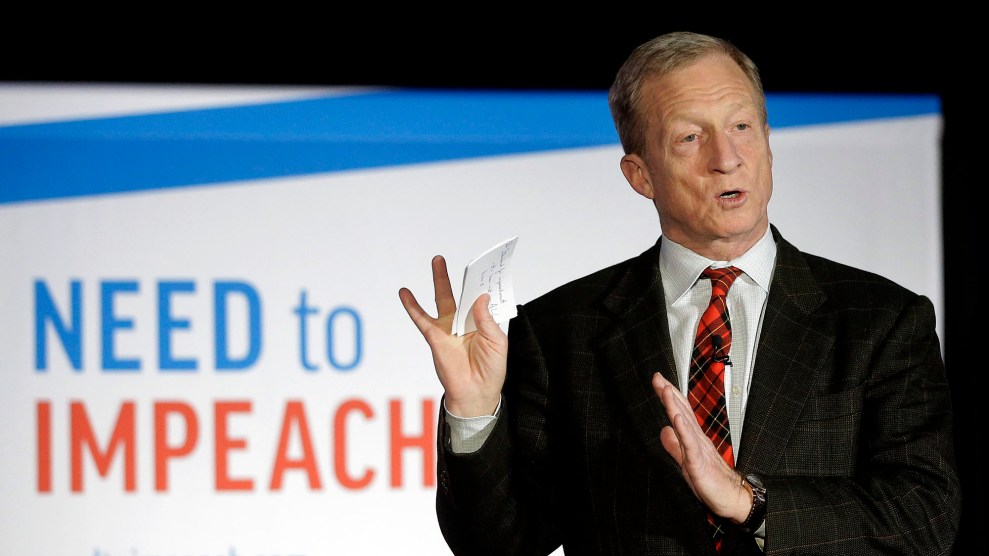 As Tom Steyer kicks off his White House bid, he has one major advantage in his quest to put together a winning presidential campaign: a pair of massive email lists from organizations he founded to fight climate change and call for the impeachment of President Donald Trump. Steyer’s campaign has already rented and sent emails to these lists—a move that could help him recruit volunteers and solicit enough contributions to qualify for the Democratic debates.

“Individuals are everything, so lists are essential.”

Since 2017, Steyer’s face has been a regular presence on television and social media, urging people to sign a petition supporting impeachment proceedings against Trump. The petition, organized by the Steyer-founded organization Need to Impeach, hasn’t achieved its stated goal—but, according to the group, it has netted the names and contact information of more than 8.2 million people. Need to Impeach has bragged that its email list is larger than the National Rifle Association’s, and Steyer has reportedly poured more than $50 million into the group, even renting billboards in New York’s Times Square. In the run-up to the 2018 election, he also spent more than $57 million on NextGen, a constellation of progressive organizations he created that focus on climate change and other issues and have become major players in Democratic politics. NextGen claimed to have had 750 staffers and 16,000 volunteers canvassing battleground states last year. Now, those investments could pay off for Steyer’s own campaign.

Since launching his campaign on Tuesday, Steyer has sent at least two emails to the Need to Impeach list and one to the NextGen list. The emails each contained multiple links to his campaign website or ActBlue page, both of which allow supporters to donate to Steyer’s campaign. The ActBlue page asks readers to “donate just $1 today to help Tom get closer to the debate stage.”

When I asked Need to Impeach about the arrangement, a spokesperson for the campaign responded that Steyer’s “presidential campaign is currently renting data that he helped to create from NextGen America and Need to Impeach.”

The spokesperson, Alberto Lammers, said that the campaign had consulted outside counsel regarding the legality of the rentals and was paying fair market rates for the data. It’s unclear if other campaigns will be allowed to rent the Need to Impeach list, as well. Portions of the Need to Impeach list are available through brokers, who sell access to email lists.

NextGen America, a nonprofit advocacy group that also has a super-PAC arm called NextGen Climate Action, told me that on Tuesday, it allowed Steyer’s campaign to rent its email list for a one-time announcement that Steyer would be leaving the group and running for president. That’s not a privilege that Steyer’s opponents will have, as no candidates will be allowed to rent the list going forward.

NextGen spokesperson Maya Humes also noted that aside from renting out its list, NextGen won’t be supporting Steyer’s White House bid. “NextGen America has no plans to endorse in the 2020 presidential election and will not coordinate with any candidate’s campaign,” she said in a statement.

Email lists help campaigns engage potential voters, and they’re invaluable for encouraging donations, says Sheila Krumholz, executive director of the Center for Responsive Politics, a money-in-politics watchdog group. Candidates such as Bernie Sanders and Beto O’Rourke used their own huge lists to rake in millions of dollars when they announced their campaigns earlier this year. Because Steyer is a billionaire who plans to self-fund his campaign, Krumholz notes, he may not need to pursue big-dollar donors. But he’ll still need contributions from thousands of small-dollar contributors in order to participate in the debates.

“He’s desperate to amass donors, not money,” says Krumholz. “He needs individual donors to support his campaign to be eligible for debates, and he’s a late entrant.”

To appear on the debate stage at the end of July, Steyer would likely need to contributions from 65,000 individual donors. To qualify for the fall debates, he’ll need 130,000 donors.

“Individuals are everything, so lists are essential,” Krumholz says. “And they’re far more valuable if they’re people who have signed onto your issues—like NextGen and Need to Impeach. These are people who have already in some ways allied with Steyer ideologically.”