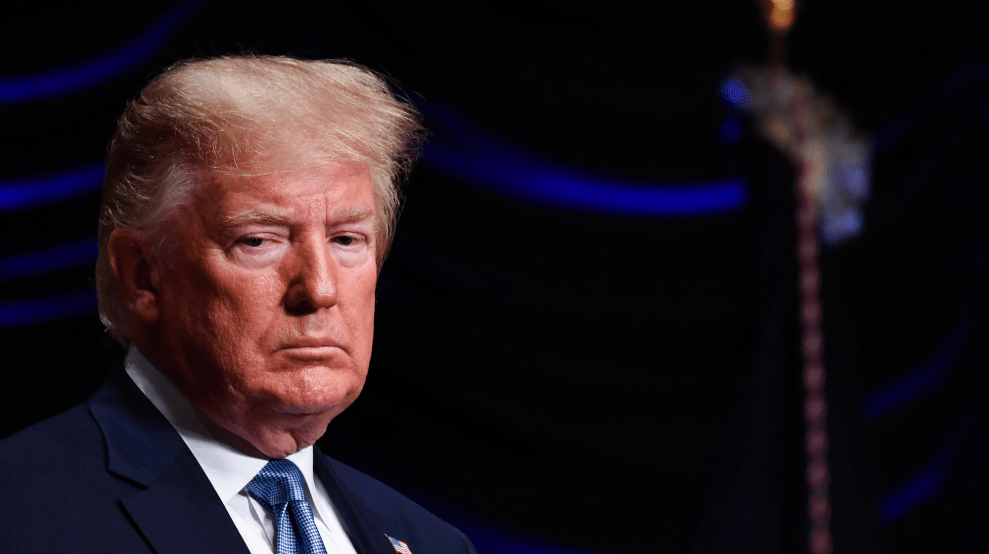 President Donald Trump is refusing to back down from his racist tweetstorm in which he told four Democratic congresswomen of color—all of whom are American citizens, with only one born outside of the United States—to “go back” to the countries from which they came. Instead, he ratcheted up his attack on Monday by asserting that the congresswomen owe him an apology.

The incendiary claim is all but guaranteed to keep the president’s tweets from Sunday in the headlines, as he continues to target freshmen Democrats Alexandria Ocasio-Cortez (N.Y.), Ayanna Pressley (Massachusetts), Rashida Tlaib (Mich.), and Ilhan Omar (Minn.) in unabashedly racist terms.

When will the Radical Left Congresswomen apologize to our Country, the people of Israel and even to the Office of the President, for the foul language they have used, and the terrible things they have said. So many people are angry at them & their horrible & disgusting actions!

If Democrats want to unite around the foul language & racist hatred spewed from the mouths and actions of these very unpopular & unrepresentative Congresswomen, it will be interesting to see how it plays out. I can tell you that they have made Israel feel abandoned by the U.S.

This all began Sunday when Trump tweeted, “Why don’t they go back and help fix the totally broken and crime infested places from which they came,” in an attempt to exploit the four congresswomen’s public tensions with House Speaker Nancy Pelosi. “These places need your help badly, you can’t leave fast enough,” he continued. “I’m sure that Nancy Pelosi would be very happy to quickly work out free travel arrangements!”

The presidential tweets sparked furious condemnation on the left, including from 2020 candidates. Pelosi said that the president’s words fit into his xenophobic, white supremacist agenda.

.@KamalaHarris on Trump’s tweet at women of color in Congress: “It is absolutely racist and un-American. And it is an old trope, go back to where you came from that, you know, you might hear it on the street but you should never hear that from the President of the United States.” pic.twitter.com/3dLYGUhvMJ

When @realDonaldTrump tells four American Congresswomen to go back to their countries, he reaffirms his plan to “Make America Great Again” has always been about making America white again.

Our diversity is our strength and our unity is our power. https://t.co/ODqqHneyES

British Prime Minister Theresa May’s office also weighed in on the controversy Monday morning, denouncing the tweets as “completely unacceptable.” The rare moment of criticism came amid worsening tensions between the two longtime allies after the British ambassador to the US was forced to resign after leaked cables revealed he had described Trump as inept.

Meanwhile, Republicans have been notably silent amid the fierce backlash. Rather than join in the general expressions of concern, Fox News hosts on Sunday attempted to downplay the presidential tirade by focusing on the tensions within the Democratic party and finding humor in the racist tweets.