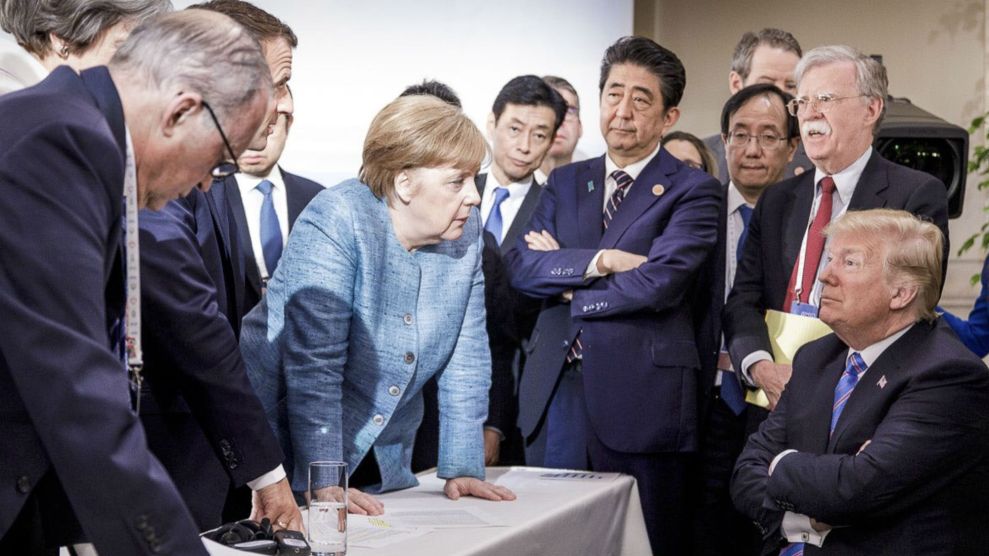 When the leaders of the world’s top advanced economies met last summer in Canada, pictures of the G-7 summit famously showed President Donald Trump at odds with his peers: arms crossed and glaring, while the other world leaders appeared to be arguing with him. Several leaders present joked that it was the G-6+1, because Trump was so uncooperative and distant from the group. But when the summit comes to the United States next summer, the attendees may find Trump unavoidable—and find themselves helping him line his pockets. According to Axios, Trump has narrowed the list of possible sites for the 2020 G-7 conference down to a few finalists, and the Trump National Doral golf club in Miami is on the list.

The selection makes sense, at least in terms of what would work best for Trump personally. Doral is an 800-acre resort that includes more than 600 hundred hotel rooms. Trump purchased the resort out of bankruptcy in 2012 for $150 million, borrowing $125 million from Deutsche Bank to pull off the acquisition. Trump has since refurbished the golf course, and while golfers generally have given the course positive reviews—it hosted an annual PGA tournament until 2016, when sponsor Cadillac pulled the plug and the tournament moved to a course in Mexico—its business has been suffering since Trump took office.

According to the Washington Post, the Trump Organization told local tax authorities that operating income at the resort dropped 69 percent between 2015 and 2017. “They are severely underperforming,” a tax consultant for the company told Miami tax officials, the Post reported. “There is some negative connotation that is associated with the brand.”

The summit is hosted by each participating world leader in turn—this year, it will be hosted by French President Emmanuel Macron in a seaside town in France. While the event is sometimes held in luxurious locations, there’s never been an instance when the host was also the financial beneficiary of the gathering of world leaders and their entourages. (Trump claims that his adult sons now manage the day-to-day operations of the Trump Organization, which runs Doral, but Trump has refused to give up ownership of any of his properties and continues to benefit financially from them.)

Siting the G-7 summit is tricky due to security concerns. In 2012, when Barack Obama hosted the summit, his original choice was Chicago—but, at least in part because of threats of protests, the summit was abruptly moved to Camp David, the presidential retreat in Maryland. Before the switch, planning the gathering for a crowded American urban area was shaping up to be a monumental undertaking. Chicago Mayor Rahm Emanuel sent thousands of police officers for crowd control training and lobbied for new city ordinances to maintain control during the event.

The host country of each year’s conference foots the bill, and last year’s G-7 conference in Canada cost Canadian taxpayers an estimated $450 million. (Most of that went to turning a remote luxury resort into a “fortified encampment.”) In 2017, the Italian government set aside more than $43 million just for the administrative costs, including hospitality, of hosting what it estimated would be 6,000 delegates and 4,000 journalists. Direct financial benefits aside, with thousands of journalists on hand, the G-7 would also make the Doral property the center of world attention for days.

Trump has previously brought several world leaders to Doral, including Japanese prime minister Shinzo Abe, who will be attending the 2020 conference, and Chinese leader Xi Jinping, who will not attend because China is not a member of the group. Both leaders stayed with Trump at his nearby Mar-a-Lago resort. But Trump’s unwillingness to close the resort to paying customers created a bizarre scene, as Abe and Trump reviewed details of the latest North Korean intelligence while club members gawked from their dinner tables several feet away.

The business brought by a world leader’s entourage has already been shown to be capable of helping Trump’s bottom line. In early 2018, after years of slipping business, investors in one of Trump’s New York hotels got good news: The first-quarter revenue for the hotel was up, largely because the hotel had booked the entourage of Saudi Crown Prince Mohammed bin Salman.