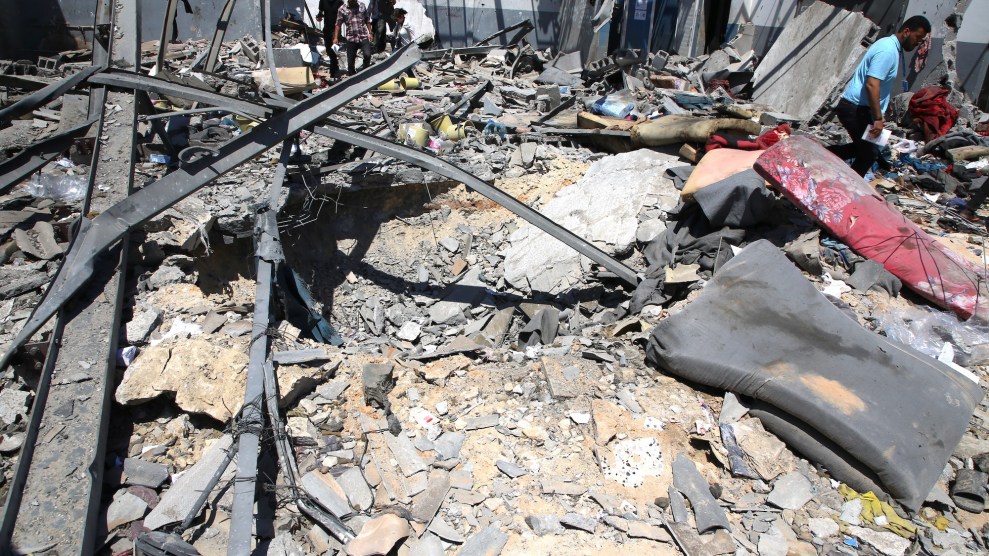 A migrant shelter hit by an airstrike near Tripoli, Libya on July 03, 2019.Hazem Turkia/Anadolu Agency/Getty Images

A Libyan warlord who has received rhetorical support from President Donald Trump is being blamed for the bombing of a detention center near Tripoli that killed at least 44 migrants Wednesday.

The warlord, Khalifa Haftar, whose Libyan National Army controls much eastern Libya, is attempting to oust the country’s UN-backed government, which blamed the attack on the Haftar’s forces. Though the LNA denied responsibly, the attack came just days after Haftar’s air force commander announced plans to intensify air raids around the Libyan capital.

The United Nations Support Mission in Libya said Wednesday that the attack left 130 people with severe injuries. The UN statement said the bombing was the second air attack on the facility, which hosted 600 undocumented migrants. The migrants are believed to come mostly from other African countries and likely hoped to reach Europe.

“This attack clearly could constitute a war crime, as it killed by surprise innocent people whose dire conditions forced them to be in that shelter,” the UN’s Libya envoy, Ghassan Salamé, said in a statement.

The UN linked the bombing to “allegations of extrajudicial killing in various places” in Libya and said it hoped to help “prosecute the perpetrators” in international courts. The statement did name Haftar, but his forces have been repeatedly accused of attacking civilians.

For years, the United States has supported a UN-led peace process in Libya and efforts by the so-called Government of National Accord in Tripoli. Trump roiled those efforts on April 15 by phoning Haftar—seemingly to offer backing for an offensive on Tripoli the warlord had launched weeks earlier. The White House said the men discussed “ongoing counterterrorism efforts” and “a shared vision for Libya’s transition to a stable, democratic political system.” According to an April Bloomberg report citing American officials, Trump indicated to Haftar that the United States supported his assault in Tripoli. The White House disputed that report.

Last week, Libyan government fighters found four American-made Javelin anti-tank missiles, apparently sold to the UAE in 2008, in a captured LNA base in the mountains south of Tripoli, the New York Times reported. The discovery bolstered reports that the Emirates, close US allies, are secretly arming Haftar’s forces. Such a transfer, which the UAE has denied, would violate a UN arms embargo and US law, Sen. Robert Menendez (D-N.J.), the top Democrat on the Senate Foreign Relations Committee, said in a letter sent Monday to the State Department.

“A number of our partners in the region, including the United Arab Emirates, have actively supported the LNA and General Haftar, who waged an incredibly destabilizing military offensive in April, undermining a fragile stability,” Menendez wrote.

Javelin missiles are among $8 billion in armaments that the State Department hopes to sell to the UAE and Saudi Arabia without congressional authorization after invoking a national emergency supposedly prompted by deteriorating relations with Iran. The Senate has voted to block the sales, but Trump is likely to veto that legislation.