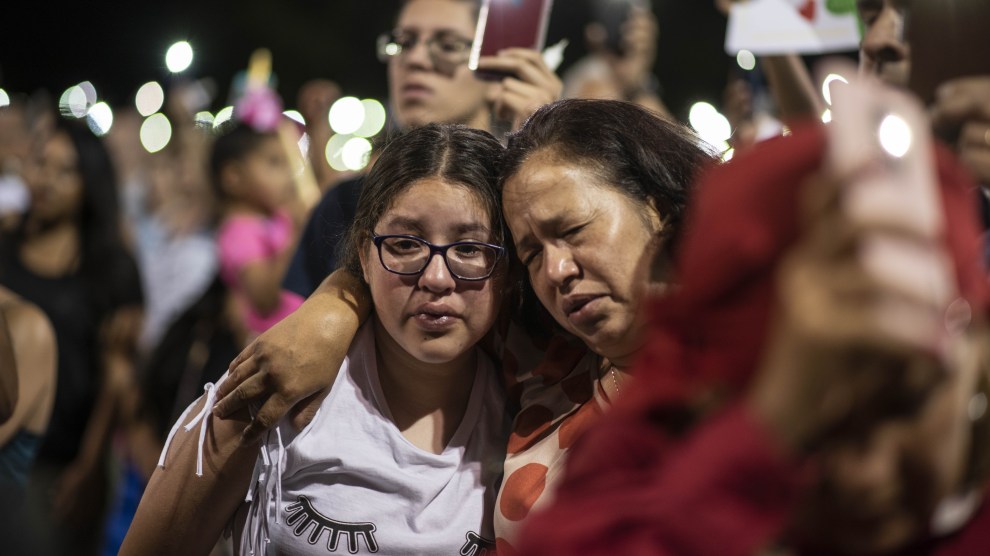 In the wake of twin tragedies that killed 31 people over the weekend, the Mother Jones Podcast visits El Paso, Texas, a community reeling from a mass shooting that left 22 people dead and 24 others injured. This week, host Jamilah King speaks to immigration reporter Fernanda Echavarri, who flew to El Paso on Monday and spent time at a makeshift memorial outside the Walmart targeted on Saturday by an anti-immigrant killer.

In El Paso, mourners are stunned that the shooter traveled 10 hours from his home in Allen, Texas, to attack a city on the Mexican border. Amid their grief and confusion, they come together in front of 22 white crosses to remember the victims, to hold each other, and to pray.

Diana Palaz, a co-worker of one of the victims, Leonardo Campos Jr., shares her memories of him. “He was a fine young man,” she tells Fernanda. “Hard-working, helpful, funny. He always made us laugh.”

Campos and his wife left the house in the morning to get their dog groomed. Both were killed in the attack.

Fernanda speaks to another woman, Colombian immigrant Cristina Zapata, who has seen firsthand the frequency with which mass shootings occur in the United States. Zapata says her cousin survived the Parkland shooting. Now this. “So that’s two family members that have been in a place where a mass shooting has happened.”

One woman, Rebecca Tenorio, drove from Albuquerque with her husband Frank to pray at the memorial. “We’ve lived a few years, and we see tragedy just heighten every year that we’re alive,” she says. “To us, the best way to join together is to hold each other, love each other, pray with each other, and allow each other to cry.”

The massacre hits close to home for Litzy Chavero, a political science student who grew up in El Paso. “It’s an attack on our people, not only to Mexican-Americans but to the American people,” she tells Echavarri. “Right now we’re powerless. There’s nothing we can do. Just vote on 2020. We need to change the president because if he’s in the White House, nothing’s gonna happen.”

For her, this is political. Unlike Texas Gov. Greg Abbott, who said “I think we need to focus more on memorials before we start the politics,” she is unafraid to talk about gun control and dangerous anti-immigrant rhetoric.

“How many more lives does it take for them to get gun control?” she says. “The main function of a government is to protect its people. We don’t have a government.”

Also in this episode, King speaks to reporter Ali Breland about the inspiration mass shooters derive from uncensored message boards in the darkest corners of the web. Breland, who covers online disinformation, explains the options for reforming the online spaces that law enforcement can’t control to prevent future white nationalists from taking their ideology to violent extremes.

Three recent mass shooters have posted hateful manifestos on a forum called 8chan prior to acting out their massacres, Breland explains. But, he notes, even though 8chan is closely associated with video game culture, President Donald Trump’s assertion that violent video games cause mass shootings is false.

“While it’s absolutely critical that something be done to make sure that the power of these websites be reduced and mitigated, these sorts of thoughts and ideologies are not born from the internet,” Breland says. “Making sure that structural white supremacy in the United States is not a force anymore is how you ultimately fix these types of issues.”

Listen to the full episode here: