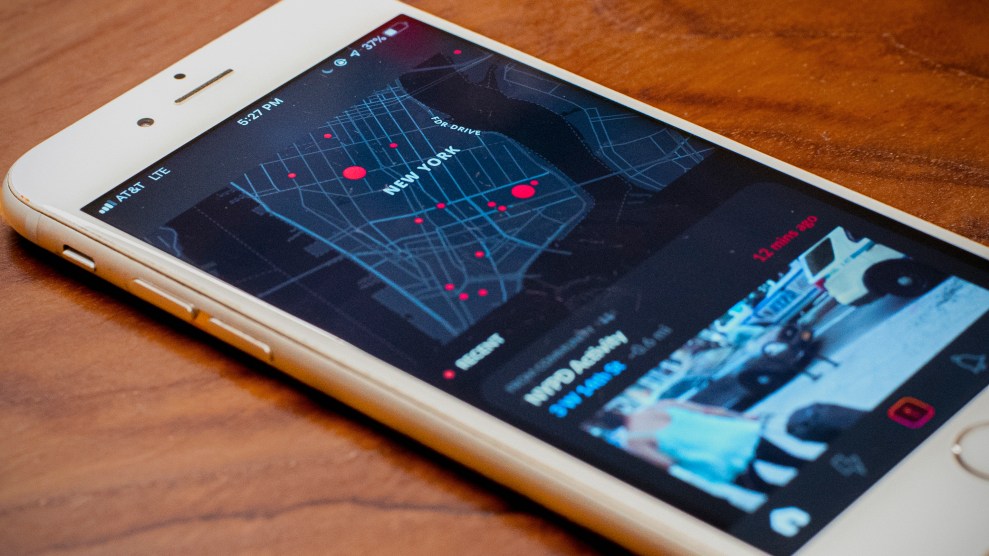 On a Monday in July, the phones of 16,800 New Yorkers near Chinatown lit up with a push notification reading, “Man Stabbed in Park.” Another 51,700 people were notified of a “Man Slashed” in the Bronx. On the Upper West Side, 13,500 people were alerted that a Chase Bank had been robbed.

The notifications, sent from a mobile app called Citizen, can create the impression that the city is teeming with errant slashers and other dangerous criminals. But crime rates in New York have been declining steadily for decades, according to the New York Police Department, with major felonies dropping by more than 80 percent between 1990 and 2018.

Citizen uses information from police scanners and social media to alert users to emergencies going on around them. While the app purports to make communities safer, experts say that constant notifications about local crime, sent to thousands of city dwellers multiple times a day, can actually create a culture of fear. What’s more, when people are unduly afraid of their neighborhoods, that paranoia is often misdirected at people of color.

Citizen, which has more than 25,000 ratings on Apple’s app store and 20,000 on Google Play, launched in 2017 after its predecessor, an app called Vigilante, was removed from the store in 2016 for promoting vigilantism, TechCrunch reported. A Medium post introducing Vigilante quotes a crime strategist as saying, “Rather than having a small, elite force of highly trained government agents here to protect us all, we’re much better off having average and ordinary citizens approaching this problem as a group and seeing what we can do.” This, along with an infographic showing one police officer for every 232 citizens in New York, seemed to encourage people to confront crimes themselves. The New York Police Department did not respond favorably, writing in an email to the Washington Post, “Crimes in progress should be handled by the NYPD and not a vigilante with a cell phone.”

Now, the app is back up and running in New York, San Francisco, Baltimore, Los Angeles, and Philadelphia, where it operates with a nearly identical layout and the stated mission “to keep people safe and informed.”

“It’s designed to gamify paranoia and convince its users that their cities are dangerous places, that are in constant need of surveillance.”

Users who have turned on push notifications receive alerts, often multiple times a day, about the most pressing nearby incidents, determined using geo-tracking data based on the locations of users’ phones. The app’s homepage shows a map of a user’s metro area where red dots correspond with the locations of incidents. Clicking on a dot (or a mobile push alert) brings up an incident page with details about the emergency and the number of people notified, a chatroom, and a “whoa” button users can click to express amazement. There’s also a “record” feature that lets users stream video of incidents happening near them. All together, the app gives users a mix of verified and crowdsourced information about neighborhood emergencies.

Most of the alerts are sourced from emergency radio traffic, in addition to social media and other sources, according to a company spokesperson. A team of analysts that includes former journalists and first responders decides which incidents go in the app, the Citizen spokesperson said, and unconfirmed reports are listed as such. Still, the dubious nature of radio traffic makes it reasonable to question the accuracy of Citizen’s alerts.

Mathew Ingram, Columbia Journalism Review’s chief digital writer, warned of relying on police scanners for information. “In the midst of an emergency, even the police, in most cases, have no clue what is actually happening,” Ingram says. “The things they’re saying on the scanner are their best attempt to kind of figure out what the hell is going on.”

Misinformation stemming from police scanners is most common during major emergencies. In the days-long manhunt following the Boston Marathon bombing in 2013, for example, tens of thousands of people followed along by listening to the police scanner. Some released dangerously false information on Twitter, including naming innocent people as suspects.

Police departments in some cities, such as Washington, DC, have begun encrypting scanner traffic to stem misinformation and prevent criminals from accessing information they could use to their advantage. But police scanners in the five metro areas Citizen covers remain open to the public for the sake of transparency.

While such an extreme level of misinformation has not plagued the Citizen app, any app that sources its information from radio traffic runs the risk of sharing misleading information. In one instance, an unconfirmed report on Citizen stated that one woman had thrown a brain at another woman. The projectile was actually a frame, not a brain. In another case, an unconfirmed report of a boy armed with a knife turned out to be false.

While the potential inaccuracies about local crime that users might encounter on the app may seem inconsequential, unconfirmed reports pulled from police and fire department radio transmissions can contribute to a community’s misguided sense of fear while centering that fear on certain types of crimes in certain neighborhoods.

In Citizen, this radio traffic information is repackaged with what Ángel Díaz, counsel in the Liberty and National Security Program at New York University’s Brennan Center for Justice, calls an “authoritative edge.” “What you’re really getting is unfiltered data that’s presented as if it’s authoritative, and it creates a culture of fear,” Díaz says. “It’s designed to gamify paranoia and convince its users that their cities are dangerous places, that are in constant need of surveillance.”

That feeling of unease is magnified by the massive volume of notifications the app sends out, which widens the existing divide between perception of crime and actual crime rates.

“People’s conceptions of crime are often pretty much out of pace with reality,” says Gary LaFree, a criminologist and chair of the Department of Criminology and Criminal Justice at the University of Maryland. He added that the United States is currently experiencing one of the lowest crime rate periods in the country’s history.

But low crime rates often aren’t enough to assuage the visceral fear people experience when they hear about brutal crimes happening around them—especially when the details of those statistically anomalous crimes are left to the imagination. Nicole Lindner downloaded Citizen because she wanted to know what was going on at a crime scene in front of her building in New York. The app said that a woman had been slashed, but there was no information about the victim’s condition. In the incident’s chat page, Lindner encountered conflicting reports.

“The thing with the users is that you’re not getting a true tale,” Lindner says. “Some people are saying, ‘Oh, she’s dead, rest in peace.’ Other people are like, ‘Oh, no, she’s fine, I saw her leave in an ambulance.'” (In that case, local news reported that the victim was treated with 40 stitches to her face at a local hospital.)

Lindner eventually stopped using the app because of the anxiety it induced, although she said she was more frightened by alerts about fires than those related to crime. “I don’t think I need to know all the kinds of things that are happening, all the times they’re happening,” she says.

It turns out that perception of crime can be a self-fulfilling prophecy. “You have people staying out of neighborhoods because they are afraid of crime,” LaFree says. “In fact, they are more dangerous when you don’t have a lot of people around.”

The idea that mass reporting on crime can cause unwarranted fear of crime is nothing new. But apps like Citizen—along with other crime reporting apps, like Amazon Ring’s Neighbors—disseminate that fear more quickly and frequently than other forms of technology, such as TV news. And that fear, unsurprisingly, is often misdirected at minorities.

“[Citizen] really has the potential for having people reinforce their existing fears and biases against who is seen as suspicious,” Díaz says. The chat section in the app is often rife with users making racially charged comments, which are especially common given the relative anonymity of users’ profiles. (The notifications themselves adhere to a policy of not naming a suspect’s race.)

Steven Renderos, co-director of MediaJustice, a communications rights organization, said that sourcing data from 911 calls can be especially detrimental to communities of color, who are more likely to be racially profiled as suspicious. “It’s not necessarily a reflection of an actual crime that is happening,” he says. “It’s merely someone’s bias or perception of something wrong that is happening in their neighborhood.”

“Our mission is to keep people safe and informed,” a Citizen spokesperson said by email in response to these concerns. “We believe that fighting racial biases in particular is a crucial part of this effort and seek to do so through the manner in which we filter and share information. Citizen’s analysts do not share descriptions of race except for in special circumstances when it is critical to keeping users safe and informed. These special circumstances include when there is a highly detailed description of a potential suspect or missing person.”

Citizen happily points out cases where the app has helped locate missing people or protected people from crime. And according to LaFree, having neighbors who look out for each other is one of the best ways to prevent crime.

But even without the apps, crime in the United States continues to fall. As Renderos points out, the app makes it difficult for users to take action against crime in a way that doesn’t cast suspicion on marginalized groups.

“If you happen to be someone who lives in a neighborhood where you think it is crime-ridden, it will reinforce that view,” Renderos says. “Everything around us is trying to reinforce the belief that crime is an issue, that it’s continuing to happen and growing, and that’s just not the case.”