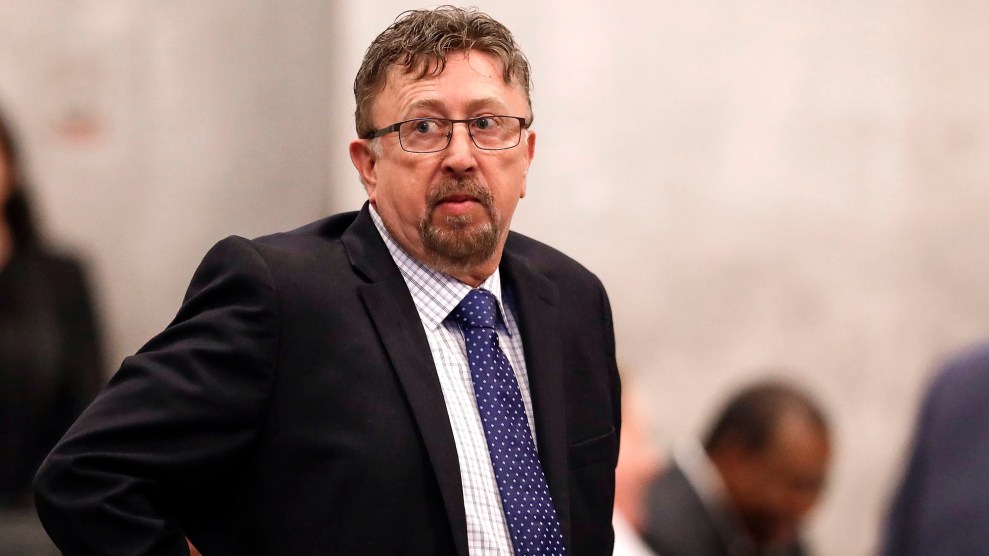 Rep. David Byrd (R-Waynesboro) attends a special session of the House of Representatives on Friday, Aug. 23, 2019, in Nashville, Tenn. The expulsion of Byrd, who's accused of sexual misconduct by three women nearly 30 years ago, was discussed during the session.Mark Humphrey/AP

Tennessee state Rep. David Byrd, who has been accused of sexual misconduct by three women who were underage at the time, quietly told his Republican colleagues in the state House that he would not seek reelection next year due to the controversy. In his comments, made during a closed-door caucus meeting, he also reportedly insisted he would not be stepping down.

I wrote about the case against Byrd late last year, not long after he had won election in a landslide, despite common knowledge of the allegations and a recorded conversation between him and one of his accusers in which he apologizes to her. (He does not specify what he is apologizing for in the recording.) Byrd did not respond to requests for comment when I was writing that story and, as I explained then, he “has not exactly denied the allegations against him; rather, he emphasizes repeatedly that they are from more than 30 years ago.”

As the Tennessean reported Friday:

Speaking to his colleagues, Byrd addressed the protests he has faced, which he said were led by out-of-state actors, while touting last year’s election results.

He criticized Enough is Enough, a political action committee that formed in 2018 that has focused its attention on Byrd this year, and the “liberal media.”

Byrd also gave a warning to his colleagues—if he were to be expelled or not seek reelection, his critics would win and could result in other GOP lawmakers being targeted.

During my investigation, I spoke with Christi Rice, who alleges that Byrd abused her over the course of her sophomore year when he was her high school basketball coach. Byrd apologizes to her in the recorded call. As she told me last year:

“Honestly, I don’t remember the very first time he touched me,” Rice says. “It was more that he talked about it: He wanted to see me naked, he told me he spent more hours with me in a day than he did his wife, that when he had sex with her he was thinking about me.”

Rice tells Mother Jones that she remembers Byrd leaving her what she calls IOUs, that insinuated she owed him a sexual quid pro quo. The first came the morning after a late-night basketball game that prevented her from being prepared for a surprise biology test the next morning. Byrd, who was also Rice’s biology teacher, told her she didn’t need to worry when she fretted to him about her potential score. When the test landed on her desk, she said, the answers were already filled in. Shortly thereafter, she received the first IOU, signed with his initials, “DAB.” For weeks, he teased her, saying she owed him, but he hadn’t decided precisely what her payment would be. Eventually, he told her: Rice was to disrobe in the girls’ locker room after her teammates had gone home so he could “accidentally” walk in on her. The second, Rice says he told her, was for her to unbutton her shirt and lean over in front of him, pressing her breasts together.

The third he inscribed as a note in her yearbook. It reads, “You are one of the hardest working players I have ever coach [sic]. You have finally got a personality that I think fits you to a ‘T.’ Be good and work hard and I’ll bet you get that scholarship. Good luck.”

Rice says he told her it was for sex.

I also spoke at length with Robbie Cain, who was on the basketball team with Rice. She has a similar account:

She adds that as a player, she struggled with pain in her ankles. On occasions when the pain was overwhelming, Byrd would carry her into the basement of the high school, where he would instruct her to take off her pants and get into a hot tub, he told her, to ease her ankle pain.

Cain, in searing detail, also recalls that particular night reported by WSMV at the Sheraton Hotel in downtown Nashville—”I’ll never forget it in my life,” she says. The girls’ basketball team was staying there, and she went with her teammates into the pool for a swim. She says Byrd joined them, but one by one, the other girls left the pool, until it was just her, alone with her coach.

“The next thing I know, he’s got me over on the side of the pool, and he’s telling me he wants me to reach down and touch him between his legs because he wants me to feel how I make him feel—he kept telling me how it’s throbbing,” Cain tells Mother Jones. “I was like, ‘No, no, no.’ I just remember screaming, ‘No,’ and getting out of that pool.”

In the lead-up to last November’s election, the PAC Enough is Enough campaigned against Byrd’s election, but he still won reelection with nearly 78 percent of the vote. Still, things seem to have shifted for Byrd during this term in the legislature. Rep. Gloria Johnson, a Democrat from Knoxville, has been leading efforts to oust him from office. Most recently, the legislature met for a special session this summer that was called in part to elect a new speaker. (The former speaker, Rep. Glen Casada—one of Byrd’s most vocal defenders in the statehouse—had been forced to resign after sexually explicit, misogynistic text messages surfaced between Casada and his chief of staff, Cade Cothren.) During that session, Johnson filed an expulsion resolution that sought to push Byrd from his seat. The chair of the House Judiciary Committee made a motion to refer that resolution to his committee “as quickly as the speaker will allow” to hear testimony under oath from Byrd and his accusers. As the Tennessean reports, “because the statute of limitations has passed on the allegations against Byrd, a judiciary hearing is essentially the only remaining way subpoenas could be issued against Byrd to compel testimony.”

Johnson recently told Mother Jones that Sexton’s request wouldn’t likely be effective in furthering Byrd’s ouster, because it only focuses on this legislator’s past conduct. In contrast, she says, “my resolution goes to everything really that surrounds this—so there’s the crime that happened 30-plus years ago, but there’s also a continuation of the crime through the cover-up, and he has participated in this cover-up while he’s been in session; there’s no question,” she says. During Byrd’s reelection campaign last year, ads were run by a PAC affiliated with Casada that compared Byrd to Supreme Court Justice Brett Kavanaugh and President Donald Trump, both of whom have been accused of sexual assault, and decried the accusations as “lies and fake news” propagated by liberals.

Those who have been protesting Byrd’s presence in the capitol are unlikely to cease their calls for his expulsion in the wake of this news. Rice, for her part, has been tweeting that she will participate in any investigation should the Judiciary Committee move forward.

After today’s vote we know who sides with alleged child molester #DavidByrd rather than survivors.