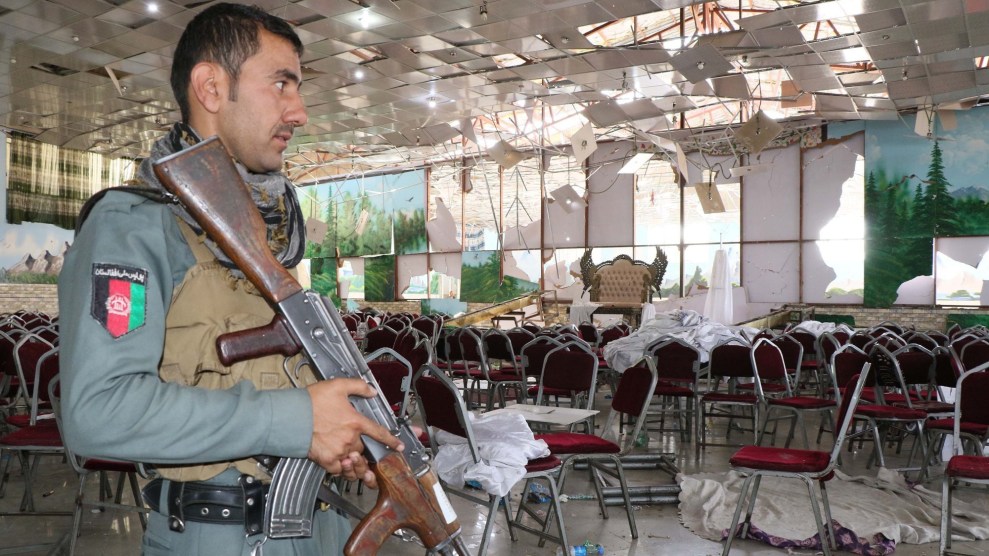 An all-too-frequent tragedy struck Afghanistan this past Saturday when a suicide bomber affiliated with the Islamic State entered a crowded wedding hall in west Kabul and blew himself up, killing more than 60 people.

The horrific attack plunged Afghanistan’s capital city into mourning during an especially crucial period of negotiations between the United States and the Taliban over when to withdraw US troops from the country. Zalmay Khalilzad, the top US negotiator, has said he is hoping for a deal by September 1—even as the Taliban has kept up its attacks on Afghan security forces, which receive support from the roughly 14,000 US troops still in the country. With the tentative deal under fire from Donald Trump’s Republican allies in Congress, and the Taliban’s willingness to maintain a ceasefire in serious doubt, an attack by the Islamic State’s affiliate in Afghanistan, known as IS-K, has only empowered the potential deal’s critics—mostly hawkish Republicans and retired military leaders—who believe IS-K will flourish without an American presence in the region.

Soon after the attack, IS-K became the subject of several news stories in the American press that warned of the group’s resurgence, including a Washington Post article that called IS-K a “major threat.” Experts are far from unanimous on this point, and as recently as August 2, intelligence officials told the New York Times that they only see IS-K as “a regional problem” and “more of a threat to the Taliban than to the West.” Both IS-K and the Taliban recruit radical Sunni fighters and oppose the Afghan government, but they consider each other rivals and have fought repeatedly.

The problem of how to characterize IS-K is not a new one. After forming in eastern Afghanistan in 2015, it has grown substantially—from roughly 700 fighters as of October 2018 to more than 2,500 as of last month—but is still only a fraction of the Taliban’s size. “The Islamic State is really a third tier threat within Afghanistan,” Bill Roggio, editor of the Long War Journal at the Foundation for Defense of Democracies, told me. “Every time they’ve met on the battlefield, the Taliban has come out ahead.”

The Taliban, al-Qaeda, and their allied groups still dominate the landscape of extremist groups in Afghanistan, but IS-K has endured as a perennial distraction for the US military, which has been unable to successfully eradicate it despite several targeted missions. When the Pentagon dropped the so-called “Mother of All Bombs” three months into Trump’s term, it was with the intention of destroying a tunnel network IS-K fighters had used for transportation in their ongoing clash with Afghan security forces. That bomb evidently failed to live up to its name. Eight months later, the Atlantic published a story with the headline, “ISIS in Afghanistan Is Like a Balloon That Won’t Pop.”

“The Islamic State is really a third tier threat within Afghanistan.”

IS-K is not a party to Khalilzad’s planned peace agreement—nor, for that matter, is the Afghan government—but the draft he submitted to Trump last week would require the Taliban to cut ties with al-Qaeda. The deal includes a commitment from the Taliban to begin negotiating directly with Afghan leaders, but “it is not clear how firmly” that commitment is spelled out, the Washington Post reported. With that possible, if still unlikely, deal on the horizon, IS-K has shifted into focus as a core concern for the Afghan military and its American advisors. “The IS-K poses a serious threat to Afghanistan and the world, and it needs an international consensus,” a spokesperson for the Afghan National Security Council said Tuesday. A Pentagon report submitted to Congress that same day reached a similar conclusion, finding that IS-K “will remain an enduring threat in Afghanistan, even if the Afghan government and the Taliban reach a political settlement.”

The problem of how to qualify the IS-K threat has a political component too, as the 2020 presidential campaign has forced candidates to stake out when they plan to end America’s 18-year war in Afghanistan. Two Democratic presidential hopefuls, South Bend Mayor Pete Buttigieg and Rep. Tulsi Gabbard (D-Hawaii), have already pledged to remove all US troops from Afghanistan within a year of taking office. Several other candidates, such as Sen. Elizabeth Warren (D-Mass.) and former Rep. Beto O’Rourke (D-Texas), have stuck to an ambitious, if less precise, timeline for withdrawal.

The Trump administration’s own timeline is much less clear. Secretary of State Mike Pompeo said last month that he received instructions from Trump to reduce US troop figures there before the 2020 election, but one day later, Pompeo backtracked and said the US will withdraw troops “just as quickly as we can get there.”

“It’s complicated,” Pompeo told CBS News this past Sunday. “There’s certainly places where ISIS is more powerful today than they were three or four years ago. But the caliphate is gone, and their capacity to conduct external attacks has been made much more difficult.”

David Petraeus, the retired Army general who oversaw US forces in Afghanistan and Iraq, bashed the prospect of a speedy withdrawal earlier this month in a scathing Wall Street Journal op-ed that hinted at wider Republican frustration with Trump’s negotiating strategy. “The cost of retaining a few thousand troops in Afghanistan pales in comparison with the price the nation will pay, strategically and economically, if al-Qaeda or ISIS rebuilds a terrorist platform there,” he wrote in a piece co-written with Vance Serchuk, a senior fellow at the Center for a New American Security. Petraeus picked a fortuitous time to forecast the return of the Islamic State. In Syria and Iraq, ISIS fighters have increasingly occupied the attention of a smaller group of US forces left in place since President Donald Trump declared victory over the group and began withdrawing forces in December.

Rep. Liz Cheney (R-Wyo.), the third-ranking Republican in the House (and daughter of one of the war’s architects, former Vice President Dick Cheney), called Petraeus’ piece a “must read” and reflected its argument in her own op-ed, published Tuesday in the Washington Post, in which she urged Trump to not “withdraw US forces based on a political timetable that grants concessions to the Taliban and allows the terrorists to maintain safe havens from which they can plan and train for future attacks in the West.” Trump on Tuesday indicated that he plans to not order a full withdrawal, telling reporters the US is “bringing some of our troops back but we have to have a presence,” given that the area “does seem to be the Harvard University of terrorism.”

Petraeus’ argument went over less well with advocacy groups like the right-leaning Concerned Veterans for America, which recently teamed up with VoteVets, its left-leaning counterpart, to criticize America’s “endless wars.” Dan Caldwell, senior adviser to CV4A, called it “pathetic” in a Twitter post. “The authors can offer no alternative to the strategy of just muddling along with more lives lost and billions more spent because every thing else has failed,” he added.

Then there’s the matter of how seriously to weigh this latest attack. IS-K bombings at Kabul cultural centers and mosques are not new, even though Saturday’s wedding hall massacre was more deadly than any other this year. “They’re fighting for their share of the limelight,” Roggio says. “They want to show they’re relevant.”