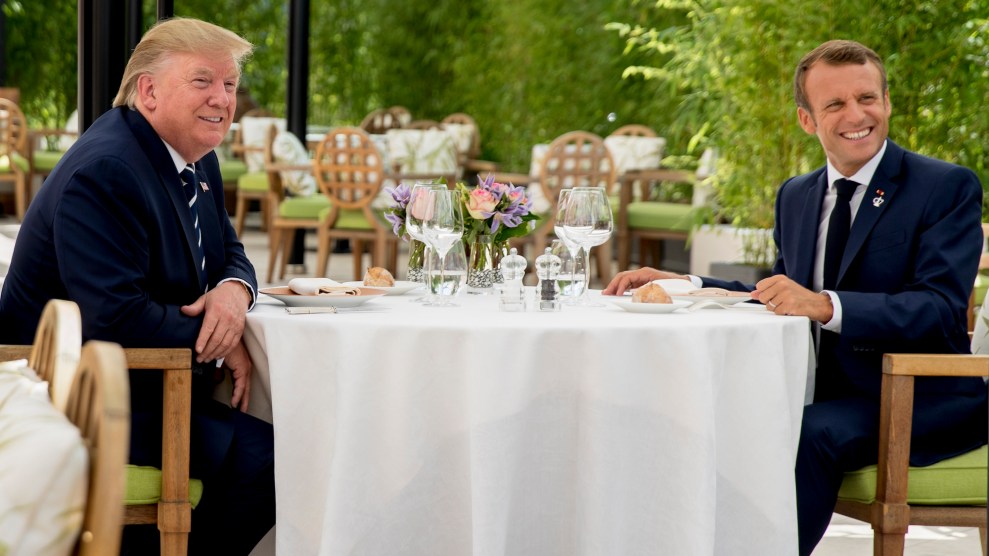 President Donald Trump has reportedly been complaining up a storm about having to represent the United States at this week’s meeting of the G7 in Biarritz, France. It’s hard to blame him, really. He hates it when he can’t sleep in his own bed or at one of his own resorts. Plus the Europeans don’t like him very much. He was greeted upon arrival by French President Emmanuel Macron, who pestered him at an impromptu lunch about climate change and other issues, such as inequality, that Trump doesn’t care about. And Donald Tusk, the president of the European Council, which represents the 28 members of the European Union, kicked off the week’s meetings by taking Trump to task for his repeated insistence that the G7 invite Russia to rejoin the group of world economic powers.

The group expelled Russia in 2014 after it invaded Ukraine and annexed the Crimea Peninsula. Russia continues to support anti-Kiev rebels fighting the Ukrainian government. Trump has blamed President Barack Obama for Russia’s expulsion, and he apparently believes the invasion of Crimea was justified because people who live there speak Russian.

Trump said on Tuesday that he believed it is “much more appropriate to have Russia in” the G7 meetings than out because “a lot of the things we talk about have to do with Russia.” The comments prompted Tusk to make a public statement Saturday throwing cold water on the idea of Russia rejoining the group.

G7 News: Donald Tusk, President of the European Council, announces that “under no condition” will the EU agree to Trump’s suggestion to invite Russia back into the G7. In fact, Ukraine may be invited as a guest to next year’s summit. #G7Biarritz #G7Summit pic.twitter.com/e2iL6v1Sq8

“One year ago, in Canada, President Trump suggested reinviting Russia to G7, stating openly that Crimea’s annexation by Russia was partially justified and that we should accept this fact,” Tusk said. “Under no condition can we agree with this logic.” Officials from Germany, France, and the United Kingdom made similar comments earlier in the week.

Tusk went on to explain: “When Russia was invited to G7 for the first time, it was believed that it would pursue the path of liberal democracy, rule of law, and human rights. Is there anyone among us, who can say with full conviction, not out of business calculation, that Russia is on that path?”

Instead, Tusk, who is Polish, suggested that next year, “it would be better to invite Ukraine.”