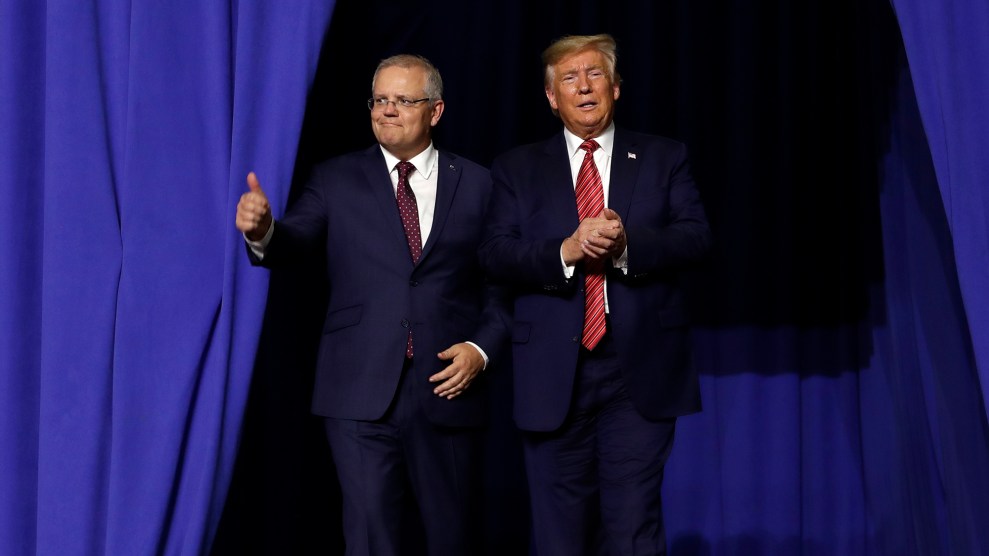 Australia rarely makes the US news unless there’s a killer shark attack or a killer leadership coup. But like so many others in the Trump era, this week is not normal.

The New York Times reported Monday afternoon that President Donald Trump pushed Australia’s Prime Minister Scott Morrison “during a recent telephone call” to help prosecute his political vendetta against the people he thinks started the Trump-Russia investigation. That’s a big deal. Trump and other US officials, including Attorney General William Barr, appear to be trying to recruit all sorts of governments (Italy, the UK, and, of course, Ukraine) to do the same—and in some cases, they are covering their tracks by stashing unsavory conversations in a super-classified White House server.

Watchers of the far-right conspiracy machine know Australia plays a special role in sparking Trump’s anger. You might recall it was an Australian official, Alexander Downer, who sort of put this whole thing in motion. During a “night of heavy drinking” with Trump campaign adviser George Papadopoulos in a London bar in May 2016, Downer, Australia’s top diplomat in Britain at the time, learned some juicy gossip that the Aussies eventually passed onto the US: Papadopoulos had been told that Russia had dirt on Hillary Clinton in the form of her emails. That bar-chatter, when it reached Washington in July 2016, sparked the FBI investigation of the Trump campaign’s interactions with Russia, which the following year morphed into the Mueller inquiry.

For some time now, Trump-defending conspiracy-mongers have assailed Alexander Downer as some kind of Clinton stooge, doing the bidding of dark, anti-Trump forces. For Australians, this is hilarious.

For some time now, Trump-defending conspiracy-mongers have assailed Downer as some kind of Clinton stooge, doing the bidding of dark, anti-Trump forces. That is, Downer, in cahoots with the Deep State, passed along this information to orchestrate the Russia probe in order prevent Trump from becoming president.

For Australians, this is hilarious: Downer is a lifelong soldier of conservative Australia, and happily so. He’s a former foreign minister in Australia’s conservative party, confusingly called the Liberal Party, and once led the party when it was in opposition. The thought of Downer in league with some kind of liberal, global deep state is fantastical enough to be instantly discounted. Nonetheless, in one example of how this disinformation was concocted and spread, The Hill ran a story in March 2018—co-bylined by John Solomon of whistleblower-complaint fame—highlighting Downer’s work to help end the scourge of HIV in the region. This effort, it reported, included awarding taxpayer money to the Clinton Foundation in 2006, and was painted as nefarious. Fox News picked it up. Papadopoulos himself has waged a long Twitter war against Downer:

I have been right about Downer from the beginning. A wannabe spy and Clinton errand boy who is about to get exposed on the world stage. Great reporting, NYTs! Mifsud is next.

Prime Minister Morrison just last week stood in front of the White House beaming as the president lavished him with the pomp and ceremony of a rare official state visit, only the second of Trump’s presidency. Morrison praised the “amity” between the two countries; Trump, the “unwavering friendship.” It was the kind of diplomatic theater any Aussie PM relishes: wall-to-wall coverage back home, with enough red meat to keep Rupert Murdoch happy.

And it now appears that jolly commitment extends to doing Trump’s dirty work. Not long after the Times broke its story about the Trump-Morrison phone call, Australian reporter Kerrie Yaxley confirmed Morrison was fully onboard with Trump’s hijinks—and published the letter written by the Australian ambassador to the US, Joe Hockey, to Barr, pledging that “Australia will use its best endeavours [sic] to support your efforts in this matter.” Important to note here is the date: May 28, 2019, long before the “recent” phone call reported in the Times on Monday.

“While Australia’s former high commissioner to the United Kingdom, the Hon. Alexander Downer, is no longer employed by the government, we stand ready to provide you with all the relevant information to support your inquiries,” the letter reads.

Could it be possible that the Australian government will throw its stalwart party veteran and ally, Alexander Downer, under the bus to please Trump? It’s difficult to imagine. But no doubt we’ll learn more about what this US-Australian cooperation actually entails as the House Democrats’ push to impeach gathers speed.

In the meantime, Australia’s dedicated political press gang is busy piecing this timeline together in real time, while extracting information from a likely very stunned prime minister’s office.

Two bits of interesting coverage to point out immediately: Don’t miss BuzzFeed‘s attempt to extract the original intel outlining what Downer got from Papadopoulos in that London bar. (TL;DR: They weren’t successful in prizing the full document from the government, showing just how far the Australians will go to protect their relationship with the US.)

And a reminder, @MarkDiStef's account of how @BuzzFeedNews has been suing for the original, unredacted account of the Papadopolous affair from the Australian government… without any luck (this, from June) https://t.co/MniiSfqMNZ pic.twitter.com/tiuHqximbO

And finally, check out the interview Downer was forced to do on Australian radio on Monday, just as this news was breaking. He happened to be pre-booked this morning. Give that producer a raise.