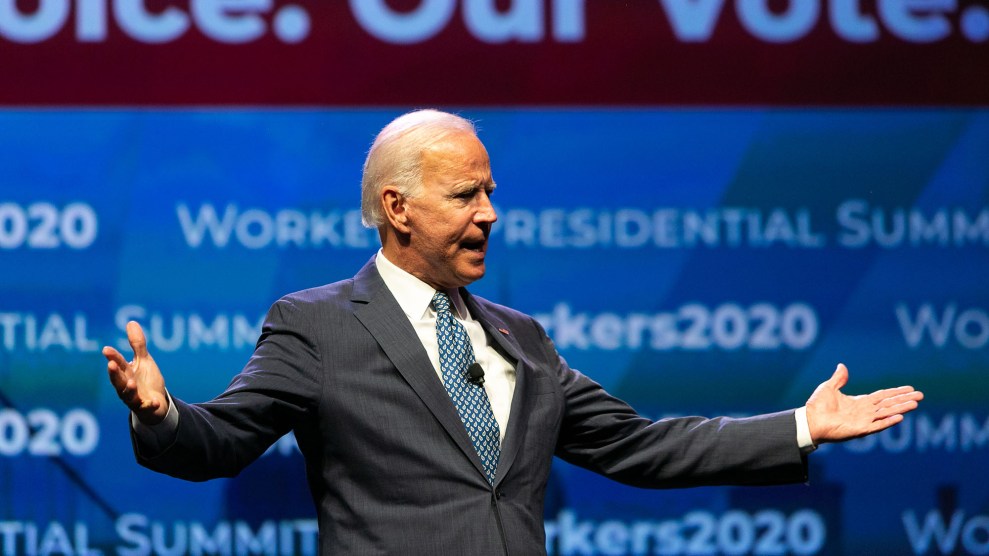 Joe Biden scolded the media on Saturday for focusing on President Donald Trump’s unfounded allegations about connections to his son’s work in Ukraine rather than the major scandal of the day: that Trump appears to have abused his powers in order to coerce a foreign government to dig up dirt on his political opponent.

Biden’s comments came after Fox News reporter Peter Doocy asked the former vice president how many times he had spoken to his son about his overseas business dealings. Biden responded that he never had. Doocy’s question is about the faux-scandal that President Donald Trump is trying to drum up and is reportedly part of a whistleblower complaint in the Intelligence Community. According to news accounts, Trump has been pressuring the president of Ukraine to investigate Biden and his son, Hunter.

“You should be looking at Trump,” Biden continued. “Everybody looked at this and everybody who’s looked at it said there’s nothing there. Ask the right question.”

Biden said he would wait for the House’s investigation to make a judgement on whether Trump should be impeached. But other candidates have gone further, renewing calls for impeachment in light of his apparent abuse of power to go after Biden.

.@BetoORourke to us on whistleblower/DNI: “What is Congress waiting for?! This is crazy. Either we are a nation of laws or we are not. And the precedent that Congress is setting is that this president is somehow above the law.” pic.twitter.com/DggDsvpkLi

A president is sitting in the Oval Office, right now, who continues to commit crimes. He continues because he knows his Justice Department won't act and believes Congress won’t either. Today’s news confirmed he thinks he’s above the law. If we do nothing, he’ll be right.

“I know what I’m up against,” Biden told reporters. “A serial abuser. That’s what this guy is. He abuses power any way he can. This crosses the line.”