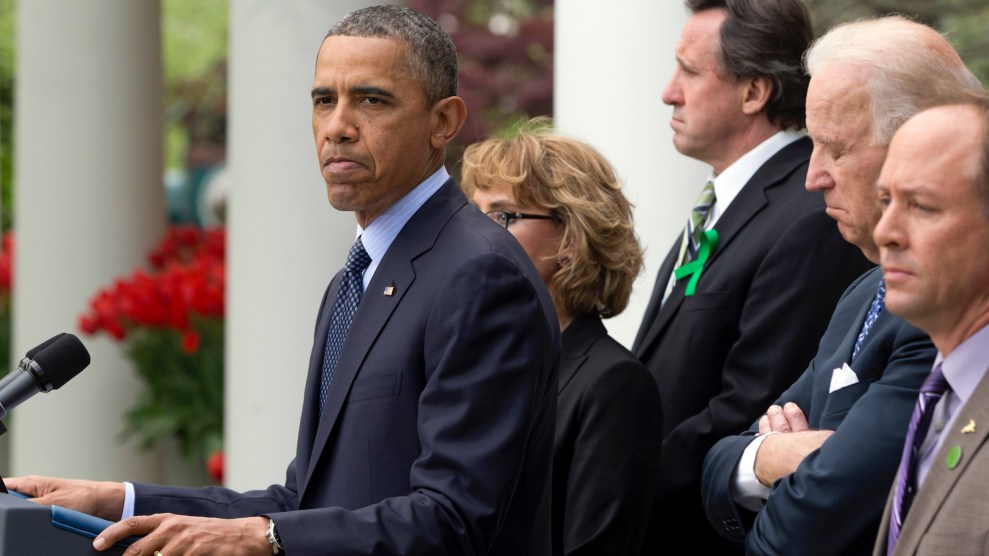 President Barack Obama speaks in 2013 after a bill to expand background checks for gun-buyers was defeated in the Senate.Jacquelyn Martin/AP

Beto O’Rourke reshaped the national gun debate when, in response to a string of deadly mass shootings, he called for a mandatory buyback of the military-style assault weapons used in the massacres. “Hell yes, we’re going to take your AR-15, your AK-47,” he said during last week’s debate. “We’re not going to allow it to be used against our fellow Americans anymore.”

Gun rights advocates were enraged; one right-wing Texas lawmaker responded with what appeared to be a death threat. Even some Democrats—who for years had assured voters that no one wants to confiscate their weapons—worried that O’Rourke had gone too far. “I frankly think that that clip will be played for years at Second Amendment rallies with organizations that try to scare people by saying Democrats are coming for your guns,” Sen. Chris Coons (D-Del.) told CNN on Friday. Pennsylvania Sen. Pat Toomey—one of the few Republican supporters of gun control on Capitol Hill—agreed. He suggested O’Rourke’s comments could complicate negotiations to close loopholes that allow many gun-buyers to avoid being screened for mental health concerns and criminal records when they purchase firearms from private sellers. “This rhetoric undermines and hurts bipartisan efforts to actually make progress on commonsense gun safety efforts, like expanding background checks,” he tweeted.

But according to some veterans of past legislative fights over background checks, unapologetic attempts to push the gun control envelope are exactly what is needed. “Nobody who ever got half a loaf asked for half a loaf,” says Mark Glaze, who served as the executive director of Mayors Against Illegal Guns—now called Everytown for Gun Safety—at the time of the 2012 Sandy Hook Elementary School shooting. “If we really wanted universal background checks, we’d be talking about an assault weapons ban. If we really wanted an assault weapons ban, we would be talking about a constitutional amendment.”

In the wake of Sandy Hook, Glaze says, he attempted to plant a story that Senate Democrats and gun control groups were working on an assault weapons ban—when the real goal was a modest measure sponsored by Toomey and Sen. Joe Manchin (D-W.V.) that would have expanded background checks to cover more, but not all, purchases. The bill, which had overwhelming public support, was ultimately blocked by Republican senators (and a few Democrats) in April 2013.

For the first time since Manchin-Toomey’s spectacular failure, Congress and the White House may be ready to do something about the problem. Democrats are largely united behind a universal background checks bill passed earlier this year by the House, and Senate Majority Leader Mitch McConnell (R-Ky.) says he’ll hold a vote on anything President Donald Trump signals he’ll support. For his part, Trump has said that background checks are on the table, though he seems to be pushing for something short of universal checks. Manchin and Toomey—as well as Sen. Chris Murphy (D-Conn.), one of the Senate’s most vocal gun control advocates—have been in conversations with the White House, hoping to get the president to back a compromise measure that would expand background checks for sales at gun shows and online. Negotiations have dragged on for more than a month amid a furious lobbying campaign from the National Rifle Association and its allies.

There were multiple factors that doomed Manchin-Toomey in 2013, including the strength of the gun lobby and the lack of expertise on the issue in Democratic circles. But seven gun control advocates and former Hill staffers involved in negotiations over the measure told me that the laser-like focus on a popular but fairly unambitious background check bill was a strategic mistake. “To this day, I’m convinced that when we make background checks our first priority, the NRA screams in public and privately lights up cigars,” Glaze says. “We’ve got this decades-long fight to achieve a 90-percent issue. When we finally beat the NRA on passage, which we will, the NRA will lose nothing, but they will have held off our movement for decades.”

Sandy Hook had all the makings of a political tipping point. After two decades of avoiding gun debates at all costs, Democrats were suddenly energized around the issue. Nancy Pelosi (D-Calif.), then the House minority leader, convened weekly conference calls with gun control advocates. Vice President Joe Biden, deputized by President Barack Obama to lead the White House’s response, convened a group of experts to put together a background checks bill, the movement’s top priority.

But the real deal-making was happening elsewhere. Manchin, a moderate Democrat with an A-rating from the NRA, mobilized his staff to begin drafting legislation. The senator had been devastated by Sandy Hook, recalls Jan Brunner, a former Manchin staffer who worked on the measure. “He was always so pro-NRA, and all of a sudden, he’s sitting there crying, ‘Nobody kills babies—they killed babies,’” she says.

“When we make background checks our first priority, the NRA screams in public and privately lights up cigars.”

Manchin’s staff teamed up with Glaze and staffers for Sen. Chuck Schumer (D-N.Y.) The idea was to craft a background checks bill that could pass the Senate with enough Republican votes to be compelling to the GOP-held House. The effort culminated in a secret meeting in early 2013 between Glaze, John Feinblatt—then a top aide to Michael Bloomberg, now the president of Everytown—and a prominent gun industry lawyer at Manhattan’s Odeon restaurant. The trio discussed sweeteners that could be added to the bill to win over the NRA and the National Shooting Sports Foundation, which represents the interests of gun sellers and manufacturers.

“The reason [the gun industry lawyer] did this was because the industry was scared shitless,” Glaze recalls. “They thought Sandy Hook was so catastrophic that unless they gave somewhere, they were just done in the eyes of the public.” Glaze hoped that by floating a ban on assault weapons—among the industry’s most profitable products—advocates could pressure the gun lobby into agreeing to expanded background checks instead.

That conversation produced the Manchin-Toomey measure, which was far from comprehensive. It would have required a background check for most commercial sales—including any firearm purchased at a gun show or through a print or online advertisement—but other private sales and transfers would still have been permitted without a background check. It also contained concessions for the industry, such as making it easier to sell and transport certain firearms across state lines. For a time, things looked promising: The NSSF appeared ready to back the bill, as did influential conservative Sen. Tom Coburn (R-Okla.), whose state was home to one of the nation’s biggest gun shows.

But the negotiations with Coburn and the gun lobby wore on for months. Coburn ultimately demanded that the newly instituted background checks not be recorded, a proposal that the bill’s authors rejected. In the end, Toomey was the only Republican willing to sponsor the bill, and by that point, much of the political pressure created by Sandy Hook had dissipated. “Delay was the NRA’s friend, and it almost certainly wasn’t accidental,” Glaze says. “We waited too long, possibly because the NRA dragged us there.”

And because the Manchin-Toomey measure failed, it set the movement up to ask for too little in future negotiations, says Arkadi Gerney, who worked on gun issues at the Center of American Progress at the time. It would have been better, he says, to have voted on a universal background checks bill that didn’t include a raft of exceptions. “That might have gotten only 48 or 49 votes in the Senate, but it would have been better in hindsight,” he argues.

It’s been more than six weeks since the tragedies in El Paso and Dayton, and it’s still not clear how committed Trump might be to background checks. But Democratic leaders seem to have internalized at least some of the lessons of 2013. “We made it clear to the president that any proposal he endorses that does not include the House-passed universal background checks legislation will not get the job done,” Pelosi and Schumer said in a joint statement Sunday.

Gerney thinks that’s a wise strategy—one that O’Rourke and his rivals have also taken to heart. “The Democrats running for president do not want to pass a weak bill or just a red flag bill,” he says. “They want to keep this issue in the news, take it to the election, win the White House and Senate, blow up the filibuster, and then they can do a universal background checks bill, and assault weapons ban—all of it.”