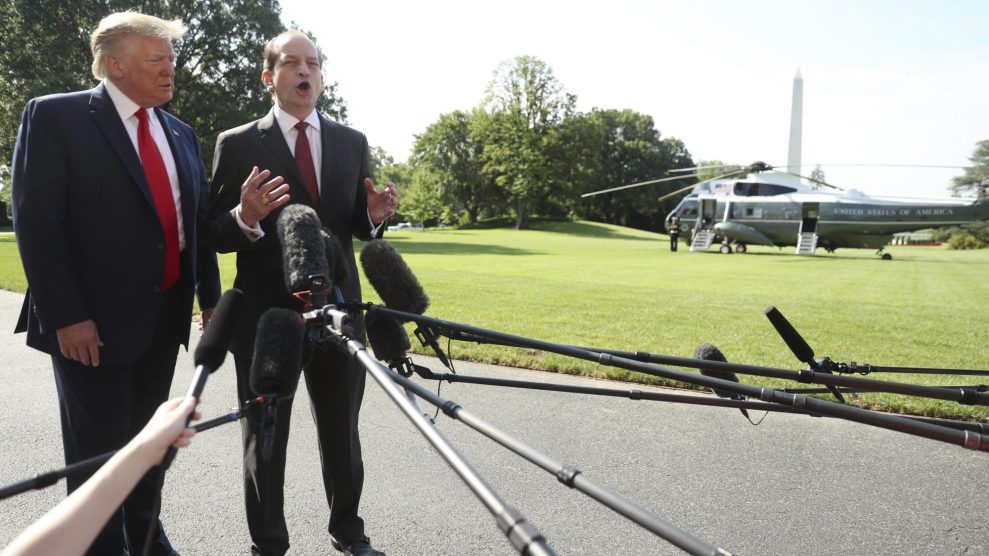 Labor Secretary Alex Acosta stepped down July 12 amid criticism of his handling of the Jeffrey Epstein case. AP Photo/Andrew Harnik

But not limited to: It was just a four-word phrase, a bit of plain contractual verbiage, but even now, more than a decade later, Spencer Kuvin has a hard time expressing just how bizarre it was. “It’s incredibly odd language,” said Kuvin, an attorney in Florida. “I’ve never seen it before in a non-prosecution agreement.”

Kuvin and I were talking about the infamous and inexplicable 2007 plea deal offered by then–US Attorney Alexander Acosta, last seen slinking out of the Labor Department’s back door. Kuvin had represented three of Epstein’s victims at the time of the agreement, and Kuvin is still exercised about the deal, in particular its brief immunity clause that continues to protect Epstein’s co-conspirators.

According to a ruling by US District Judge Kenneth Marra in February 2019, “from between about 1999 and 2007, Jeffrey Epstein sexually abused more than 30 minor girls…at his mansion in Palm Beach, Florida, and elsewhere in the United States and overseas.” The ruling goes on to describe a child sex ring: “In addition to his own sexual abuse of the victims, Epstein directed other persons to abuse the girls sexually. Epstein used paid employees to find and bring minor girls to him. Epstein worked in concert with others to obtain minors not only for his own sexual gratification, but also for the sexual gratification of others.”

But back in 2007, Epstein was charged only with procuring an underage girl for prostitution, having struck an unbelievable sweetheart deal with Acosta. Epstein served 13 months in a Palm Beach County jail, of which six days a week were spent on work release in his high-rise office, a limo chauffeuring him to and from jail. He was also required to register as a sex offender.

The deal on its face is incredibly favorable to Epstein. If you look closer, things get even better for him:

The United States also agrees that it will not institute any criminal charges against any potential co-conspirators of Epstein, including but not limited to Sarah Kellen, Adriana Ross, Lesley Groff, or Nadia Marcinkova.

How could the government agree to immunize “any potential co-conspirators” of an alleged serial child rapist? The question is at the center of so many conspiracy theories surrounding Epstein’s life and death.

“You’re telling me there’s evidence that you have a serial molester of underage girls and that allowing him one year in a local jail on work release every day is a reasonable deal? That’s absurd.”

The deal has not expired with Epstein, either. On September 16, Judge Marra shot down efforts by Epstein’s victims to invalidate the non-prosecution agreement, letting the co-conspirator provision stand. (We learned the same day that the federal government had told the court in 2011 that the agreement applied only in Florida, meaning in theory that co-conspirators could be charged in another state.) “There are co-conspirators involved in this whole thing,” Kuvin said. “By leaving it open like this, if they decide to try and file charges against Maxwell or others who were co-conspirators, I have no doubt that her attorneys will try and raise this as an issue, and this might give them immunity. It’s frustrating.”

On July 10, Acosta offered an explanation for the agreement: “The purpose in this case was to bring Epstein to jail, to put him behind bars. And so there were other individuals that may have been involved, in any type of conspiracy there are individuals around someone, the focus really is on the top player. And that’s where our focus appropriately was.”

But a “focus on the top player” doesn’t require freeing from liability the people who aided and abetted him—people who sent girls to Epstein so he could sexually assault them. The immunity clause drastically weakened the government’s case; with those four words, prosecutors lost whatever leverage they might have had to extract evidence from Epstein’s co-conspirators.

Alan Dershowitz, who represented Epstein during the 2007 case, offered me a much different but equally strange explanation for the immunity clause.

“That was designed to protect any women who Epstein had get other women,” said Dershowitz. Another member of the 2007 defense team described the provision as a way to “protect” the dozens of young girls who were victims of Epstein’s sexual abuse but who had also accepted money to recruit other girls, often from high school house parties.

“That is complete and utter crap,” Kuvin said. “Absolutely not true.” Kuvin believed the provision was crafted to protect people like Ghislaine Maxwell, the British socialite and longtime Epstein confidant accused of soliciting girls on the financier’s behalf. “They wrote that provision in to be as broad as possible because he wanted to capture, in that plea deal, all of his direct co-conspirators, like Ghislaine Maxwell,” Kuvin went on. “If they wanted to exclude any girls from prosecution, the government could’ve done that. They interviewed over 40 women, and they knew the names of all those women.”

The logic in Dershowitz’s explanation has several obvious flaws: One, it would seem to encourage perpetrators to victimize people to gain their assistance in a criminal conspiracy. Two, if the objective is to protect the victims of sexual assault, a provision that immunizes people who were involved in trafficking young girls to a child molester seems counterintuitive. And most obviously, while the defense claims this provision protects victims, it ultimately protects their assailant the most. In immunizing any of his potential co-conspirators, it keeps them from possibly flipping or providing evidence.

And to be clear, the government makes no habit out of cutting this sort of deal. Nobody I spoke to in reporting this piece had ever heard of a provision like it, Dershowitz included. When asked if the provision would in fact protect anyone who had helped Epstein acquire girls, Dershowitz answered, “Yes, those who helped him get girls.”

I asked why Acosta would have accepted such a broad provision in the deal. Dershowitz claimed Epstein “wouldn’t have accepted it unless [Acosta] did. That’s how negotiations go.” He also told me the feds had a “very weak case” and that the deal offered to Epstein “was not a sweetheart deal. I’d be happy to tell you if it was because I’d get credit for it.”

“That comment is absurd.” Kuvin said. “You know, what is atrocious is the volume and number of victims he had molested. You’re telling me there’s evidence that you have a serial molester of underage girls and that allowing him one year in a local jail on work release every day is a reasonable deal? That’s absurd. They just didn’t do their jobs—I mean the US attorney’s office, they completely fell asleep at the switch and did not do their job. If they did do their jobs, they would have been able to expand this investigation to New York, New Mexico, potentially Paris, and his island in the US Virgin Islands, and talked to all the girls who are now coming forward and telling their stories of what happened to them. But they didn’t. They just gave up. The US attorney’s office completely gave up on this case because they felt: ‘Oh, it’s just a couple of girls. It’s not a big deal, and this guy’s really rich, and he’s paid all these lawyers to fight us, and it’s just going to cause too much headache.’”

The parties anticipate that this agreement will not be made part of any public record. If the United States receives a Freedom of Information Act request or any compulsory process commanding the disclosure of the agreement, it will provide notice to Epstein before making that disclosure.

This coverup was recently found to be illegal.

“For those who think that perhaps money and power prevailed, and that connections to high-ranking individuals could exercise their influence, it cannot be ruled out,” said Gloria Allred, who is planning to file a lawsuit in New York on behalf of several of Epstein’s victims. “I don’t see a rational basis for it. I’m trying to stretch and think from the prosecutors’ point of view as to why they would accept this kind of deal—such a broad immunity that appears to be agreed to for potential alleged co-conspirators—and I can’t see any reason why they would accept that, or why they would want to cover it up.”

Allred is not one for conspiracy theories, but she said, “There’s a basis for people not to trust the answers that are coming out, saying he committed suicide.” She was referring to the 2007 plea deal. “I think the victims deserve the truth, and right now, they don’t have it.”

She continued, “The prosecution has a lot of explaining to do, and I don’t think they can explain this. There is no good answer—it doesn’t exist, and that’s why you can’t find it. Sometimes not finding the answer is the answer.”

You can reach Leland Nally at lelandnally@gmail.com.