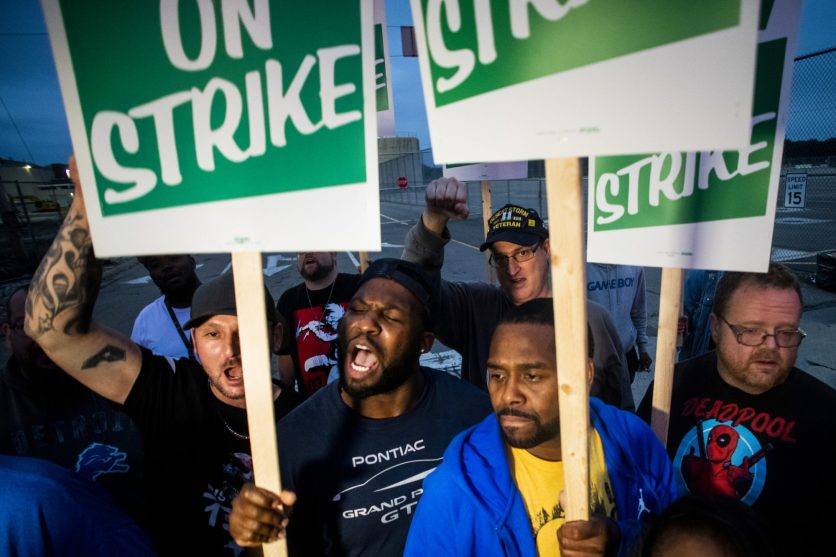 The news she had been anticipating finally arrived, and Leatrice Strong, a 33-year-old Black woman and mother of four, felt a wave of nervous energy wash over her.

Not because she doubted that striking against General Motors was the right thing to do. “We’re just all standing for what’s right,” she told me. But the moment was still “nerve-wracking” for her. Strong, a temporary worker, had been at GM for just two months, transporting materials around the Detroit-Hamtramck plant, and now here was word that she and 49,000 of her colleagues would be bringing the machinery of GM to a sudden halt. It’s not easy being a temp worker. It’s really not easy being a temp worker on strike. “It was kind of hard to keep up with everything,” she said—especially “not knowing how long the strike was going to last.”

Spend any time among the strikers right now and a picture emerges that should challenge one of the most broken assumptions about working-class life.

Of course, the stakes are enormous for all workers. The strike began September 16 after GM failed to reach an agreement with the United Automobile Workers. In a general sense, the walkout is an effort by the auto workers to reclaim some of the ground lost over the past dozen years. In 2009, GM received a $51 billion public bailout after filing for bankruptcy and in short order was flourishing again. Over the past three years the company has raked in $35 billion in North American profits. Its CEO, Mary Barra, has amassed a fortune, making over $20 million in each of the previous two years, 281 times the median GM worker, the Detroit Free Press reports. And since the bailout, the company has paid almost nothing in federal taxes.

But it’s the temporary workers like Strong who are at the center of negotiations, now in their third week. Temp workers make up 7 percent of GM’s US workforce and earn as little as $15 an hour at the start compared with the $30 an hour or so that so-called “legacy” workers make; temp workers are entitled to fewer benefits, too. These are features of the much-reviled tiered wage system that was installed in 2007, following a brief strike by 73,000 UAW members.

The wage tiers have awakened the old, overlapping fault lines of race and class within the auto industry. While the demographic breakdown for GM isn’t known, temporary workers across the American economy are disproportionately Black and Brown; economic precarity, of the kind described by Strong, has been more explicitly racialized.

Spend any time among the strikers right now and a picture emerges that should challenge one of the most broken assumptions about working-class life. Its icon is a middle-aged white man with rough hands and a long list of “what might have been”s. This image holds to this day despite being nonsense. By 2032, the Economic Policy Institute projects, a majority of the working class will be people of color. And nearly half of working-class adults are women. Right now the country’s most high-profile contract negotiations are underway in an iconically working-class profession. Those negotiations are being jammed up over the status of the most vulnerable, disposable class of workers—workers who tend to be Black and Brown. The GM picket line offers a glimpse of the new working-class arrangement, and it calls to mind a different sort of struggle, against a different set of “tiers.” Today’s fight for workplace equality doesn’t look all that different from yesterday’s fight for social equality.

“It’s all about making sure these temps…get the same pay as everybody else,” said Joe Ryan, who has worked at GM since 1978 and is responsible for training new hires in the plant. Even as GM dangles improved benefits for permanent workers, Ryan is unshakable. “If they talking about giving us $10,000 for a signing bonus,” he said “keep it. Don’t give it to us. Give it to the temps.”

I met Ryan on a Tuesday afternoon along the Detroit-Hamtramck picket line, where he coordinates strike activities. Some few dozen people were out picketing, and Ryan was on the move from one end of the strike area to the other, answering questions and preparing for the next shift of striking workers to arrive. Ryan has worked more years at GM than I’ve been a living specimen, yet he seems to be aging much more slowly than I am. He is clear-eyed on the rights of temporary workers, whose exploitation he views as plainly unjust. How else to describe a situation in which someone can be “working right beside me, doing the same job, and making less than me?” he asked in disbelief. “That ain’t right.”

In theory, this should trouble GM, a company that recognizes “the power of diversity” to “give GM a competitive advantage in the global marketplace,” Ken Barrett, global chief diversity officer, says in the company’s Diversity and Inclusion Report. The report chest-thumps that “GM supports equal pay for equal work” and calls “fair and equitable pay…an essential element of any successful business model.” In practice, the more insecure the temps, the better GM’s bottom line. More temps mean more “flexibility” for the company to add or fire workers at its fancy.

The racial aspects of this “flexibility” bear the imprints of an embarrassing history. As Thomas Sugrue writes in The Origins of the Urban Crisis, workers in post–World War II Detroit “forged some of the nation’s most powerful unions,” especially “the mighty United Auto Workers, one of the nation’s most powerful and influential labor organizations.” But the chances for improving one’s life, or even one’s position on the shop floor, were unevenly distributed. Black auto workers “faced formidable discriminatory barriers at some plants” where they confronted “bewildering and unpredictable” hiring practices. Once hired, blacks were funneled into “the least desirable jobs…in the dirtiest and most dangerous parts of the plant.” Employers “frequently used black labor as part of a classic divide-and-conquer strategy in the workplace”—as scabs, in this case.

Today, temps are completely at GM’s mercy in countless other ways. As the Detroit Metro Times reports, they can’t miss more than three pre-approved and unpaid days of work in a given year. Temps are also locked out of profit-sharing, in which the typical permanent worker gets around $1,000 for every billion GM makes in North American profits, despite the fact that many, like Strong, work full 40-hour weeks. And they can be forced to work every day—turning their weekend, a cherished labor victory, into a matter of company whim. But many hope to one day achieve full-time status, and so endure years of uncertainty and rickety economic prospects.

“It’s something that I’m cognizant of every day,” says Art Reyes II, a 52-year-old Flint electrician and third-generation GM employee who has worked in plants since he was 17. “People who are coming in as temps…are not afforded the luxury” that comes with full-time status, like preparing for a strike that could unfold into weeks.

For Reyes, this highlights both the difficulty and urgency of striking. “It is absolutely vital,” he added, “that our temps become permanent employees, because that will allow another generation…to have a middle-class lifestyle.”

GM also now turns jobs that used to be done by regular GM employees into contracting gigs, like custodial work. Even for Marjon Parham, a 44-year-old Black woman and engineering contractor at GM’s Detroit-Hamtramck plant, contracting work is “getting to be to a place where…there’s no security like it used to be.” After more than a decade as a contractor, she’s “a little nervous” because “everybody knows contracts are usually the first ones to be let go.” This is happening across the entire economy, as companies try to swap out traditional jobs with union-negotiated wages and benefits for independent contractors without them.

“We are our sisters’ and our brothers’ keeper,” Ryan said. “And we’re trying to do what our forefathers did back in ’36-’37” during the Flint sit-down strike. “You have to remember that that’s what they fought for—equality.”

Everyone, from the workers themselves to their supporters in the community, has shown “a lot of unity,” Strong said. And despite still feeling that knot of nervous energy, she hasn’t let herself be paralyzed by it. Instead, Strong has thrown herself into the arena. She now pickets three days a week, from 4 to 8 a.m. She feels “determined” when she’s out there, she told me, especially on days when her kids have joined her. “They came out and picketed with me. They showed their support for their mom—it felt great.”

“It feels good because I’ve never been in a situation like this,” Strong said. “I’m glad I can stand up for something that I feel is right.”

Eli Day is a writer and a native of Detroit, where he writes about politics, race, and class. His work has appeared in Mother Jones, In These Times magazine, Vox, The Root, Playboy, the Detroit News, and the Michigan Chronicle, among others.