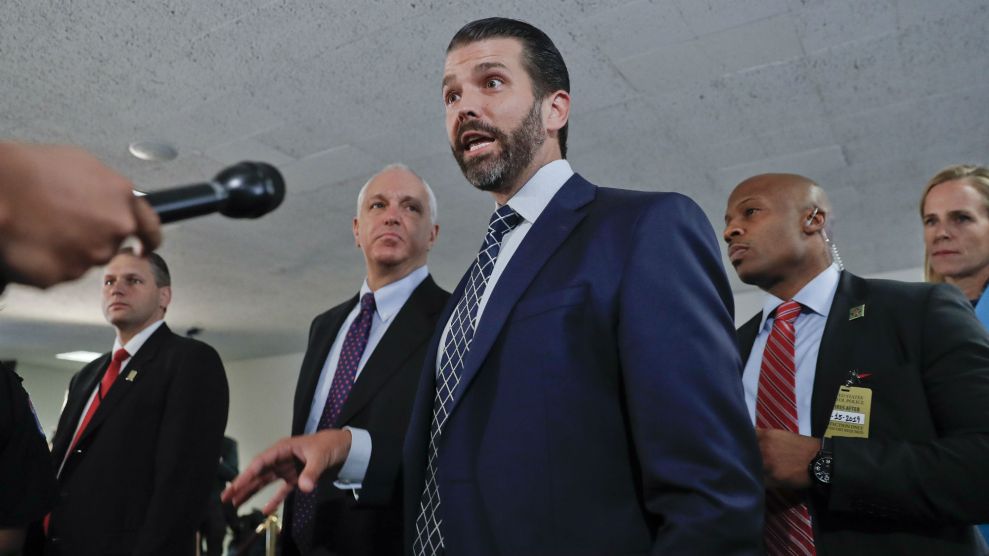 On Wednesday, Donald Trump Jr. joined his father’s ongoing effort to smear Joe Biden and his son Hunter over the younger Biden’s role as a board member of a Ukrainian energy company. In a tweet, Trump Jr. claimed the situation created the “appearance of impropriety” and represented a clear “conflict of interest.” Given that his father is the most conflict-riddled commander in chief in American history and the Trump family has profited in various ways through the presidency, Trump Jr.’s comments bordered on self-parody. But he did make a valid point: When the relatives of prominent political figures engage in overseas business dealings or receive payments or benefits from foreign individuals or entities, ethical issues often arise. Trump Jr., his siblings, and his brother-in-law, Jared Kushner, know this well—at least they should, considering the questions that have been raised about their families’ foreign entanglements.

Why didn't @JoeBiden recuse himself from dealing with Ukraine?

His son was on the board of a Ukrainian energy company that had been investigated by the prosecutor who Joe pushed to be fired.

At the VERY LEAST, there’s the appearance of impropriety. A clear conflict of interest.

The Trumps’ sudden outrage about conflicts of interest and corruption rings somewhat hollow. That is because, before Trump took office, his company cut deals in some of the most corrupt corners of the globe. In one case, the Trump Organization—in a venture in which Ivanka Trump took a lead role—entered into a hotel development deal in Azerbaijan, which ranks 152nd out of 180 on Transparency International’s index of the world’s most corrupt countries. The Trumps’ partner in that project? The son of the country’s then-transportation minister, Ziya Mammadov— an official once described in a US diplomatic cable as “notoriously corrupt, even for Azerbaijan.” In 2017, the New Yorker reported that the Mammadov family were linked to a corrupt scheme involving operatives from the Iranian Revolutionary Guard.

In Brazil, Trump joined forces with Paulo Figueiredo Filho, the grandson of a former Brazilian dictator, on a proposed hotel project. The deal came undone shortly after Trump’s election, when Brazilian prosecutors began investigating Figueiredo. He was arrested in Florida earlier this year and is awaiting extradition to Brazil for his alleged role in a scheme to divert pension funds into real estate developments—including the planned Trump hotel and tower in Rio de Janeiro.

If Donald Trump Jr. is really concerned about the appearance of impropriety, he could start by looking at the operations of his own family business, including the Trump International Hotel in DC. Not only is the hotel housed in a government building (conflict!), placing the government in the awkward position of being a landlord to the nation’s chief executive, but it has become a magnet for foreign officials (conflict!) and others seeking to curry favor in Washington.

The ongoing overseas business dealings of the Trumps pose another set of conflict-of-interest concerns. Before taking office, Trump pledged his company would engage in no new business deals abroad, but this ban on doing international business didn’t apply to projects that were already in various stages of development. Each of the Trump Organization’s foreign relationships carries its own ethical baggage, because foreign governments can attempt to use these ventures to influence the president.

Setting the stage for his conflicted presidency, Trump feted a handful of his foreign partners at his inauguration. Among those who attended was billionaire Hussain Sajwani, the chair of Emirati real estate company DAMAC, which licensed the Trump name for two luxury golf course developments in Dubai. Donald Jr. and brother Eric jetted to Dubai for the opening of one of the clubs shortly after their father took office, then vacationed with the Sajwanis in the Maldives. Sajwani is close to Dubai’s royal family—Dubai’s crown prince attended the wedding of Sajwani’s daughter last year, as did Donald Jr. and Eric Trump.

The Sajwanis have not hidden their interest in developing a close financial relationship with the Trumps, especially after Trump emerged as a powerful American political figure. At a press conference in early 2017, Trump bragged that Sajwani had recently pitched him on a new multibillion-dollar development (which he turned down). On Inauguration Day, Sajwani’s son posted on Instagram about how lucrative the administration would be for his family.

Also on hand for Trump’s inaugural was Indonesian media magnate Hary Tanoesoedibjo, with whom Trump inked a deal in 2015 to build two resorts in that country. Tanoesoedibjo, who has been likened to the Trump of Indonesia, has dived into that country’s complicated politics, funding an upstart political party and floating a bid for president himself—inspired, he said, by the path blazed by Trump. Foreign Policy described Tanoesoedibjo as “knee-deep in dirty politics” and dogged by accusations of tax evasion (which he has denied). In 2016, Tanoesoedibjo purportedly introduced Trump to Setya Novanto, who was at the time the speaker of the Indonesian parliament. Trump brought Novanto onstage at a political event—three months later, Novanto resigned from office after getting caught on tape asking for a $4 billion kickback from an Australian mining company. (Novanto has since been convicted in a separate corruption case.) Since Trump’s election, Tanoesoedibjo has bragged about his access to Trump and has hobnobbed with the Trump children on multiple occasions. This summer, Tanoesoedibjo purchased one of the Trump’s Los Angeles mansions, and in September he welcomed Donald Trump Jr. to Indonesia to help drum up publicity for the yet-t0-be-built resorts. While construction has yet to kick off, local media has reported that Chinese state-owned construction companies could be involved in the project, not a great look due to Trump’s ongoing trade war with the country.

Speaking of China, the country—not known for its friendliness to American brands claiming intellectual property rights—has granted Ivanka Trump 34 trademarks since her father took office. At least three were approved the same day she dined, in her capacity as a presidential aide, with Chinese president Xi Jinping at Mar-a-Lago in March 2017. Another batch of trademarks were granted in the days before and after President Trump publicly announced he would take steps to keep Chinese cellphone manufacturer ZTE afloat. Were these trademarks approved on their merits or as part of an effort to influence Trump administration policy? That’s the pesky thing about conflicts of interest—it’s difficult to know whether business arrangements are legitimate or an attempt at influence peddling. Ivanka’s in-laws, the Kushners, have been involved in their own questionable dealings in China, where Jared Kushner’s sister appeared to actively promote the family’s connection to Trump as she marketed an EB-5 investment program on behalf of Kushner Companies.

Donald Trump’s efforts to muddy a political rival with corruption allegations has already backfired, landing the president in the middle of a growing impeachment scandal. But the strategy—if this ham-handed effort at political dirt digging could be called that—also seems likely to lead to uncomfortable questions about the Trump clan’s own business dealings.