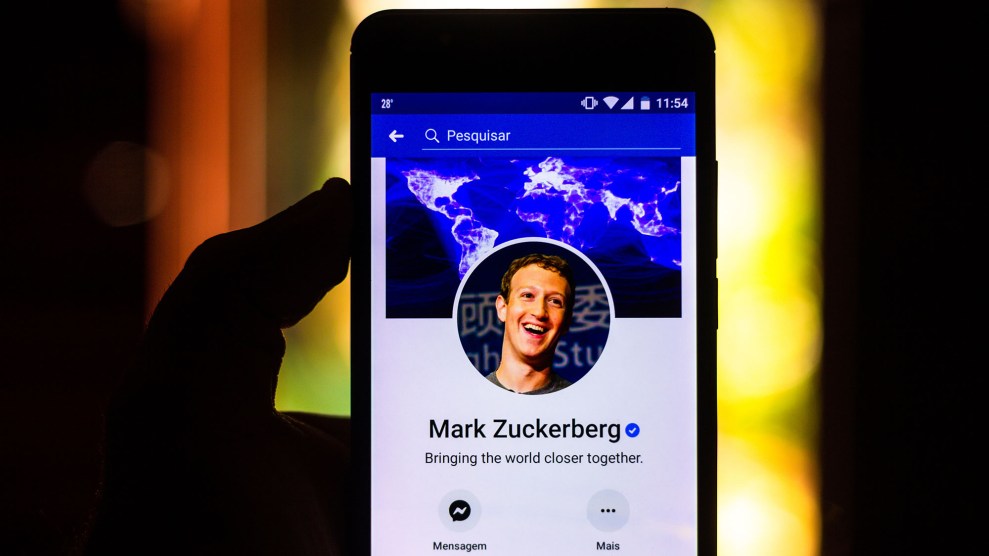 President Donald Trump is taking advantage of a Facebook exemption that allows politicians to lie in advertisements to spread disinformation about former Vice President Joe Biden’s 2015 diplomatic trip to Ukraine. Even though the ads contain misinformation, a Facebook spokesperson says they did not violate their company’s advertising policy because of a carveout for politicians.

The ads fly in the face of Facebook’s stated intent to crack down on disinformation, and appear to violate the company’s policies.

“Joe Biden PROMISED Ukraine $1 BILLION DOLLARS if they fired the prosecutor investigating his son’s company,” reads one ad the campaign started running on Wednesday, according to Facebook’s public ad archive.

“Joe Biden boasted that as vice president he threatened to withhold $1 billion in foreign aid from Ukraine unless they fired the prosecutor looking into a lucrative contract held by his son, Hunter Biden,” reads another Trump ad that began running the same day. The Trump campaign also ran ads with similar language earlier in the week which are now inactive.

The ads, which both include the false claim that Biden’s son Hunter was under investigation during the vice president’s Ukrainian trip, are accompanied by a video with a narrator voicing each ad’s text over a backdrop of ominous music and grainy footage.

The advertisements fly in the face of Facebook’s stated intent to crack down on disinformation, and would appear to violate the company’s policies “prohibit[ing] ads that include claims debunked by third-party fact checkers.” But a Facebook spokesperson told Mother Jones that because the disinformation comes directly from the Trump campaign, it is exempt from those rules as a result of other company policies that prevent it from taking action on the speech of politicians—regardless of how much or how brazenly they may lie.

According to Popular Info, the provisions that allow Trump and other politicians to lie in Facebook ads are the result of a policy change implemented last week. Facebook disputes Popular Information’s characterization, saying the changes don’t represent a shift in policy but were issued to make existing rules clearer.

The president’s campaign ads seek to further a narrative based on false assertions about the former vice president’s actions in Ukraine. While his son Hunter’s work with a Ukrainian energy company may have opened Joe Biden to charges of hypocrisy and been ethically problematic, factcheckers that Facebook has officially partnered with suggest his business dealings were legal and unrelated to the vice president’s work in making sure prosecutor Viktor Shokin was fired.

While Trump has tried to peddle a contrasting and unsubstantiated narrative that Biden tried to remove Shokin as a move to protect his son, there are at least two key details that suggest this wasn’t the case: Bloomberg News found that the investigation involving Hunter had been dormant for a year before Biden called for the Ukranian prosecutor to step down. Also, at the time there was separate international pressure for Ukraine to remove the prosecutor who was widely seen, by both foreign and local good government advocates, as broadly soft on corruption. Politifact, an official Facebook factchecking partner, has closely examined the claims and said it found no evidence to “support the idea that Joe Biden advocated with his son’s interests in mind.” Factcheck.org, another Facebook factchecking partner, came to the same conclusion.

Just last week, the company’s vice president of global affairs, Nick Clegg, wrote a Facebook post claiming that “when a politician shares previously debunked content including links, videos and photos, we plan to demote that content, display related information from fact-checkers, and reject its inclusion in advertisements.”

But neither Clegg’s post, nor remarks he gave in Washington, D.C. rolling out the policy, clearly noted that a politician’s own speech would be exempt from that fact-checking process and any ensuing consequences.

Facebook did briefly remove a nearly identical set of ads run by Trump campaign’s earlier in the week, however a company spokesperson explained it was because the accompanying videos included a clip of Joe Biden saying “son of a bitch,” confirming that the ads did not otherwise violate its rules again misinformation. The spokesperson clarified that the politician exemption might not apply if Trump or another candidate were to share content from a third party website that contained information flagged by one of its factchecking partners.

According to Facebook’s archive, the ads have been displayed 270,000 to 600,000 times. While the archive only provides spending ranges, the approximately $2,200 to $7,100 the campaign outlaid to boost the adds is a tiny fraction of the more than $1.5 million they’ve spent on ads on the platform just since September 24.

Earlier this week, the CEO of the Democratic National Committee, Seema Nanda, criticized Facebook for not stopping Trump from “mislead[ing] the American people on their platform unimpeded, saying the party was “deeply disappointed in Facebook’s decision to exempt statements from political candidates from its fact-checking policy.”