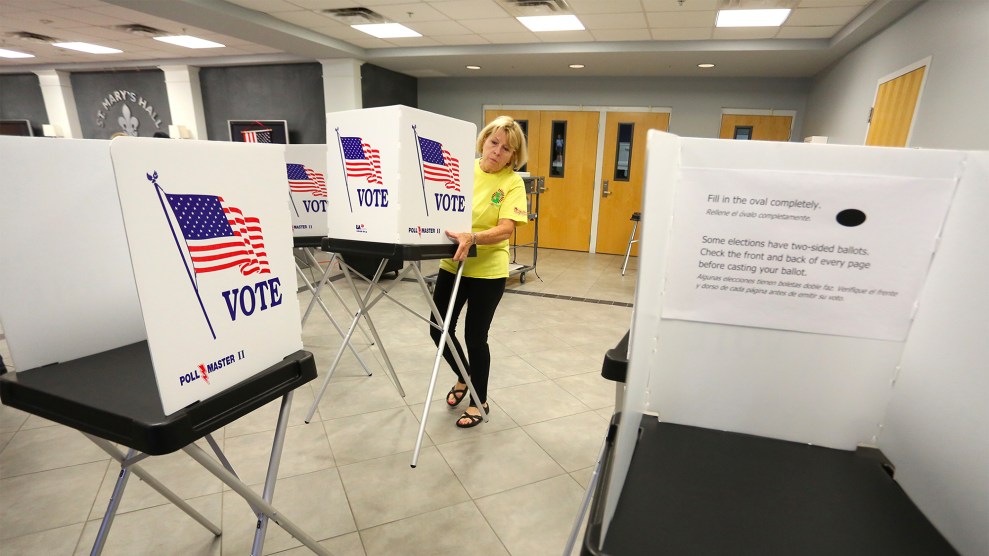 My colleague, and MoJo’s resident Big Brain on all things voting, pointed out this major legal win in Florida on Friday: A group of 20 people with felony convictions was suing the state over a new law requiring them to repay any fines or fees they owed before they could register to vote. The federal judge’s ruling was a temporary injunction, and represented, according to the New York Times:

… a rebuke to the state’s Republican governor, Ron DeSantis, and its Republican-controlled Legislature. Legislators had enacted a law requiring the fine and fee payments this year after voters resoundingly approved an amendment to the State Constitution that restored voting rights to as many as 1.5 million former felons.

The law was widely seen as an attempt to suppress voting by the former felons, many of them African-Americans or Hispanics who appeared likely to support Democrats.

Here’s Ari with the crucial bit from the ruling:

This is a great opportunity to remind you of Ari’s work on this issue in Florida, where he documented the lead-up to the nation’s largest expansion of voting rights in decades, last November.

In his reporting for a big Mother Jones feature article on Florida’s Amendment 4, Ari met bikers in MAGA hats, African American preachers, convicts and their families, along with Floridians from all walks of life banding together to restore the right to vote to ex-felons. Ari’s reporting shows how even in a state that has a 150-year history of engineering laws to deprive African Americans of their civil rights, it is possible to change hearts and minds. Hear from Desmond Meade, one of the leaders of the Amendment 4 campaign, who was released from prison addicted, unable to find work, and homeless, but who ultimately led this successful campaign, on this episode of the Mother Jones Podcast, below: