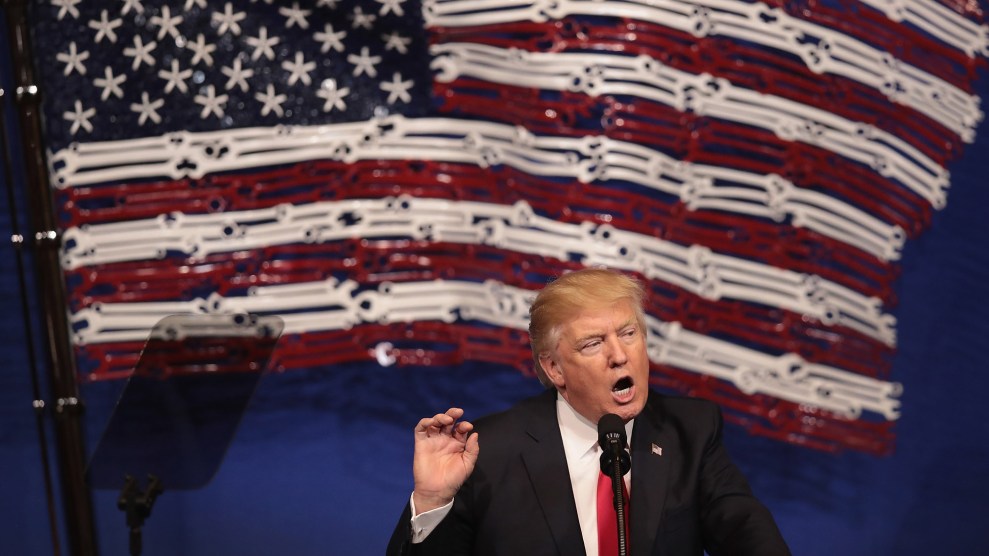 This story is part of a collaboration with Reveal from The Center for Investigative Reporting.

Since 2017, as part of its efforts to “hire American,” the Trump administration has been aggressively denying applications for H-1B visas. Yet a record number of those denials have been overturned on appeal, suggesting that the administration has been wrongfully rejecting qualified applicants for these coveted visas for high-skilled immigrants.

While President Donald Trump’s crackdown on undocumented immigrants has grabbed public attention, his administration has been dismantling the work-based immigration system as well. In April 2017, Trump issued the Buy American and Hire American executive order, which he promised would reform the high-skilled immigration program to “create higher wages and employment rates for workers in the United States.” Since then, US Citizenship and Immigration Services (USCIS) has been denying and delaying record numbers of H-1B visa petitions. The denial rate for first time H-1B applications went up from 10 percent in 2016 to 24 percent in 2019.

A rise in rejections of “tech visas”

H-1B visas, also known as tech visas, are temporary work permits filed by American businesses that want to hire high-skilled immigrants for jobs where there’s a shortage of domestic workers. The visas are widely used by the technology industry, but H-1Bs are also issued to universities, hospitals, pharmaceutical companies, and management consultants.

If an employer’s H-1B visa application is denied, they may ask USCIS’s Administrative Appeals Office to reexamine the decision. Typically, a small percentage of denied applicants file an appeal, mostly because the appeals office takes six months to a year to respond. Most employers prefer to refile the application, which is faster.

Historically, the appeals office usually sides with the agency’s original decision. Between the 2014 and 2017 fiscal years, it reversed about 3 percent of the H-1B decisions it reviewed. Yet in 2018, it overruled USCIS in nearly 15 percent of H-1B appeals. It remanded more than 7 percent of decisions, sending them back to be reevaluated, compared with 4 percent in the previous four years.

More H-1B decisions are being overruled

Immigration attorneys say many H-1B cases that would have been slam-dunk approvals during the Obama administration are now being improperly denied, which would explain the increase in reversals upon appeal. “Previously, deniable cases were being denied and approvable cases were being approved,” says William Stock, a founding member of Klasko Immigration Law Partners, who specializes in employment-based visas. “What we are seeing now is that approvable cases are being denied, so what the [appeals office] is saying is, ‘This is an approvable case, it shouldn’t have been denied.’”

Approximately 85,000 H-1B visas are issued annually. Jobs that qualify for an H-1B usually require visa holders to have a bachelor’s or an advanced degree in fields related to their positions. H-1Bs are typically issued for a three-year period and may be renewed for another three years. If a visa holder has applied for residency by the end of those six years, they may renew their H-1B every three years until they receive legal permanent residency—a wait that may stretch over years or decades.

The idea to restrict H-1B visas was in the works even before Trump took office. Stephen Miller, a senior advisor to Trump and the architect of the president’s immigration policy, talked at length about curbing H-1Bs in a series of radio interviews on Breitbart News Daily in 2015. “We are talking about less-skilled foreign guest workers that are less educated than Americans, who are paid less than Americans, who know less about the computing industry and about the technology industry than Americans,” Miller said about H-1B visa holders.

Since Trump took office, USCIS has released several memos and directives that take a stringent view of who is eligible for work visas. In the past, a qualified applicant with a bachelor’s degree related to their “specialty occupation” could reliably get an H-1B. Yet in a memo issued in March 2017, USCIS made it harder for people with relevant degrees to get H-1B visas, particularly computer programmers. Another memo instructed USCIS officers to look at every H-1B petition as if it was being evaluated it for the first time, even if the applicant had been approved in the past.

Together, the two memos have changed the rules of the game for H-1Bs. Jobs that routinely counted as specialty occupations, such as computer systems analysts, no longer easily qualify for H-1Bs. Many visa holders who have lived in the United States for years are suddenly vulnerable because they may not qualify for a visa that they have received many times in the past.

“Attacking legal immigration is kind of a stealth strategy. But in fact this is a wholesale isolationist administration.”

Bruce Morrison, a former Congress member from Connecticut who co-sponsored the Immigration Act of 1990, which established the H-1B program, says the administration’s actions violate the spirit of the program. “Attacking legal immigration is kind of a stealth strategy,” he says. “It’s one in which people who are just listening to the news are easily seduced into thinking this is all about protecting the border or protecting our security or making sure the people who are here are here legally. But in fact this is a wholesale isolationist administration. It doesn’t like anything that isn’t stamped ‘Made in America,’ whether it’s the individuals or whether it’s the products.”

The rising rate of appeals and reversals of decisions suggests that the officials who examine H-1B applications have been struggling to make sense of the stricter policies. Lynden Melmed, the former chief counsel at USCIS during the Bush administration, believes the Trump administration has intentionally given the agency’s officers more leeway by removing some of the guardrails that had once ensured consistent decisions. Hundreds of pages of USCIS documents uncovered by the American Immigration Lawyers Association through a Freedom of Information Act lawsuit reveal that more than one year after the new rules were announced, USCIS officers and staff still had many unanswered questions. In an email sent in May 2018, an adjudications officer acknowledged these concerns, noting that “more detailed guidance related to this issue” was still being drafted.

Experts say the administration’s new policies misapply the established definitions of the specialty occupations that qualify for H-1Bs. “The statutes and regulations set forth have very clear criteria on who qualifies as a specialty occupation,” says Diane Rish, associate director of government relations for the American Immigration Lawyers Association. “The agency wouldn’t apply the regulation correctly and erroneously denied applications, whether it’s the fault of training or an analysis not properly done.”

A USCIS spokesperson noted in an emailed statement that only 1 percent of all H-1B denials are appealed and that the appeals office still sides with USCIS in a majority of cases. He said the overall trends are in line “with a series of agency reforms designed to protect U.S. workers, cut down on frivolous petitions, strengthen the transparency of employment-based visa programs, and improve the integrity of the immigration petition process.”

Legal scholars wonder how long the appeals office will continue to side with H-1B applicants. “It’ll be interesting to see, if the [appeals office] has been serving as a check, how the administration will react to that,” says Jill Family, a law professor at Widener University who focuses on immigration law. Employers who don’t agree with the H-1B rejections don’t have to file appeals with the USCIS. They can also challenge the agency’s decisions in federal court, and experts say more are doing so than in the past. “It’s hard to say if this is a one-year flip in the data or an actual trend,” says Stephen Yale-Loehr, a professor of immigration at Cornell University. “It remains to be seen whether that continues or whether the [appeals office] also starts to toe the administration line and goes back up to the 90 percent level of agreeing with the initial denials.”