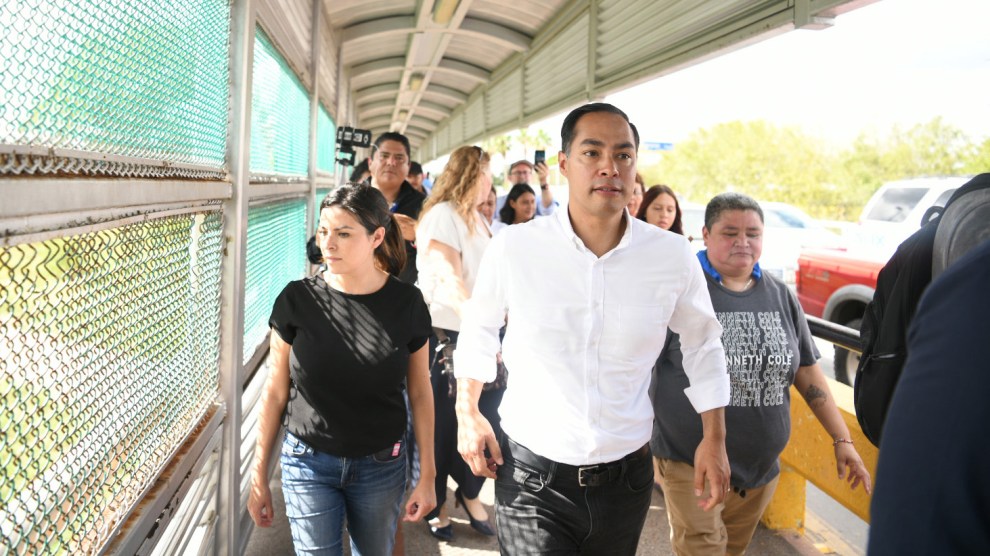 Democratic Presidential hopeful Julián Castro escorts a group of migrants to the Brownsville Port of Entry Monday morning. He asked port officials to allow the migrants to petition for asylum in the United States. Courtesy of Julián Castro

Democratic presidential hopeful Julián Castro visited a makeshift camp on Monday in the Mexican city of Matamoros, where asylum-seekers are being “forced to live in squalor” because of a Trump administration policy that has stranded some 50,000 people just south of the US-Mexico border. He was there to escort a group of vulnerable migrants as they petitioned for asylum at the port of entry, something that has become increasingly more difficult in recent months.

The Migrant Protection Protocols policy, also known as “Remain in Mexico,” forces migrants who ask for asylum at the border back to Mexico—often for months—to wait on their day in immigration court. The policy started out in the San Diego area at the beginning of the year and has since expanded along the border to South Texas, forcing tens of thousands of migrants to wait in dangerous Mexican border towns—including Matamoros, which sits across the Rio Grande from Brownsville, Texas, and has been given a level 4 “do not travel” warning by the US State Department.

In a tweet sent Monday morning, Castro didn’t mince words about Trump: “Make no mistake: his agenda is killing people—and it’s on purpose.”

What I saw in across the border in Matamoros, Mexico is a national embarrassment—one entirely of Trump’s creation.

Make no mistake: his agenda is killing people—and it's on purpose. pic.twitter.com/JU7MuskcL2

It was the first time Castro visited one of these camps in Mexico, and he urged others to do the same “because it truly drives home how much we’re failing these people and unnecessarily harming their lives.”

I spoke to the former secretary of housing and urban development on the phone as he was driving back to San Antonio. Our conversation has been edited for content and clarity.

Why did you travel to Matamoros?

I went to Matamoros today to spotlight the suffering of people there who are living in squalor, drinking dirty water, not eating enough food, and being subjected to crime, all because of this administration’s backwards policy to keep them out of the US while they seek asylum. Today I took 12 people [to the port of entry]—eight of them were from the LBTQ community, and one family with a person who is disabled—to appeal their placement in the [Migrant Protection Protocols] program. I did this because under the terms of the MPP program, people who have a mental health or physical disability are not supposed to be forced to remain in Mexico. Members of the LGBTQ community who have been persecuted, who have been threatened and suffered beatings, often have PTSD, and that should qualify as a mental health issue. The person who is deaf obviously shouldn’t have been placed in the MPP program in the first place.

What did you say when you walked up to the port of entry?

I presented myself to the border agents there, asked for a supervisor, and said we were presenting these people who should not have been in the Remain in Mexico program to begin with. At that point they were taken in, and they were given an opportunity to make their case. Most of the LGBTQ migrants were from Cuba, and the rest from Central America.

Did you get any pushback from the agents at the port of entry?

No, they were professionals.

What was the most upsetting thing you saw today?

“There are many children who are sick, who are not getting any kind of education, and who are desperate.”

The saddest thing that I saw today was a mother with her young child on her lap and the child looked thin, probably from lack of eating much. He seemed weak and very fatigued, probably because of the heat, or perhaps because they don’t have clean drinking water. There are many children who are sick, who are not getting any kind of education, and who are desperate.

You’ve been speaking against the MPP/Remain in Mexico policy for most of the year, and you and I spoke about this back in May, but was there anything that surprised you today seeing it firsthand—especially having crossed into Matamoros?

The scale of the squalor. They’re up to more than 1,000 people there in tents right on the other side of the border. Plus, Matamoros is the newest site; you have more than 3,000 people in Nuevo Laredo and many more in Tijuana. The scale of the desperation is growing quickly as the policy expands. This is a humanitarian disaster that should be ended immediately.

Are you concerned with what the asylum-seeking process in the United States has turned into under this administration?

“We should stop playing games with people at the border.”

Absolutely! It’s become a sham! First of all, we don’t have an immigration court system that is properly equipped to deal with the asylum claims, and it should be independent from the Department of Justice. We also should recognize people who are victims of domestic violence and gang violence in asylum claims. We should stop playing games with people at the border.

What was the outcome for the 12 people you took to the port of entry?

We’re waiting to get the news, they are going to go through an interview their appeal of getting put through the MPP process, and we should find out at some point today what happened to them. We’re going to follow up with the Texas Civil Rights Project; they have attorneys who are in contact with each of them.

Now, this was just a handful of people on one day, at one port of entry. We know that tens of thousands are being forced to wait in dangerous Mexican border towns for many months. Knowing the scale of this, what are you feeling right now as you drive away from the border?

“Desperate people are knocking on our door, and instead of allowing them safety as their asylum claim is determined, we push them to unsafe places along the border.”

This is a betrayal of our values and who we should be as a country, because desperate people are knocking on our door, and instead of allowing them safety as their asylum claim is determined, we push them to unsafe places along the border and have made their lives much worse. Like a lot of people, I’m frustrated by this administration’s cruelty, and I feel more determined than ever to end this policy. There’s also, of course, a sadness, especially for the children who are going through all of this.

You’ve said that if elected president, you would quickly sign an executive order to end this policy. What else needs to happen, both short-term and long-term, to properly address asylum claims at the border?

We need an independent immigration judiciary with enough judges and support staff to hear all of these claims in a timely manner.  We also need to put more resources into getting people connected with family members who are already in the United States so they can find a loving home instead of placing them in the detention facilities. It would be more cost-effective than building more detention facilities. In addition to that, Mexico has a role, as well, in doing what it can to ensure that people have basic living conditions and that they’re safe.

Is there an image from your trip this morning that you’d like people to know about?

Yeah, we went and laid flowers along the banks of the [Rio Grande] river where there were crosses to commemorate the death of a number of migrants, including Oscar and his daughter Valeria. And in that same river just feet away from those crosses little children were playing and bathing themselves. The river is heavily polluted, and that’s the water that people are bathing in.

Oscar and Valeria Martinez died on these shores—desperately crossing the river as a last resort for asylum.

They aren’t the first to be killed by Trump’s immigration agenda, and they won’t be the last if we don’t act soon.#LetThemIn pic.twitter.com/QjosYWPHQX

Note: About two hours after I spoke with Castro, he learned that the 12 asylum-seekers he helped that morning had been sent back to Mexico. They presented their cases for why they feared returning to Mexico, and why they should be exempt from the Migrant Protection Protocols, but US Customs and Border Protection officials denied their claims.

UPDATE: hours after we were told LGBT and disabled asylum seekers would have their cases heard, they have been returned to Mexico.

By law, these migrants are supposed to be exempt from the Remain in Mexico policy—but @CBP had decided to ignore their due process. Outrageous. https://t.co/bLaThZMNFJ